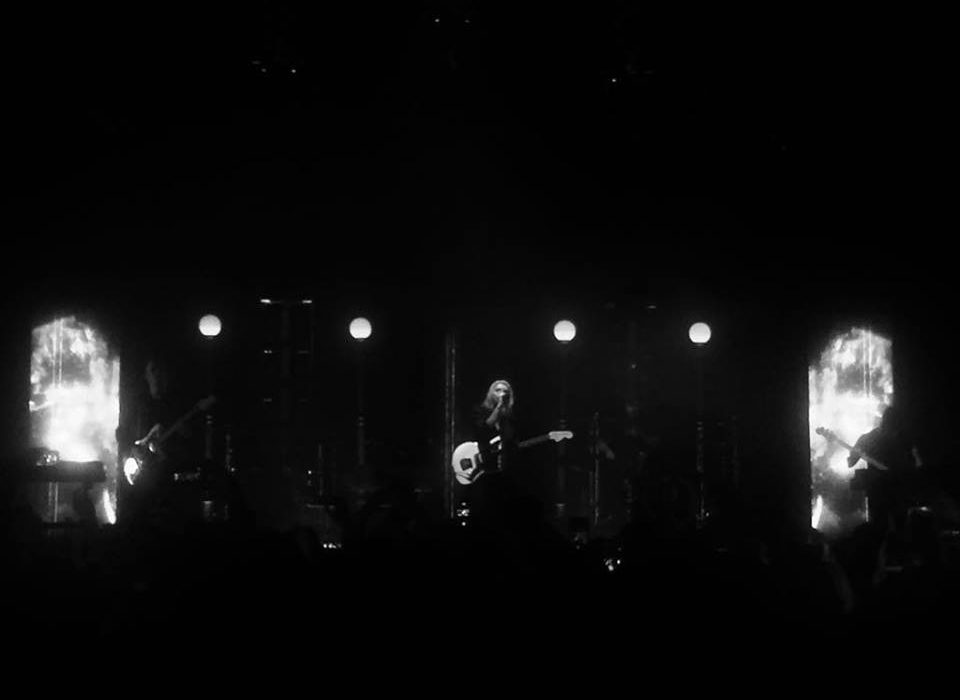 US electropop band PVRIS, pronounced Paris, came to the O2 Apollo Manchester on the 28th of November during their brief tour of the UK.

Lead singer Lynn Gunn announced that the show was the biggest of their career: the anticipation and buzz around the venue from the crowd was to match. The show came after the recent release of their new album, All We Know of Heaven, All We Need of Hell, the band playing all the biggest songs from their new record for their new record crowd.

After a meaty opening set from Nashville pop rockers COIN, which was well-received by the crowd, PVRIS entered onto stage to an explosion of cheers and screams. Their opening song ‘Heaven’, from the new album, was an enormous hit and completely set the tone for the rest of the night. This was closely followed by their debut album killer single ‘St. Patrick’, a combination of songs which allowed Gunn to race out of the blocks straight into bold, powerful vocals from the off.

In fact, every song the Massachusetts three-piece played seem to be a popular one, recent releases received just as jubilantly as established hits. This is an incredibly encouraging sign for a band always on the rise. Perhaps the energy of the crowd was drawn from the energy of the band onstage themselves, particularly Gunn who, silhouetted over a backdrop of dazzling lighting, leapt and bounded around stage with confidence and enthusiasm. This enthusiasm was equalled by sheer ability: Gunn recently won Best Vocalist at the 2017 Alternative Press Music Awards and that talent shone through here with ease. It’s not just her voice either: on multiple occasions throughout the show Gunn leapt onto a secondary drum kit during instrumentals and thrashed along impeccably.

Putting an interesting twist on the studio recordings, PVRIS included some highly stripped down versions of their songs, with only guitarist Alex Babinski and Gunn onstage. Here, particularly during the performance of ‘Same Soul’, that strong voice reached its very pique. This was an impressive and mature selection, a welcome refrain from the otherwise relentless pop rock on display and further enhancing the more widely involved songs to come. The whole band leapt back into energetic performance for a version of ‘What’s Wrong’, markedly heavier than its album track: some great variation, with great balance.

‘My House’, the finale of their set, had the whole crowd jumping, cheering and, immediately afterwards, crying out for encore. These shouts were gladly obliged with the band returning to stage for ‘No Mercy’, during which Gunn paraded around the stage draped in an enormous LGBT flag thrown up from fans in the crowd: a particularly powerful way to end a powerful performance. If they put on a show anywhere near this one whenever they’re on a stage, PVRIS will be well on their way to becoming a huge headline act.