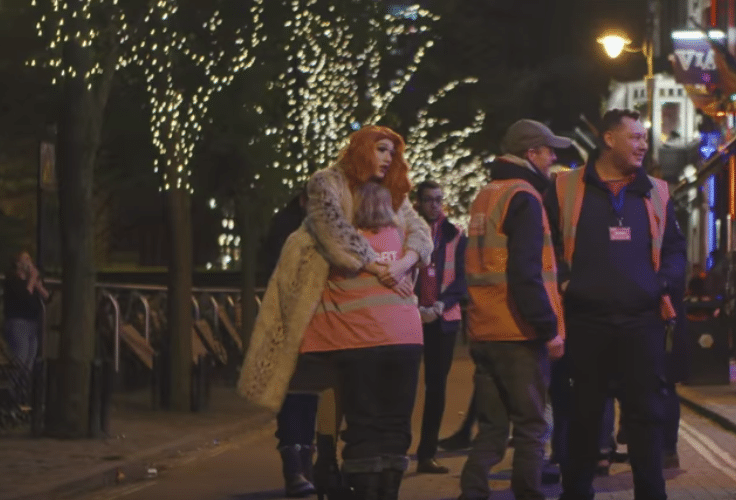 The Village Angels: The everyday heroes of Manchester’s Village star in new documentary

A community safety initiative set up by a Mancunian charity is now the focus of a new documentary and national initiative to make UK nightlife more LGBT inclusive.

The Village Angels are a group of volunteers who keep nightlife revellers safe in Manchester’s Village; it might be that someone has had a bit too much fun and needs help ordering a cab home. Maybe someone has been made homeless and doesn’t know where to turn. Maybe someone needs a shoulder to cry on. Whatever the problem, the Angels are the everyday heroes on hand to provide this support.

Set-up by LGBT Foundation in 2011 — the charity that supports lesbian, gay, bisexual and trans people in the UK — the Angels have offered a non-judgemental street service for visitors to Canal Street and the surrounding areas of Manchester for six years. Following the success of the initiative, the Angels has expanded into the Village Haven. This is a newly opened space in the Village, that offers support and a safe space for those who are unable to stay safe or get home without coming to harm. It operates each Friday and Saturday until 5am.

In 2018, the ambition is to expand the operation across the LGBT community, working with Smirnoff to make nightlife a safer, more inclusive and understanding space for everyone.

The work of the Angels can now be seen first hand, in a new documentary made in conjunction with LADbible. The documentary follows Josh, who got involved with the Angels after a member of his rugby team was punched in a homophobic attack and the Village Angels helped him. He now leads a group of volunteers every Friday night – allowing him to absorb the fun and energy of the Village without having a hangover on the rugby pitch the following afternoon.

It’s not an easy job, but as you see in the film, the volunteers remain upbeat and positive and are always full of compassion for those they encounter having a bad time. One minute they’re an information service for tourists to this LGBT mecca, the next they’re responding to an assault in a nightclub.

The team’s hard work and dedication to helping others is inspirational. But their goodwill can span further with more volunteers and donations, allowing for growth of the street teams, development of the Haven and expansion outside of Manchester.
Josh Sanderson-Kirk, the star of the documentary and Village Angels shift lead said “We need as many people as possible to volunteer with us. And obviously, of course, it also comes down to money.

“We need money for equipment, we need money for the things we hand out – the plasters, the foil blankets and those big ticket items like the defibrillator. We need more of those to make sure we can do the job that we want to be able to do.”

“I’d love to see the Angels in London, in Birmingham and other big cities with gay and LGBT quarters. If they ever want any help [in setting up the scheme] I’m sure the Angels would be more than happy to help.”

Jessica White, Community Safety Coordinator at LGBT Foundation, said: “Our volunteers are at the heart of our work and are the lifeblood of our organisation. Many of our vital services would not exist without the support of our amazing volunteers. This is especially true of the Village Angels and Village Haven programmes”

“In the New Year we’re hoping to make new additions to our amazing team to continue and expand the work we do. We need as many people who are willing and who are able – and also enthusiastic – to do the role that our brilliant volunteers do”.

Following the release of the documentary LGBT Foundation are on a recruitment drive to add more people to the Village Angels team, they are particularly interested in recruiting students onto their team. The details of this can be found here.