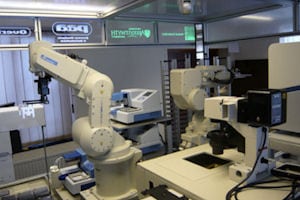 There are currently a number of drugs being used to treat malaria, but the disease is becoming increasingly resistant to such drugs. Malaria kills over 500,000 people each year, many of these deaths are in Africa and Southeast Asia and concern is rising over the disease becoming untreatable.

When a malaria infected mosquito bites someone, the parasites enter the bloodstream through the mosquito’s saliva. The parasites then make their way to the liver, where they reproduce and take over red blood cells to spread around the body. This causes the observable symptoms of malaria, which can be potentially life-threatening.

Triclosan is an ingredient commonly found in toothpaste and may be a promising step in developing a new treatment to stop drug-resistant strains. It helps prevent the build-up of plaque by inhibiting an enzyme known as enoyl reductase (ENR). Previously, scientists found that triclosan can stop the growth of the malaria parasite when it is in its later stages, and it was thought to be because of the ENR enzyme.

But new research, with robot scientist Eve’s help, shows that it is actually the inhibition of a different enzyme, DHFR, that is more significantly implicated in the stopping of malaria parasite growth. This enzyme is found in the liver, which is especially promising as it may mean that a drug could be developed which can target malaria in its earlier stages when in the liver, as well as later blood-stages.

Current drugs already target DHFR and inhibit the enzyme, but in Africa resistance to such a drug is not uncommon. Scientists in Cambridge were able to show that triclosan could act on this enzyme even against drug-resistant parasites.
Eve, the robot scientist, was designed by scientists at the University of Manchester, with colleagues at the Universities of Aberystwyth and Cambridge, to help speed up the drug discovery by automating the process. Hypotheses are automatically developed, tested and results interpreted by Eve, who is capable of testing over 10,000 compounds per day.

“Artificial intelligence and machine learning enables us to create automated scientists that do not just take a ‘brute force’ approach, but rather take an intelligent approach to science”, says Professor Ross King of the Manchester Institute of Biotechnology, who led the team that developed Eve. He went on to explain “this could greatly speed up the drug discovery progress and potentially reap huge rewards.”

Currently, Eve is able to use machine-learning and statistics to predict new structures that may score better in tests of quality. It is thought that future versions of Eve may even be able to incorporate a feature where she is able to synthesise compounds.