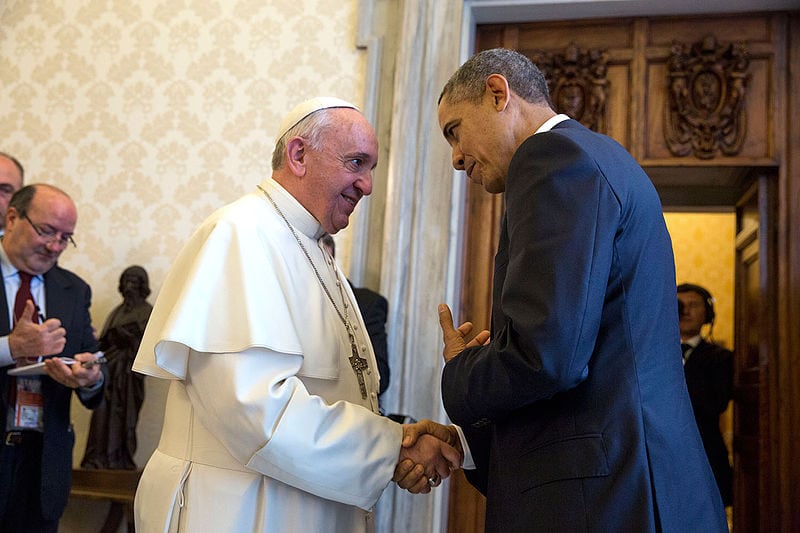 Manchester is arguably one of the UK’s most left-wing cities, and yet opposite the university’s main campus is Holy Name Catholic church, dominating part of Oxford Road. It’s a beautiful building both inside and out, yet you can’t help but feel like it is the sight of two worlds crashing — the liberal world of the university and its students, and that of the church and its socially conservative views.

The modern narrative of religion in the West is that it is the antithesis of progress, especially Catholicism. With its ardent opposition to abortion, traditional attitude towards homosexuality and its numerous past issues with paedophilia, Christianity has for the past 50 years been decades behind what is widely socially accepted. Churches are now preaching beliefs that even large parts of its congregation do not even believe in anymore.

There is now a commonly held idea of religion as purely politically conservative and the rhetoric used by the right in the US and UK supports this. Republican Party slogans and campaigns have for years appealed to extreme evangelical Christians in America, combining God and capitalism in what has proved to be the most unholy of unions. In the UK it is less subtle, but no less the case; Theresa May once claimed that “her faith in God will guide us through Brexit”, but the way things are going her faith must not be very strong.

Yet Christianity should be a progressive force in politics and indeed has been. Socialism in Britain has always had a unique and close bond with Christianity, an ethical and Christian socialism being a major influence on the Labour party far more so than Marxism. It is motivated out of a belief in a universal humanity and the idea that vast inequality and unbridled capitalism goes against the core teachings of Jesus, who some like to see as the first socialist. The responsibility we have for one another and the need for an inclusive economy are much more Christian than the individualistic ideals of conservatism and our current neoliberal discourse which has merely strategically co-opted religious language, using and twisting religion since the Thatcher and Raegan days. Capitalism is rooted in greed and sin, representing the very worst of humanity and is far from “love one another as I have loved you”.

Its influence on Labour and progressive British politics in practice is not hard to see, especially in earlier years; many of the early liberal reformers and socialist thinkers were influenced by the Catholic Thomas More’s ‘Utopia’, and The Fabian Society and its members, such as R.H. Tawney along with Sydney and Beatrice Webb, helped found Labour whose very first MP and leader, Keir Hardie, was deeply motivated by his religion, his evangelical preaching in his earlier years helping him to learn the art of public speaking.

Today we can still see Christianity’s progressive core, despite the discourse going against this. In Ireland’s referendum on Gay marriage in 2015, 60 per cent of voters backed it in a nation in which 80 per cent identify as Catholic, meaning at least half of all Catholics supported it. In the last presidential election whilst evangelical Protestants voted overwhelmingly for Trump a plurality of Catholics voted Clinton while Pope Francis has stirred continued controversy about whether he is himself a socialist after making comment after comment against capitalism which he describes as “the devil’s dung”.

One of the Labour Party’s anthems is William Blake’s “And Did Those Feet”, as a result of Clement Attlee’s love and constant reference to it. Himself not religious, Attlee was obsessed with the hymn for its idea of fighting “’til we have built Jerusalem in England’s green and pleasant land” and ultimately this represents what is at the heart of Christianity and Catholicism; building a better world for everyone, “a new Jerusalem”, and ridding the world of sin, and therefore capitalism. The Catholic church especially has become too focused on social views based on the old testament that a large part of even it’s own followers no longer believe in, and that society is rightly leaving behind and if it continues to refuse to change, it will die. It has become distracted from the core, progressive essence of Christ’s teachings.

Any Christian that claims their faith supports the poverty, inequality and moral backwardness of neoliberal capitalism is utterly misguided. Even more so is this the case for Catholics, who have been persecuted effectively in its name. In the words of none other than Pope Francis, “Once capital becomes an idol and guides people’s decisions, once greed for money presides over the entire socioeconomic system, it ruins society, it condemns and enslaves men and women, it destroys human fraternity, it sets people against one another and, as we can clearly see, it even puts at risk our common home.”