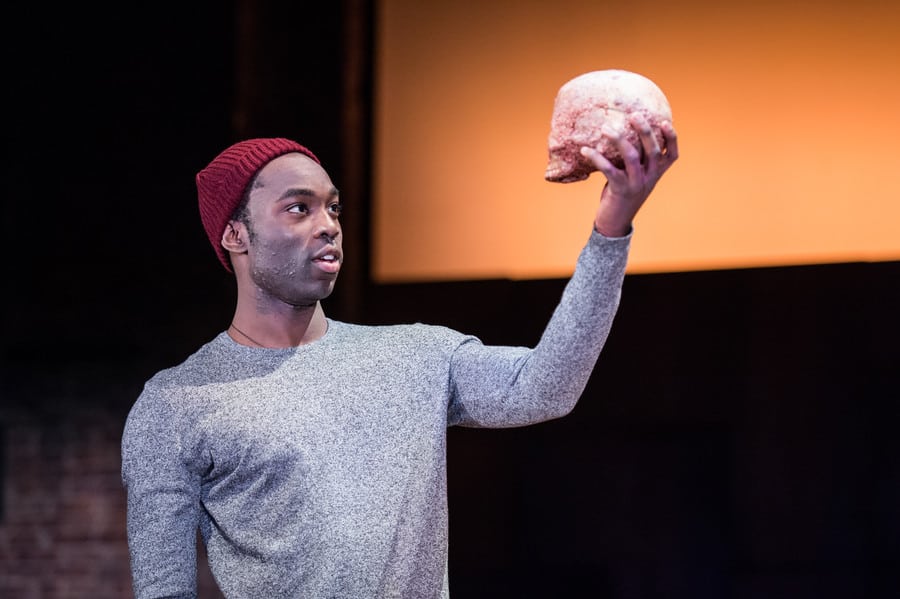 Review: Hamlet at The Lowry

Shakespeare’s classic came to life in this vibrant and colourful adaptation by the Royal Shakespeare Company (RSC).  It ran at The Lowry in Salford Quays from the 26th of January to the 3rd of February, and my only regret is that it wasn’t on for longer to be able to go again! I went to the final performance on Saturday the 3rd.  This special take on Hamlet finally made its way up north after being an outstanding success in Stratford-Upon-Avon in March 2016.

Hamlet is the story of the Prince of Denmark’s downfall after discovering his father was murdered by his uncle, who then becomes king and marries his mother one month after committing fratricide.  The Prince, Hamlet is driven mad by his hunger for revenge, which ends up being not only his downfall but also of his loved ones.  He is often considered a classic example of a ‘tragic hero’.

Paapa Essiedu owns the role of Hamlet like no other.  He deserves the accolades he has received so far. Hamlet’s tortured soul was clear for all to see through his expressive body language and facial expressions, yet it was not his psychological degradation that rendered his performance unique. Essiedu gave the Prince a touch of cheekiness, a sort of adolescent naughtiness that made the audience laugh even at the most inappropriate times.

This, as well as his procrastination in avenging his father, only made him a more relatable character — unlike some of the heartless bloodshed that takes place in many of Shakespeare’s other plays such as Titus Andronicus and Macbeth.  Essiedu made Hamlet feel extremely human, introduced by the opening scene where he is graduating from University.  My fellow course mates and I in the audience couldn’t imagine coming home after graduating to a murderous uncle and being given the pressure of avenging our father by his own ghost!

The set and props were kept relatively simple throughout the play, which allowed the costumes and colours of Hamlet’s tapestries to take centre stage, literally and figuratively.  This modern day Hamlet was shaped by African, Caribbean and European influences, making it a truly international play.  The brightly African-inspired costumes capture the audience’s attention from the moment we meet the Danish Royal family, and are a stark contrast to Hamlet’s all black outfit.  Hamlet’s clothes then become the symbol of his madness, as he goes from that simple modern all black attire to an all white yet completely paint stained suit.  In his hysteria he therefore becomes the typical crazy painter that uses art to demonstrate the emotional conflicts raging within him.

Seeing this performance of Hamlet at the Lowry has definitely made me want to explore more of the theatrical scene in and around Manchester, as well as more of the RSC’s works.  The rendering of a tragedy filled with death into a dynamic and exciting performance made it really stand out in my memory from other performances of classical tragedies that I have seen.  UK viewers can have high expectations for Paapa Essiedu’s presence on the stage and the big screen.