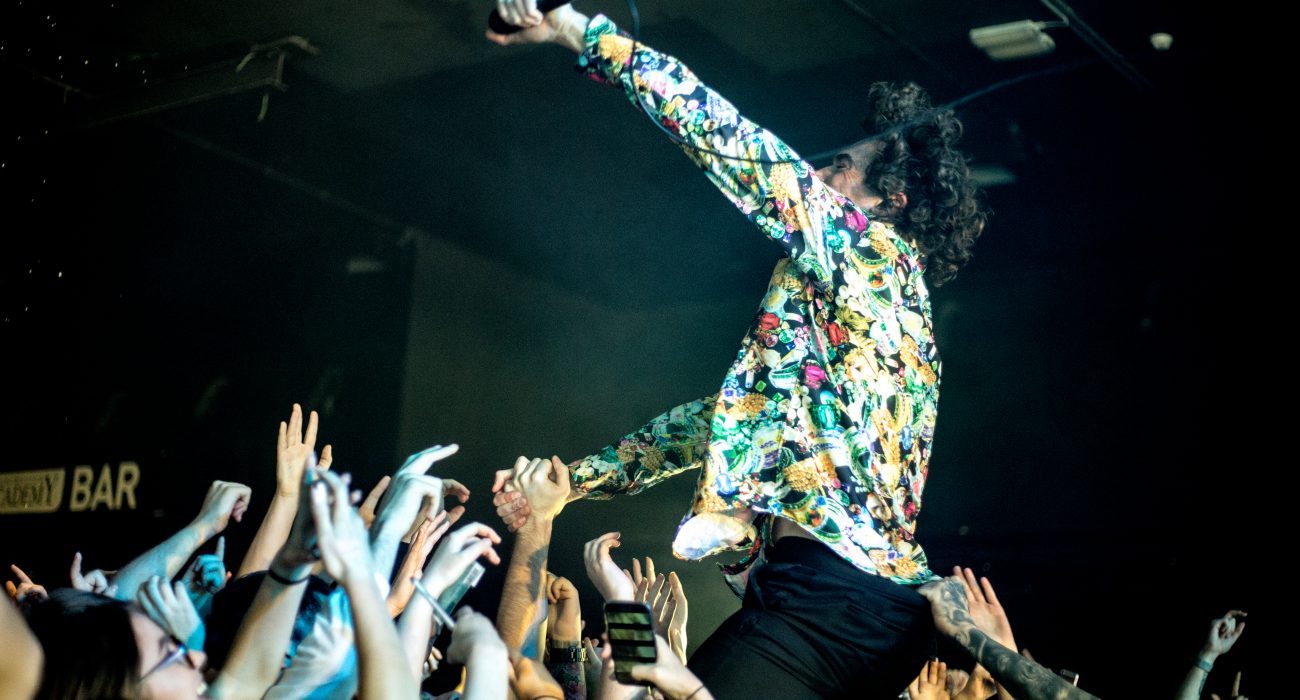 Don Broco are not a band to do anything by half measures and that’s certainly true for their performance at Manchester Academy on Friday the 16th February.

The group bounded onto the stage radiating everything that’s weird, wonderful, and most importantly fun — with a special mention to Si Delaneys’ pants, or lack thereof — but I found out much later that his incredibly short shorts allowed him to do some incredible dancing during the set.

Don Broco opened their set with tracks ‘Pretty’ and ‘Everybody’  from their new album Technology.

Despite there only being approximately 14 days between the album release and the Manchester performance, the dedication and admiration of Don Brocos’ fans was overwhelming. The fans give it their all and then some.

The was reception was reciprocated in the incredible energy given off by the band. Rob Damiani entirely submerged himself in the moment and kept the audience clinging on to his every word.

Every aspect of the night was mind-blowing. As the night went on, they played a selection from their diverse discography of previous years. Hits such as ‘Automatic’ and early days track ‘Priorities’. The set list was carefully crafted and flawlessly flowing from track to track, each song brimming with such energetic power and executed in a lavishly cool manner by all members.

Don Broco even debuted the track ‘Greatness’ from their new album. Damiani shouted that he thinks Manchester is just so great, and it feels right to play the track for the first time in this great city. He also mentioned how amazing Popolinos was as well.

The stand out track of the night for me had to be ‘Thug Workout’. One of their first songs, it only existed in YouTube form back before they were famous. The track encompasses sarcasm, fun, and being ‘cheeky’.

Not only this, Don Broco are known for when they play this song to get the audience involved as much as physically possible. Encouraging a pit and getting them all to do pushups through the intro and then generally just lose their shit in the pit.

“You know the drill” shouts frontman Rob, “If someone falls up you pick them straight back up”.

As the night draws to a close, Don Broco finish their official set list with ‘Money Power Fame’, before being screamed to come back for their encore.

Just as the night couldn’t get any better, Don Broco played ‘Come out to LA’, another impeccable track filled with humour and repetitive, catchy rhythms.  The performance concludes with ‘T-Shirt Song’, which is probably the ultimate finale song.

“They’re saying there’s one song left, no time for no regrets, I take my T-shirt off, swing it around my head”.

Light lyrics suddenly descend into booming head banging vibes, not only this it felt like the majority of the room, as told to do, took off their shirts and swung them around the room. Whilst it sounds probably a little bit gross — which it was — the way it looked, or must have looked from the front was a beautiful chaotic madness.

I knew when I heard the album that the tour and their performance would be mental, and they certainly didn’t disappoint.

Don Broco are just pure fun to watch and to listen to. They clearly enjoy and have fun with what they do and their fans certainly connect and love to be a part of that. This was the first gig in a long time that I left grinning from ear to ear, and I certainly cannot wait to see what’s in the pipeline for the future.