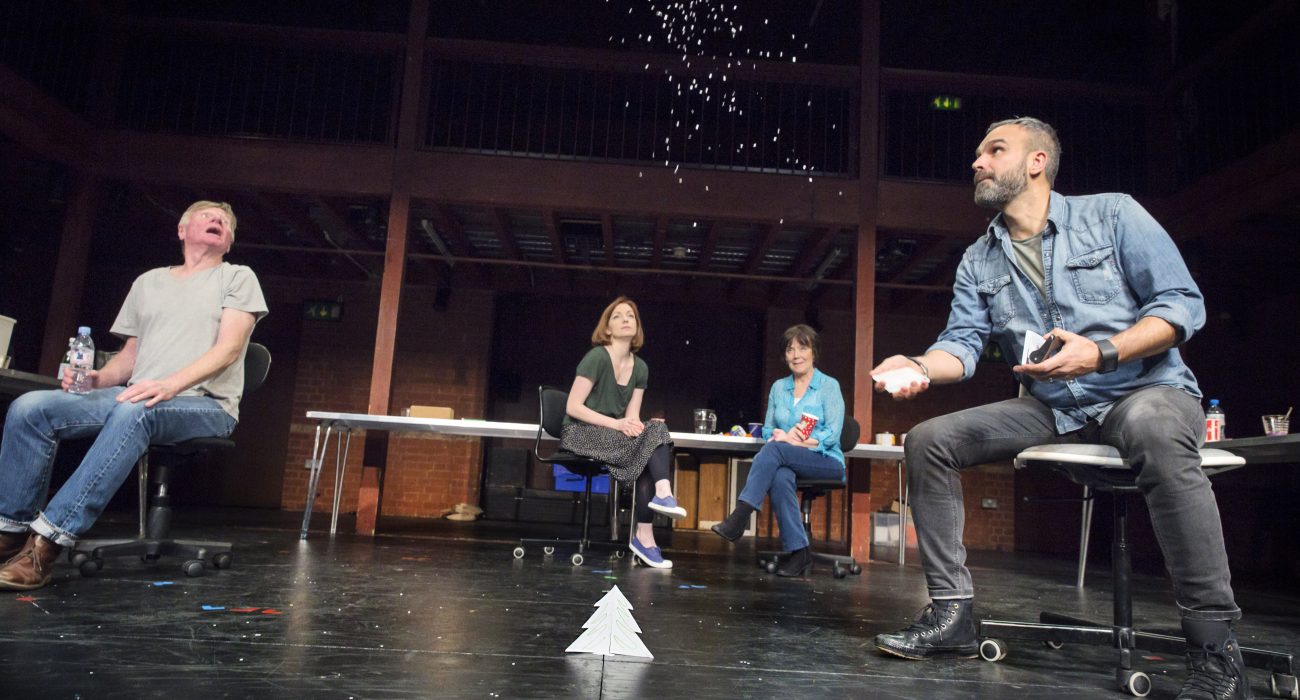 The Actors Touring Company, who are responsible for bringing David Tushingham’s translation of Roland Schimmelpfennig’s German play, Winter Solstice to Manchester, describe their ambition to create theatre which places “the actor at the heart of the work and employing a lean aesthetic which promotes environmental sustainability”.

This outlook is evident as soon as you enter the theatre. Instead of a stage the audience is confronted by school canteen tables arranged in a square, inside a rectangular area marked on this floor which demarcates the performance space.

At various moments in the play this space is the kitchen, living room, bathroom and bedrooms of the upper middle class family around whom the play is centred, sometimes it is two or more simultaneously. This effect is achieved through the actors describing the scenery and events  in an almost novelistic style; often one performer will explain an action or a sentence of dialogue immediately before it is delivered.

Some of the play’s key comedic moments come from the use of improvised props which have been described by the actors in one instance a pink highlighter becomes a pair of glasses. This is reinforced by the wilful manipulation of the visual by the spoken narrative. However, for all its novelistic aspects and formal trickery the performances remain emotionally relatable. The relationship between intellectual couple Betina and Albert is beautifully acted and their non-verbal responses both to one another and the other characters are a delight.

The narrative revolves around the Christmas Eve intrusion of Rudolph, a man from Paraguay, into the home of Albert and Betina. It is made abundantly clear to the audience that both the couple and their home are resoundingly bourgeois. Albert is a historian and Betina a director of worthy artistic films; the tasteful excess of their apartment is a motif throughout the play. The introduction into this flat of Betina’s mother, Corinna, only adds to the fraught family dynamic. Rudolph is a dark figure; returning from a post war exile in  South America he represents the recent return to Europe of far right ideologies which we thought had been left in the past. He is extremely charismatic. Konrad, a painter, makes up the final member of an incredibly strong ensemble cast.

It is Rudolph’s Freudian slip when regarding a painting of Konrad’s on the wall of the flat – he refers to ‘The Struggle’ as ‘My Struggle’ – that gives the audience its first insight into the political orientation of the interloper. The play in centrally concerned with the inability of bourgeois liberalism to confront the rising tide of extremism, as Albert, who during the play changes his opinion of Rudolph from one of suspicion to disgust, is unable to challenge him in any meaningful way. Instead we see him turn to medication and silence. Actions which shine a light on the silent complicity of the intellectual classes in the return of nationalist extremism to Europe. This is play which is both challenging and thought provoking and is definitely worth seeing.