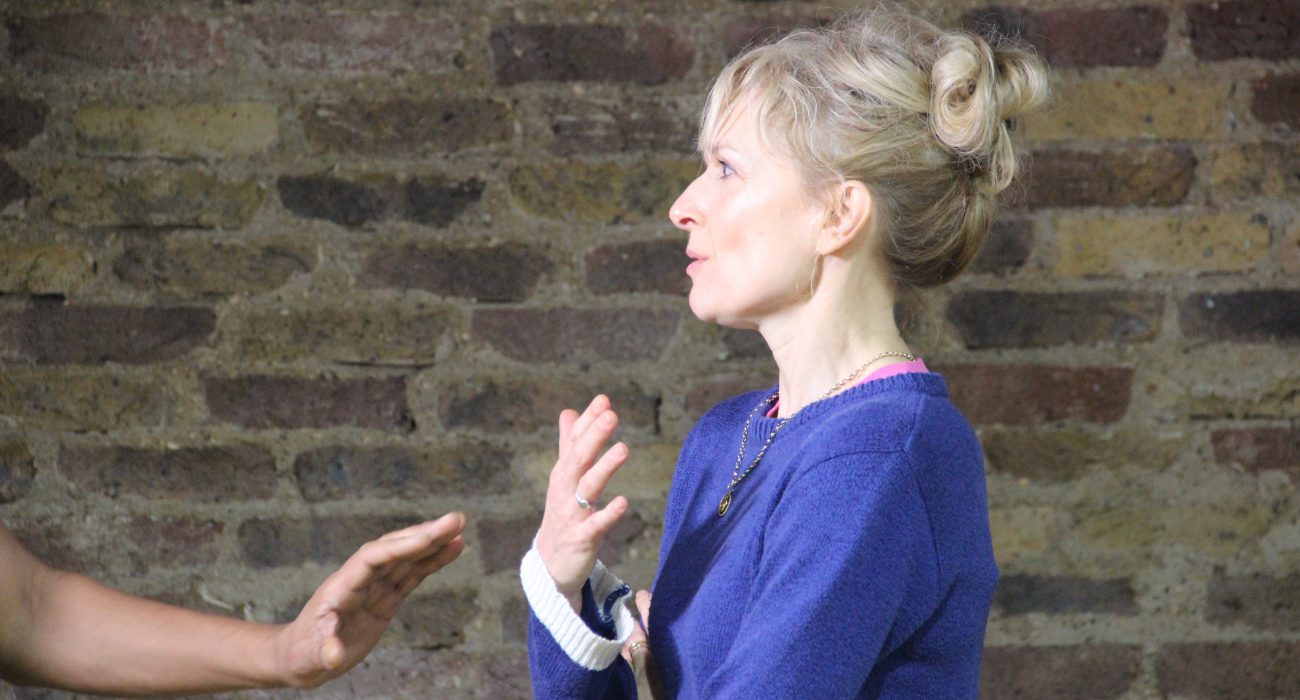 Amelia Bullmore: “In my day you could put on anything on a Monday night, anything”

Chelsea-born actress Amelia Bullmore has enjoyed a fantastic career to date. First starting out as a Coronation Street regular in 1990, Bullmore went on to star in a stellar run of dramas such as State of Play, Ashes to Ashes, Sherlock, Happy Valley, Twenty Twelve, and ITV’s exceptional police drama Scott & Bailey.

Along the way, she mastered the art of comic acting as well as scriptwriting. Something lesser known was that she was also a student here, at our very own University of Manchester.

Bullmore is back in Manchester to take on the role of Marty, the lead in Annie Baker’s award-winning play Circle Mirror Transformation. We met at HOME to discuss her latest role.

Circle Mirror Transformation is set in the fictional town of Shirley, Vermont where we follow the journey of five strangers as they meet in their local community centre for a creative drama class for adults.

Marty, Bullmore’s character, is responsible for the drama class. “She’s very active in this community centre where the play is set, in this fictional Vermont town of Shirley. So we think it’s a pretty small community and Vermont is quite an alternative [place] — people go for the lifestyle, to grow vegetables and a lot of people are in alternative medicine.

“Marty’s not from Vermont, she’s gone there for this way of life that she wants to live. She’s very positive, and she’s really into the class, and really wants everyone to be open to it and to connect to it.”

The Manchester premiere of Annie Baker’s show is directed by award-winning director Bijan Sheibani who was previously artistic director of ATC from 2010 to 2011, and associate director at the National Theatre from 2010 to 2015.

There is certainly some buzz surrounding the show. Upon its debut, Circle Mirror Transformation was declared one of the top 10 plays of 2009 by various publications such as the New York Times, Time Out and The New Yorker. Baker also won the Obie Award for Best New Play in 2010 for her “quiet masterpiece.”

But what makes the play so special? Bullmore believes it lies in the writing’s subtleties. “I think it has a very rare sensitivity. And that sensitivity applies to all of its ingredients, the comedy is very fine, the insight into doubt and loneliness is very sharp. She’s [Baker] incredibly skilled with what she holds back. And it’s an amazingly rich script to work on.”

Bullmore believes it has an almost musical quality. “There are lots of ums and ahs and pauses and silences.” Marty holds quite a prescriptive view about these, and how long they should last.

“She says in the prologue, ‘you’ll want to pick up the pace — you’ll get to a point in rehearsal where you think what this play needs right now is pick up the pace — don’t.’ She said, ‘if you go fast it’s a satire, but these people are no fools — please honour the pauses.’”

Bullmore agrees. “I think it’s deceptively great. On the page, you don’t realise quite how deft the writing is. And then when you do it, when you put it on its feet and push all the way through, you realise it has a sort of undertone of the great body of stuff and mess that’s under the surface. And I think that sets the great plays apart.”

“And especially if you don’t have many other sort of outlets, there’s nothing like it. I know that in education the finding is that if you give school kids drama, they become better at everything. Not just the arts, but everything. You know, if drama is on the curriculum, people get better at maths, people get better at science, because there’s just something about what you learn about confidence, self-expression, listening, collaborating, daring. It just enables everything.”

Our conversation turns towards her time at university. She speaks nostalgically of her favourite memories from her studies, a wide smile on her face. It’s clear that Manchester left many wonderful memories.

“Monday was always a big night because you’d go to the Stephen Joseph studio and watch whatever was put on. In my day you could put on anything on a Monday night, anything. One guy went onto to study at Lecoq; he constructed a haystack and he lay on top of the haystack with a bit of straw between his teeth in dappled light.

It was Manchester where she met award-winning playwright and screenwriter Helen Edmundson, “who was in the year above me, [and] set up a touring women’s theatre company called Red Stockings. Our first show was her dissertation, which was on women’s theatre.

“She had done all this work on what were the common factors of women’s theatre, particularly adject props — setting up something quickly, maybe in a street corner, comedy masks, song — to be very immediate and impactful.

“And to demonstrate that she wrote this show, and she got three of us to do it with her… This was part of her dissertation, so it was a big, big deal — and we’d been rehearsing in the drama department every evening — we finally did this show and it went down a storm.” Edmundson landed a first. “Everybody said, keep that, that show — that show needs to have another life.

“And in fact we then became this company and with Helen at the helm, we toured and co-wrote and performed all around the North West, we got our equity cards, we got funding, we got enterprise allowance, we did women’s weeks all over the place, we did arts centres, we did that for four years. It led to so many things.”

And for any aspiring actors, what’s the worst mistake you can make? “You’ve just got to do whatever it takes to not tighten up, and by tighten up I mean don’t get in a tight state about everything you want to happen.

“Don’t tighten up when you’re going into work — however daunting it is, just try to fight tightening up. Because it just won’t help you and you have to be as loose as you can so you can listen and be there and keep it alive. Don’t think it’s just you, it never is.”

She recounts how much the industry has changed since she left Manchester. “I think it’s so tough now and I think, obviously you need to earn some money, so get your hands on a job where you like the people — even if it’s a café where there are people who are also aspiring — you might meet people there. Just make your own work.

Make your own work and keep in touch with all your friends who were aiming for the same thing — if that’s reading plays, or writing plays, or workshopping things, or improvising, or going to Edinburgh if you can get that together — anything that keeps you busy and involved with it, and not horribly at the mercy of everyone else.”

Amelia doesn’t hesitate in stating that her latest work won’t be for everyone. “If you want bombs and bloodshed you will be really disappointed. But if you want to watch five people who don’t know you’re watching,” then this is for you.

You can see Circle Mirror Transformation at HOME from Friday the 2nd March to Saturday 17th March.