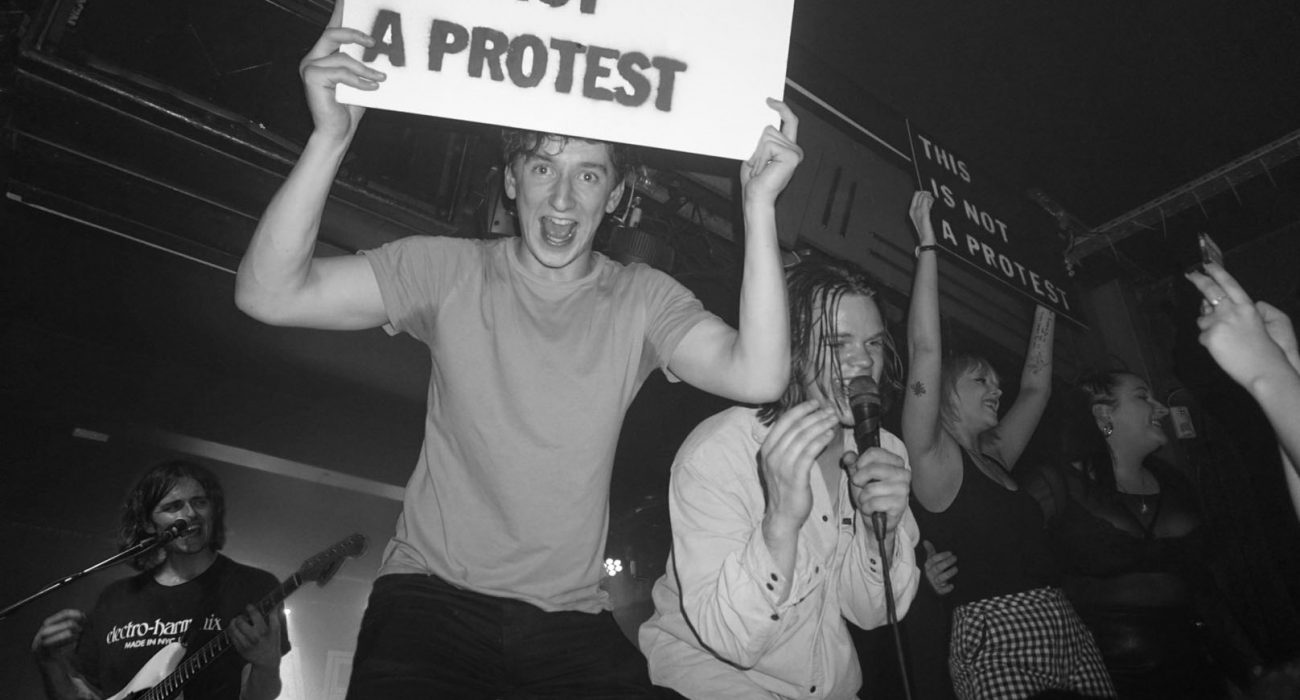 Heavy indie-rock outfit Sheafs took to the stage of Night and Day Café last Saturday with one intention and one intention only. To make you move. This Sheffield-born explosive 5-piece have perfectly executed a short yet certainly eruptive set list comprising of their dynamic, rowdy songs which are intrinsically woven with attitude and confidence.

Frontman Lawrence Feenstra commanded the stage with a strong, captivating swagger embellished by his ability to directly engage with his audience, making a fairly small space feel far larger.

All the while rip-roaring guitarists Chris Goodacre and Charles Mellor combine their artistry to concoct riffs that fully endorse the bold, self-reliant, and relentless lyricism that Lawrence so effortlessly exhibits.

Opening with the potent ‘Mind Pollution’, Sheafs instantly warped the crowd of Night and Day into a frenzied, turbulent atmosphere utterly at the will of Lawrence’s intense, impulsive motions.

However, what was equally impressive was the band’s collective ability to interact seamlessly with each other and the audience throughout the show. Not a single member of this forceful five-piece appeared to be phased by performing, instead, such striking confidence contributed to creating a very entertaining and admirable performance. One that gives every upcoming rock force a run for their money.

Having recently released their new volatile song — and my personal favourite — ‘Shock Machine’, the lads have cemented their image as one of the most exciting and spirited upcoming rock acts of 2018.

But they have also showcased their musical flexibility in their choice to tone it down, almost grounding their rebellious sound. Shock Machine possesses a short period of a seductive guitar and bass riff coupled with a reduced tempo decorated with echoing lyrics of ‘I wanna show you my shock machine, I wanna show you electricity…’ finishing with the bands clear ‘slogan’ of wanting to ‘make you move’.

Such change illustrates the versatility and control the band actually have, even over a sound that delves into the realms of post-punk.

To ensure Sheafs left Night and Day with a lasting impression, Lawrence joined his roaring fans in the pit, gripping at them, provoking a revolution as his 4 musical counterparts began the opening of the bands’ iconic song ‘This Is Not a Protest’. A revolution that fuelled a stronger fire in the bellies of those already moving, enticing those who weren’t already moving to join in, as he crawled on top of his supporters.

Such a bold and compelling performance leads me to believe Sheafs are not going to rest until they are known as a household name, or at least put up a serious fight to get there.