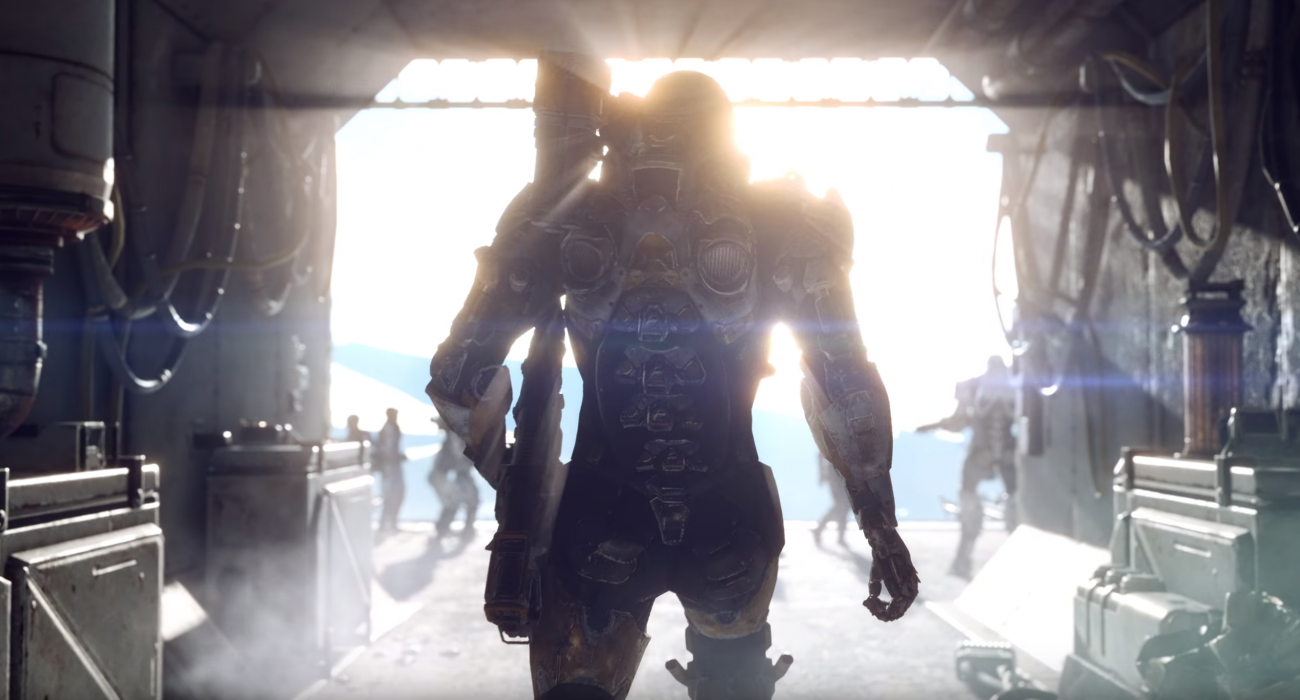 Not much, except EA want it to be huge, describing it as “the start of maybe a 10 year journey” for developers Bioware.

Looking at Anthem’s known features also goes some way to demonstrating what EA want from this game: everything. Anthem is an open-world, co-operative, MMO (or possibly ‘instanced shared world’) first and/or third-person shooter with RPG elements, also featuring a choice-based story emphasis, a weapon upgrade system and an in game economy. In other words, every major AAA gaming craze from the current console generation.

Of course, much of this echoes the story of Activision, Bungie and Destiny. Destiny, which was originally pitched as a shooter meets MMO, had similarly lofty ambitions along with a deal for multiple sequels and DLCs.

Destiny, however, faced a notoriously troubled development. Speaking to Jason Schreier, Jaime Griesemer, a senior developer at Bungie, spoke of the pressure the studio faced, saying “there was a looming feeling that Destiny had to be the greatest thing they’d ever done,” describing the game as an “impossible ideal.” Bungie also had the pressure of developing their first game since Halo, so audience expectations were high to say the least.

Of course, EA and Bioware are themselves under a lot of pressure external to the ambition of Anthem. The last game the two worked in tandem on, Mass Effect Andromeda, was arguably as tumultuous as Destiny, with five years of development culminating in a game that was received poorly and criticised heavily. Compounding this, EA have had an awful year in the headlines and, after debacles with Need for Speed and Star Wars: Battlefront II, are in the midst of an image crisis.

In Destiny’s development, this external and internal pressure became evident long before the game came out: there were a number of warning signs – senior figures (including Griesemer himself) were let go, Activision and Bungie had public disagreements on Twitter regarding Destiny’s E3 presentation, and, at one point, a poorly recevied leaked supercut was released, prompting a complete change of direction for the game.

Similarly troubling signs are already emerging from the otherwise clandestine development of Anthem. In July 2017, Bioware’s general manager, Aaren Flynn, stepped down, and in March of this year, Drew Karpyshyn, the studio’s most reknowned writer, also left the studio. Both had been working on Anthem.

Elsewhere, an ex-Bioware employee publically declared that Anthem will be “an example of EA’s monetization plans.”

The last of these early warning signs is perhaps symptomatic of a larger problem for Anthem and Bioware: the game is tied indelibly to three of EA’s overarching ambitions: the Frostbite Engine, their microtransaction policies, and their ‘games as a service’ model.

The Frostbite engine is the one most likely to cause internal conflict, and Bioware have previously criticised the tool. Again speaking to Jason Schreier, Bioware cinematic artist John Epler commented regarding Dragon Age: Inquisition that the Frostbite Engine “was absolutely the worst tools experience I’ve ever had.”

Later on, Kotaku reported that the Frostbite engine had also been extremely problematic in the development of Bioware’s Mass Effect: Andromeda, and that the EA DICE developed engine, whilst incredibly powerful and competent for some purposes, was equally unwieldy and ineffective in regards to other vital tasks.

On the level of consumption, I have to admit I’ve never been smitten with the Frostbite engine. Out of all the engines, it is no doubt the one that is capable of producing the most beautiful scenery and the meatiest environments, but – perhaps appropriately, given its name – it has always felt a little stiffer and less responsive than the likes of the Unreal engine and the Creation engine.

As I hinted at earlier, the Frostbite engine isn’t the only EA entity shackled to Bioware and Anthem – we’re also likely to see a fully integrated microtransaction/lootbox system.

If, as EA’s Patrick Soderlund suggested, Anthem started development four years before its E3 demo, then it would have been commissioned in 2013 – the year current CEO Andrew Wilson took over. Even if it had begun prior to Wilson’s promotion, it is likely that Wilson would have arrived early enough to mould the game while it was still in pre-development.

Given that the Wilson 2013-present era was the start of an age in which the likes of FIFA’s Ultimate Team kickstarted a phase of really quite aggressive monetisation, it is likely that anything commissioned under Wilson at that time would follow that EA philosophy, which involves not just optional extras, but sewing microtransactions (often quite ingeniously, I must admit) into the core mechanics of the game – a period in which they twice won The Consumerist’s ‘Worst Company in America’ award. 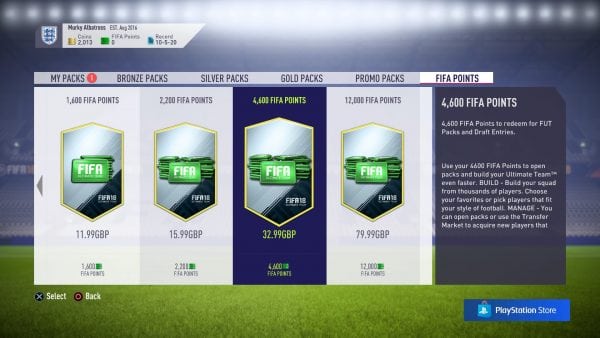 If Anthem has indeed been constructed, at least to some extent, around this, then it is overwhelmingly likely we’ll see it in the finished product. Given that we are now, time-wise, 60-80% of the way through Anthem’s development cycle and that the E3 demo occured before EA’s controversies with their monetisation systems, it seems inevitable that the game will be the apex EA’s of creeping plan to normalise in-game purchases for already premium price games, as the aforementioned ex-Bioware employee suggests.

Granted, EA’s tough year with public backlash might curb the way pricing is scaled in Anthem, but given the period in which Anthem was conceived, it seems likely that monetization will be too deeply entrenched in the core mechanics of the game to eradicate the erosive effect that microtransactions, loot boxes and pay-to-win mechanics have on the game’s core. Moreover, the fact that EA have now reintegrated microtransactions back in Star Wars: Battlefront II (albeit as cosmetics only) indicates that they are not yet done with the model, even if they have learned a thing or two about restraining it.

One last, but no less significant, factor that may be rolled out in full force is EA’s long term ‘games as a service’ (a.k.a. live service) ambition. Live services would seek to replace the annual installments seen in EA’s sports franchises with a subscription fee and continuous updates. This is something EA are already considering with the likes of FIFA and Madden, and the company may see Anthem as the ideal way to integrate it.

This would make the “10 year journey” statement make far more sense: EA are essentially chasing their own GTA V and desperately want a game that retains a significant player base over time.

The thing with games that are currently thriving with a live service model – the likes of Fortnite, GTA V and Overwatch – is that the player base isn’t sustained simply by the live service itself, but by the undeniable popularity of the titles themselves.

Yes, unsurprisingly, quality is a necessary prerequisite of such a model, and Anthem will have to be no different. Unlike EA’s recent titles like Mass Effect and Star Wars, a live service game has to create a sustained demand in the first place, and, especially for an original IP like Anthem, hooking this player base will be dependent on game quality rather than a promise of future improvement – we saw how that worked out for the likes of No Man’s Sky.

Should Anthem be a live service (as Blake Jorgenson has suggested) then it is not just sales profit that would be damaged by Anthem a poor launch. Indeed, the immediate realities of commerical and critical underperformance would be compounded as it would translate into a huge loss of future earnings.

Anthem’s eventual quality is now so tied the the fate of so many of EA’s endangered long term ambitions – the Frostbite engine, the live service, corporate monetisation policies, their reputation as AAA bastions – that the pressure on Bioware is fast becoming suffocating, and this is starting to show as those Destiny-like warning signs start to creep out of the woodwork.

Bioware, who will doubtless be aware of EA’s history of shutting down even the most illustrious underperforming studios like Visceral, Origin and Black Box, know better than anyone that, at this point, Anthem needs to succeed to prevent a veritable games industry red wedding.