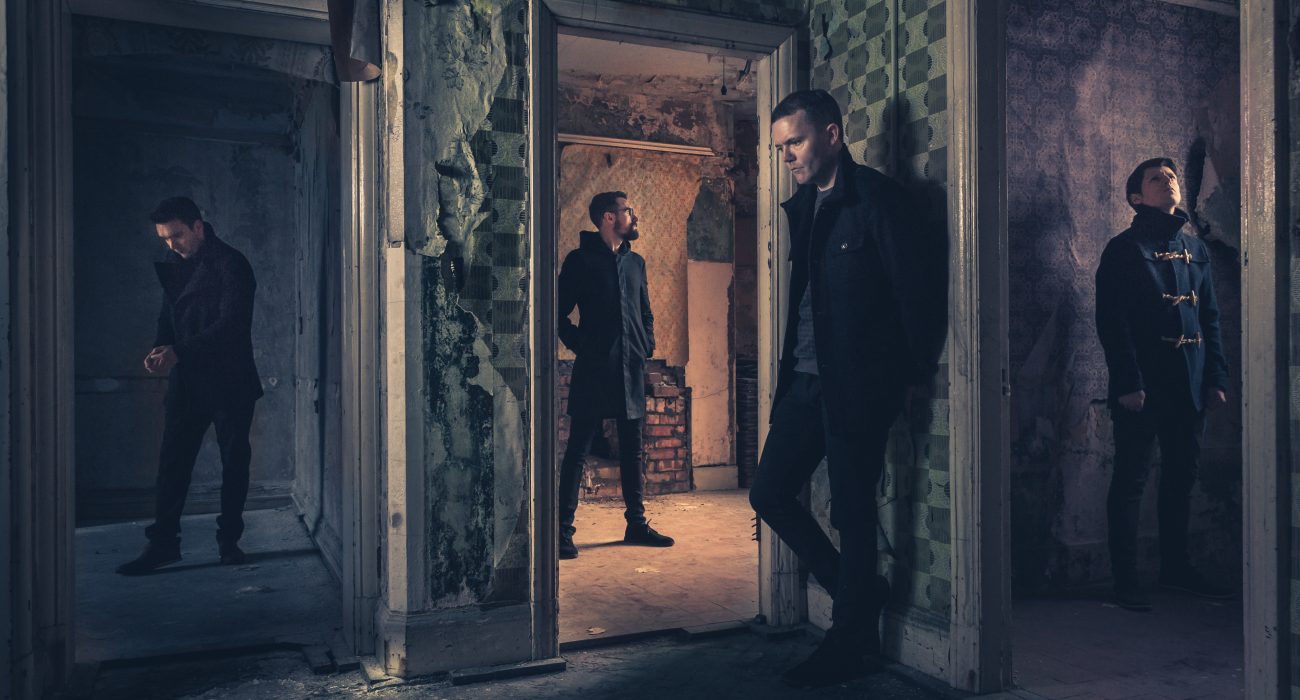 Manchester indie-electro four piece The Slow Readers Club have released their new single ‘You Opened Up My Heart’, taken from their upcoming album Build A Tower, to be released on 4th May via Modern Sky. Throughout April and May, the band will be completing a UK headline tour in support of Build A Tower, with their hometown Manchester date selling out in under 24 hours.

How did this album differ to writing the previous two?

Well it was written in a more condensed time period. It’s been a successful two years for us, so there was an urgency to getting something out quickly. Obviously we were signed at the end of last year, so that added a bit of pressure to releasing.

Do you think the pressure helped?

Definitely helped, yeah. We took our time on the first two, but this one was us up in Manchester just jamming together.

What about the new single — ‘You Opened Up My Heart’ — was it an easy one to write?

Yeah it’s gone in a bit of a different direction for us, that song. But it’s had a good response so far.

Are you excited to get the album out there then?

Yes, definitely. It’s funny actually ’cause when we go out on tour the album won’t be out yet, and it gets released on the same day as the Manchester show. So there’ll be some shows beforehand where people have never heard the tracks, so that’ll be interesting to see how that goes down. We’re going to get a different reception as the tour moves along.

How does it feel getting back out on tour?

Great, yeah. There was a pre-order which sold out 1000 tickets in ten minutes or something. It’s amazing we’ve been able to play bigger and bigger venues over the past few years, you know. We used to play to like 30 people, and then we played the Ritz last year, and this time Albert Hall which has got a 500+ bigger capacity.

Is Manchester your favourite place to play, being your hometown?

Yeah, Manchester’s always amazing. Dublin’s always been good to us, and we played King Tut’s Wah Wah Hut in Glasgow — that was amazing to play at such an iconic venue. But people come from far and wide to see us play in Manchester, and Albert Hall will be a great venue.

Is playing festivals different for you guys to playing your own gigs?

Yeah, our first one is Liverpool Sound City in a few weeks. I think we’re headlining one of the stages there, and we’re playing the main stage at Kendal Calling this year. We like playing festivals — it’s new shores playing to crowds who might not know who you are, and you’ve got to try to win them over.

Are there any bands you want to catch on the festival circuit this summer?

I’d love to catch Everything Everything, and Idles — I’ve heard a lot about them. There’s some smaller bands as well we’re into.

Who would you say are your top three musical influences?

The Killers would be up there. Echo and the Bunnymen — for that 80s gothy sound. LCD Soundsystem, Arcade Fire, David Bowie. Obviously The Smiths and The Stone Roses were massive for us growing up, being from Manchester. You can’t escape all the Mancunian legends when you’re from Manchester.

Finally, if you could give a piece of advice to new bands starting out, what would it be?

I’d say… be organised with your release schedule. Get involved with good promoters and be tactical with the release strategy. If you release a single, have your next two ready to go in case things blow up, so you don’t miss the opportunity.

Thanks for chatting to us Aaron, and good luck for the tour!

You can catch Slow Readers Club on the following dates: