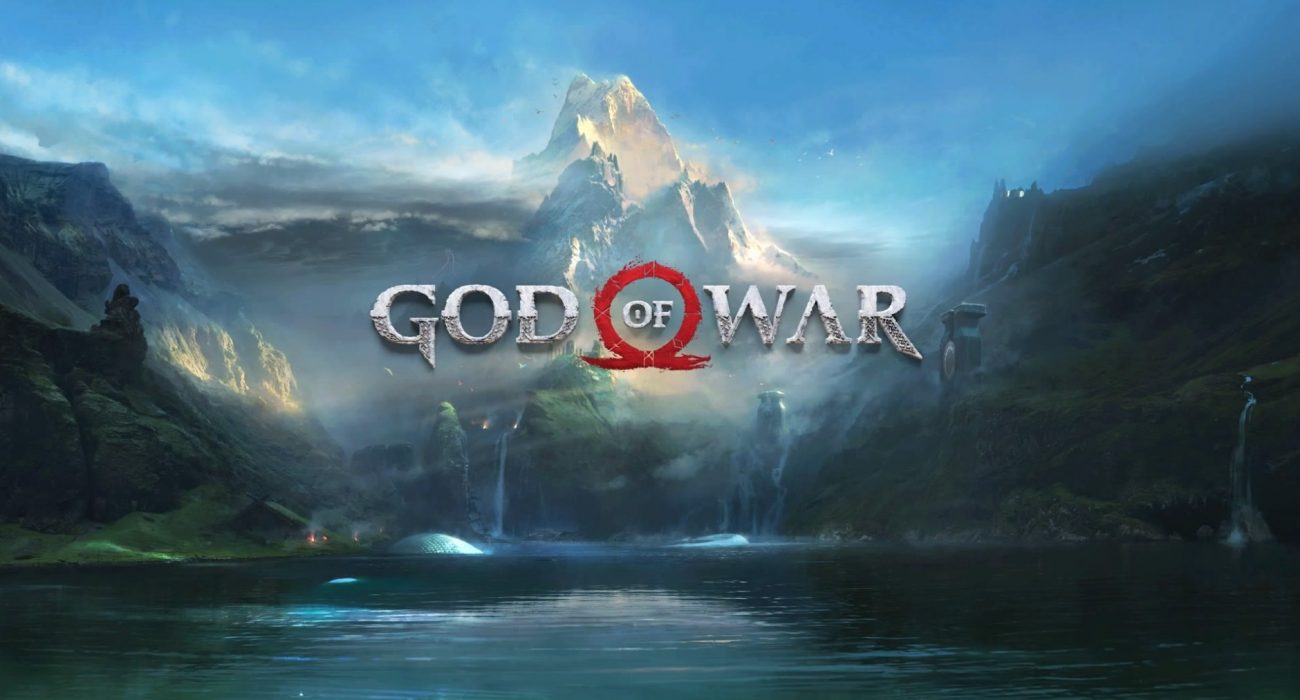 This year has seen a number of important reboots for long-standing but ailing franchises: Activision’s Call of Duty, Ubisoft’s Far Cry and Assassin’s Creed. The world of games journalism has generally received these rejuvenations in uniform, lauding such titles with high review scores but damning by faint praise in terms of feedback.

April 2018 saw another long-standing franchise return: God of War. This time, however, the industry has responded with nothing but the highest praise and, having spent almost a week with the game, I have to admit that the hype is fully justified.

For long-standing God of War fans, the departure of the latest instalment from its predecessors is dramatic. Sony Santa Monica have made wholesale changes, refocusing the franchise to exist as part of the Nordic mythological canon, adapting the camera to a more on-trend over the shoulder position, and revamping Kratos’ biographical premise to install the mortal vulnerabilities of parenthood. Early in the game, Atreus, Kratos’ son, asks, in a innocent but no doubt metanarrative way, what the implications of the events unfurled in the prologue are, to which Kratos replies, “everything is different, boy. Try not to dwell on it.”

And things are different. Where Kratos was once a figure at war in a mythological ideology that his level of violence was generally in keeping with, he now finds himself at the distinctly human end of a story in which violence becomes a means of catharsis. Indeed, much of God of War, for all its bloodshed, is essentially about expunging ugliness from beauty. Whether this involves ridding the Elven realm of Alfheim from the tumor-like growths that block your path, clearing the black breath that hangs over The Mountain, or simply destroying the many sinewy weeds that permeate the game, you soon come to realise that Kratos’ catharsis is about more than clearing the way for progress on the surface, but an inward journey of spiritual redemption.

Much of the narrative focuses on Kratos’ relationship with his son following the death of his wife. As the story progresses, Kratos’ own brand of gruff, tough-loving fatherhood is constantly challenged by the respective needs of the still grieving pair and Kratos’ own inability to express emotion outside of the physical. As time goes on, a genuine and really quite heart-warming tenderness grows inside Kratos, but the writers do an excellent job of spreading this out across the full course of the game and plausibly pacing his personal development in accordance with the rest of the game. 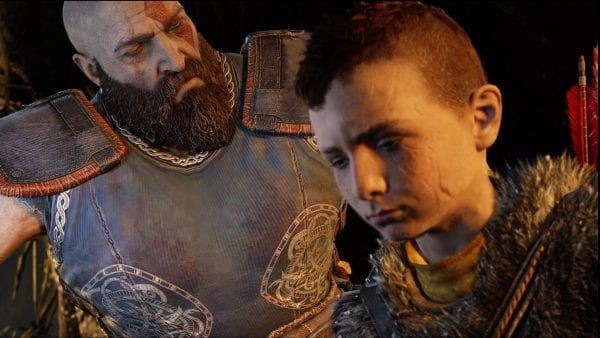 Not that Kratos has exactly gone soft. Indeed, many of the more complex and emotional scenes are supplemented by characteristically brutal and high-octane action. Whilst the narrative demands a certain level of emotion from Kratos, rage, revenge and brutality are still very much a tool in Kratos’ arsenal which he, and developers Sony Santa Monica, use to full effect.

The combat system, at the most rudimentary level, maintains much of its hack-and-slash heritage, although varying layers of complexity and variety are built on top of this as you progress, adding magical ‘runic’ attacks, increasingly intricate combos and changing enemy tactics. Whilst attacking enemies with your primary weapon remains enduringly effective, this array of offensive options allows you to optimize your approach on a per-fight basis, and means that even the more formulaic boss fights remain enthralling.

The combat is also excellently supplemented by the way fighting sounds and feels. Every sound effect that emanates from a fight-scene is deep and powerful, working with tactile feedback on the controller to produce a meaty, emphatic experience which underlines Kratos’ physical prowess.

This mechanical and audible variety is mirrored by the aesthetic variety found in God of War’s visually outstanding world. From the monochromatic frozen Dantean hellscapes of Helheim to the colourful dappling of the forest to the giant corpse of mythological giant Thalmur, God Of War’s universe is a joy to behold. The world is huge for a game whose central narrative is essentially linear, and not always easy or intuitive to traverse, but this superlative blend of art design and intertwining with mythological detail means that every new location is as fascinating as the last. 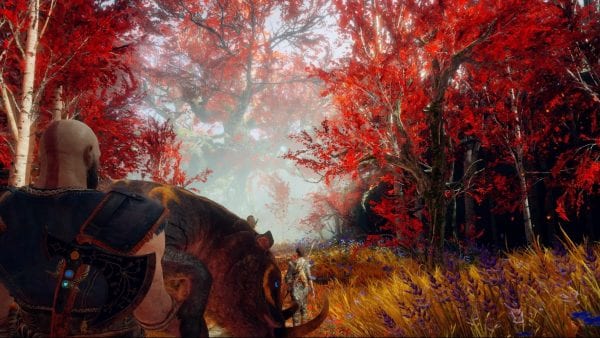 Attention to mythological detail is a lot of what this game tick. Whilst the more personal story revolving around Kratos and his son is arguably the central thread, it is embellished and augmented by being set against a field of mythology that the developers skillfully weave in. For those unfamiliar with Nordic mythology (most of us), such tales are conveyed clearly but faithfully, and we are provided with a codex to read for some background. Cleverly, this codex is written in Atreus’ hand to maintain accessibility for the game’s broad audience.

The pacing of God of War is also masterful. Every time even an ounce of tedium started to creep in to any facet of the game – be it storytelling, combat or environmental puzzles – the development team had something up their sleeves to immediately enthrall.

On top of all of this, the game manages to maintain a sense of humour. Whilst the story is largely a serious affair, Sony Santa Monica employ Christopher Judge as an amusingly deadpan Kratos whose no-nonsense brutality and morbid gruffness is often deployed as an amusing foil to a cast of more quirky side characters who seem intent on annoying him at every turn.

My criticisms of the game are fairly minor. I occasionally felt that Atreus’ dual role of son to be protected and useful assistant in combat was contradictory. Generally, this was addressed as a nuanced aspect of the Kratos’ parenting, but I felt – particularly at the start of the game – that Atreus was too often put willingly in harm’s way to be consistent with Kratos’ protective nature throughout the main story.

The over-the-shoulder camera could also be a little troublesome. The intention, in many parts (particularly puzzles), was, I imagine, to guide the player, but it did sometimes make navigating indoor areas difficult and meant I was often battling with the right stick when I had a much more dangerous troll/ogre/God to worry about. Puzzles were also a little bit one-note, and sometimes felt like a conventional formality when compared with the rest of the game’s outstanding ambition and execution, although a couple of times the writing did fall just the wrong side of that tenuous line between heartfelt and hammy.

There aren’t too many superlatives that haven’t been used to describe God of War already, but it truly is a masterpiece. The story is both astoundingly, inspiringly epic and large-scale whilst deeply human and personal, managing to satisfy its own artistic ambitions as a personal tale whilst standing on the shoulders of the giants that act as its source material. The gameplay is varied and challenging, building on the base, visceral brutality of its franchise forebears to produce an experience with real depth, and  this depth is apparent everywhere in the game, from lore, to sound and visual design to a plethora of engaging side quests.

Perhaps the highest praise I can give God of War is that it lives up to its name. In the battle that has raged between Sony and Microsoft for more than a decade, Kratos has delivered the final blow. The war for console supremacy may have just been ended.