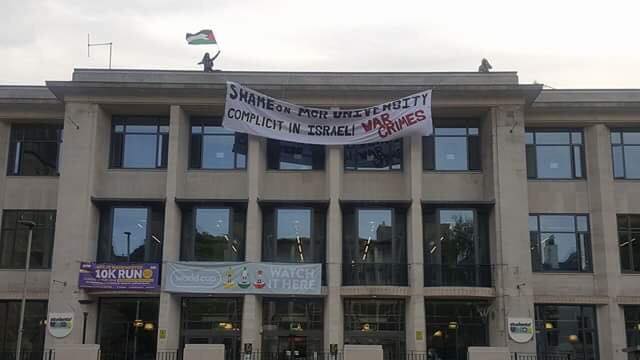 Manchester Palestine Action and BDS Manchester have protested the Isreali-Palestinian war by dropping a banner from the roof of the Students’ Union.

Pictures show Campaigns Officer Deej Malik-Johnson attending the protest, but it’s not yet clear whether he was part of the group that scaled the SU building to place the banner.

Speculation has circled that the group climbed the scaffolding at the back of the building — which is currently undergoing renovation.

The banner drop was the crescendo of a protest that started off as a vigil on St. Peter’s Square. The Mancunion understands that the banner was placed on the roof by the BDS campaign, but its leader Huda Ammori would not disclose the identity of the specific student in question.

Campaigns Officer Deej Malik-Johnson told The Mancunion that the “really quite moving” vigil and march was well attended, with even celebrities such as Ken Loach, the filmmaker, showing solidarity with the student organisers.

Deej continued: “Of course, it [also] coincided with the 70th anniversary of the Nakba… and then there was also, because synchronisity [sic] is like this, it was the day the US opened their embassy in Jerusalem.”

Nakba literally means ‘disaster’ or ‘catastrophe’ in Arabic, and is the word used to mark the day there was a mass exodus of Palestinian people at the behest of the Isreali government. The US embassy opening was met with mass protest and sparked a massacre in Gaza, which is what the protest was mostly commemorating, through many means such as reading the names of the 58 people that died in the clash.

Deej went on to say, in regards to the banner drop, that it “was not organised or supported by the students’ union.” However, he said that, if not thinking in his official capacity as an exec member, “as a student activist, it is something that we do.”

Huda Ammori told The Mancunion that overall “it was a hugely successful protest; there was a sit in on Oxford road and loads of students were engaging, listening and were emotionally affected by what they were hearing.”