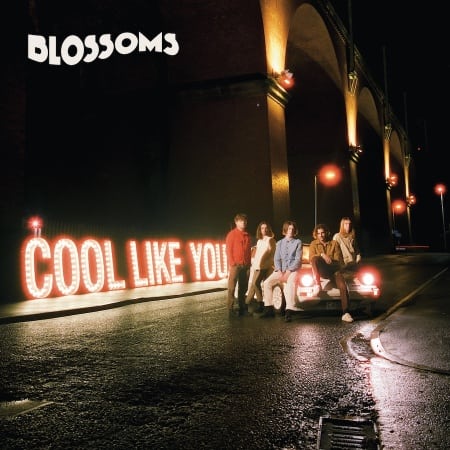 Fresh from the sweet success of second album Cool Like You, Blossoms strutted out onto the O2 Apollo stage, brimming with a new-found swagger and a redesigned brand identity, ready to do some serious uplifting. “‘Ello Manchester, we are Blossoms from Stockport”, introduced Tom Ogden, as if we didn’t already know.

Clad in a kind of Ghostbusters boiler suit and rocking some mega-cool curtains, Ogden’s confidence had come a long way since the early days promoting their debut record. There was a smugness to the originality of their most recent tracks and their synthy 80s groove which dominated the show.

It was very ABBA, and the lights were reminiscent of some 70s discotheque, primary coloured and smokey. Cool Like You track ‘There’s A Reason Why’ opened the affair, kicking us off without delay into what was to be a seamless set of feel-good tunes. They managed to create a distinctively Stranger Things atmosphere, as they rocked the flares and synth combo like they’d been in the business for decades.

Certainly, Cool Like You is more uplifting than that first record. Tracks ‘Unfaithful’ and ‘Cool Like You’ reached levels of infectious energy previously untouched by the band. Album closer ‘Love Talk’ was a particular highlight, inciting a ripple of heartbreaks as Ogden launched into “You’re just a flight away…”.

Old classics were as well received as ever, sonically revived slightly to fit the tone of their 80s direction. ‘My Favourite Room’ was once again Ogden’s limelight moment, as he crooned the recognisable, if slightly overdone now, “Because you’re gorgeous…” followed by a touching rendition of Oasis’ ‘Half The World Away’. Maybe the band need to give up the ‘Last Christmas’ cover though…

‘At Most A Kiss’ and ‘Getaway’ provided the perfect encore tracks, reminding the fans that though the band may enjoy a Grease cover every now and then, they are still the boys we know and love. The obvious closing track ‘Charlemagne’ (will they ever shake it?) induced the expected mosh pits and chanting, as Ogden chose Dua Lipa’s ‘New Rules’ for his classic ad-lib.

Blossoms have done themselves a favour with this second album. We were satisfied with their status as quirky indie band from Stockport, but now we’re faced with ABBA.2, and isn’t it wonderful?