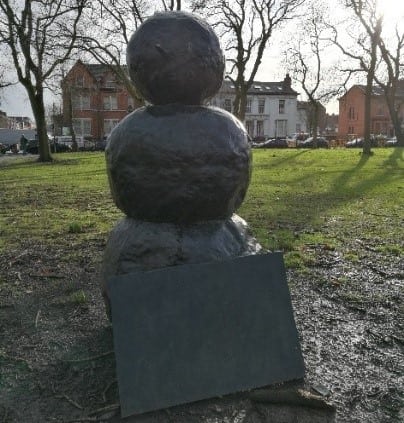 Artefact of the Week: ‘Snowman’ by Nate Lowman

In an era as controversial as the one we are now living in, the everlasting battle between morality and profit has reached a turning point. A resounding example? Climate change.

Now more than ever, we are asked to make the best choice between ethics and productivity, between selfishness and the hope for a sustainable future. Each of us, no exception, can make a difference and change the way we face this global challenge.

But how do we make people realise the huge impact they have on the environment and on future generations? What are the communication strategies that speak to people making their way into our chaotic routines and modern life habits?

The answer to these questions can be found in public art, with a significant number of recent artworks and exhibitions used to achieve such purpose, exploring different visual formulae to create a debate among their viewers.

Placed in a public urban space, Whitworth Park, ‘Snowman’ (2014) by the American artist Nate Lowman is a compelling example of how art can help us bring attention to climate change and its hypothetical consequences.

Be it for its cartoonish nature, visual appeal or strangeness, ‘Snowman’ attracts a wide range of viewers walking around the park. Displaying an immediately recognisable subject matter, the sculpture strikes us for its peculiarity: it is and it is not the snowman of our imagination.

It meets our expectation for its visual features but at the same time displays them in a completely different way. The sculpture has been crafted using bronze which seems a surprising choice when aiming to evoke the texture of snow.

Not only is the material an expected choice, it is also a problematic one as the sculpture comes with a peculiar – and relatively sad – metallic inscription stating: “I will be dead soon”. But how can a metallic snowman be about to disappear?

In front of the viewer is a strong juxtaposition, an inexplicable paradox between the long-lasting quality of the material and a sense of immediacy evoked by the inscription.

This contrast denies the sculpture apparent naivety and what at first glance seemed a mere representation of a funny cartoonish character appears to have a much greater significance behind it. Lowman is not simply aiming at redefining the material both visually and conceptually. He is recognizing a broader function to his piece, deliberately placed in a public space.

The apparently obscure inscription, associated with the character of the snowman, represents Lowman’s attempt to raise awareness on climate change and global warming, two of the major social issues of our era. The inscription stands as a warning and shows the necessity of a change in direction: if the world decides not to address such challenge that is everything that will be left, a metallic snowman.

As viewers, we are impressed by the artist’s simple and yet extremely effective strategy. Choosing an accessible subject matter, he has found a formula that speaks to the public giving the viewer the opportunity to build a relationship between personal history, memory and a future they will be responsible for.

Lowman’s case confirms the importance for the public to establish a connection both visual and personal with the issue at stake, leading the audience to realise both the responsibility and power that being a citizen of the 21st century entails.