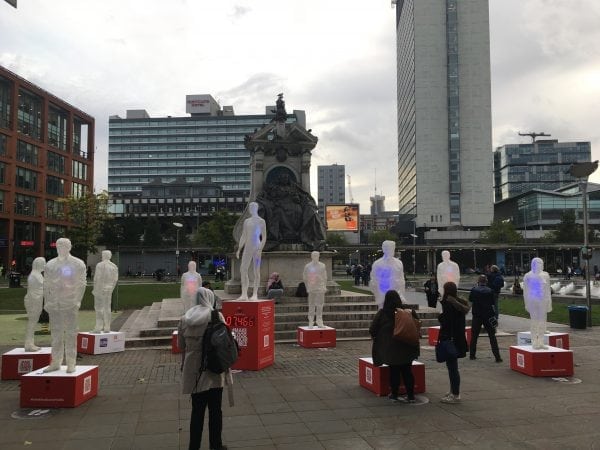 New translucent statues now stand together beside the Queen Victoria monument and have been positioned in a way that makes it impossible for them to be missed by the area’s thousands of daily passers-by.

Their placement is part of the Make Blood Cancel Visible campaign which is being supported by a number of cancer research charities including Bloodwise and Leukaemia Care, and sponsored by international pharmaceutical company Janssen EMEA. Its aim is to give blood cancers the recognition they need for collectively being the third biggest cause of cancer-related death in the United Kingdom as well as to increase awareness among the general public of this usually unseen killer. The campaign also calls for patients, families and medical staff affected by blood cancer to share their stories throughout September (Blood Cancer Awareness Month).

Each figurine is motion-activated and will play a recording of its likeness speaking about their experience with the illness in their own words upon someone approaching it. Organisers hope that in creating this intimate, interactive experience visitors will remember these stories and support the campaign.

The frontmost figurine, representing Bloodwise ambassador Brett Grist, recounts Grist’s diagnosis of acute myeloid leukaemia and his following treatment. Grist, 45, was first diagnosed in 2014. After finishing three cycles of treatment ending in August 2015, Grist’s cancer relapsed. He received a stem cell transplant that October and has since returned to work.

Olympic gold medallist Dame Kelly Holmes is also an ambassador for the campaign, having recently lost her mother to myeloma. Holmes has voiced how neither she nor her family knew very much about the illness and has expressed her belief that it is vitally important for people to be aware of blood cancer and its symptoms to increase the chance of early detection.

Bloodwise’s CEO Gemma Peters has said that “awareness of diseases like leukaemia, lymphoma and myeloma and their symptoms is startlingly low” and that the campaign “is helping to shed a light on these cancers and the problems that patients face.”

The installation will be in Piccadilly Gardens until 22nd September before moving to its final destination of Edinburgh.