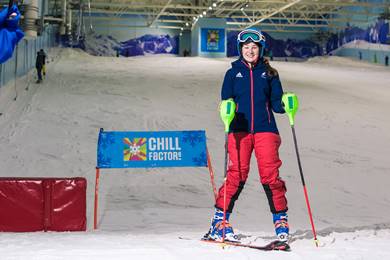 Menna Fitzpatrick: In Her Own Words

Entirely blind except for 3% vision in her right eye, Menna Fitzpatrick hit headlines across the world this February when she won four medals, and Britain’s only Gold, at the Winter Paralympics in Pyeongchang. The 20-year old Mancunian now has her eyes firmly set on becoming a world champion in January.

Before jetting off for training in Germany, Fitzpatrick is currently leading Ski Confidence camps, aimed at raising the profile of snow sports across the country, which she sees as crucial, ”Winter Sports is an amazing sport to be a part of, and it’s so sociable. There are so many universities and schools at the moment that have snow sports teams. The schools that I went to didn’t do those sorts of things. I think it’s a recent thing in the last few years (and) we’re starting to get there in terms of opportunities.”

She is teaching beginners at Chill Factore, a trip down memory lane for the gold medallist, who recalls first being discovered on the same slopes, ”Yes that’s right! It was about 7 years ago now that I was spotted here. It’s been a dream of mine for a long time to go to the Paralympics –  my aim was always to go to Pyeongchang 2018. I didn’t realise that it could actually become possible until I reached the World Cup circuit in Aspen, Colorado two and a half years ago.”

That meteoric rise has seen her become Britain’s most decorated Winter Paralympian after just one games, and Fitzpatrick recognises the challenge of equating the Winter showpiece’s reputation with the Summer games, ”It’s slowly getting better, as the level of interest in Paralympic sport grows, so will the competition. The standard of the sport is also changing — even from Sochi four years ago — athletes are having to work harder to keep at the top which is really exciting.”

This well-needed awareness has been boosted by her story, with many encapsulated by her ability to ski to such a high standard, with the little vision she has. Working closely with guide Jen Kenhoe, she explained how the two collaborate on the slope, ”We have two-way Bluetooth headsets on our helmets so that we can communicate. Jen will go down ahead of me wearing a bright orange jacket that contrasts with the snow, which helps me with the visibility. With the vision I do have I can make out Jen’s exaggerated movements — that gives me an indication of when she’s about to take a turn, for example, and then I have to do the same, 2 seconds or even a millisecond later. It may sound like we’re shouting at each other, but we’re just trying to get the message across!”.

The pair are very close, with Fitzpatrick has even described Kenhoe as a ‘sister’. She elaborated to explain how such a connection off-slope aided their success when competing, ”We have a really good relationship. One of our strengths is that we get on so well — everything is very natural and because of that we don’t have to work on the teamwork and communication side of things. It’ll be the little things Jen does, like pointing out a step, that reinforces the trust between us. That is really important when it comes to the skiing.”

This close teamwork and the achievements that she now has under the belt make Fitzpatrick one of the most experienced athlete’s in her field, but she admits that you can never quite shake the anxiety of performing and outlined how she deals with nerves, ”I still have nerves every time I get into that start gate. We chat to a sports psychologist and she gives us strategies to help us manage. There are essentially three strategies that I used for the Paralympic games. The first is to focus on the butterflies in your stomach and imagine that you are trying to get them into a formation, the second is to try and think calmly under pressure at all times. Finally, there’s Yogic breathing. Don’t try all these at once, they won’t work! Although, when I tried I did end up picturing butterflies doing yoga…”

As the 20-year old talked through her coping mechanisms, carefully-crafted relationship with her guide and her long-term commitment to the sport, a picture of a dedicated, enthusiastic Paralympian, already at the top of her field emerged. Having been recognised with MBE in the Queen’s Birthday Honours list this year, her remarkable success has put skiing at the top of her priorities list, and she discussed how once-hobby has now blended into a full-time job, ”I do explain that my profession is a full-time athlete. The saying is true though, if you find something that you love, it doesn’t feel like work. That is the case for me most days. When you have those days that it’s raining, windy, and there’s a 4am wake up, you do lose your motivation a little bit and then it feels a bit more like a job again. We work so hard though, we get a lot out of training by the end of it.”

She certainly harbours an intense training schedule and will be abroad for almost all of November and December, preparing for the world championships. Despite this, Fitzpatrick already has her eyes firmly set on the future.

‘’There’s Beijing 2022 to look forward to’’. ‘’My plan is to just keep going, keep training, and use every moment to get better.’’