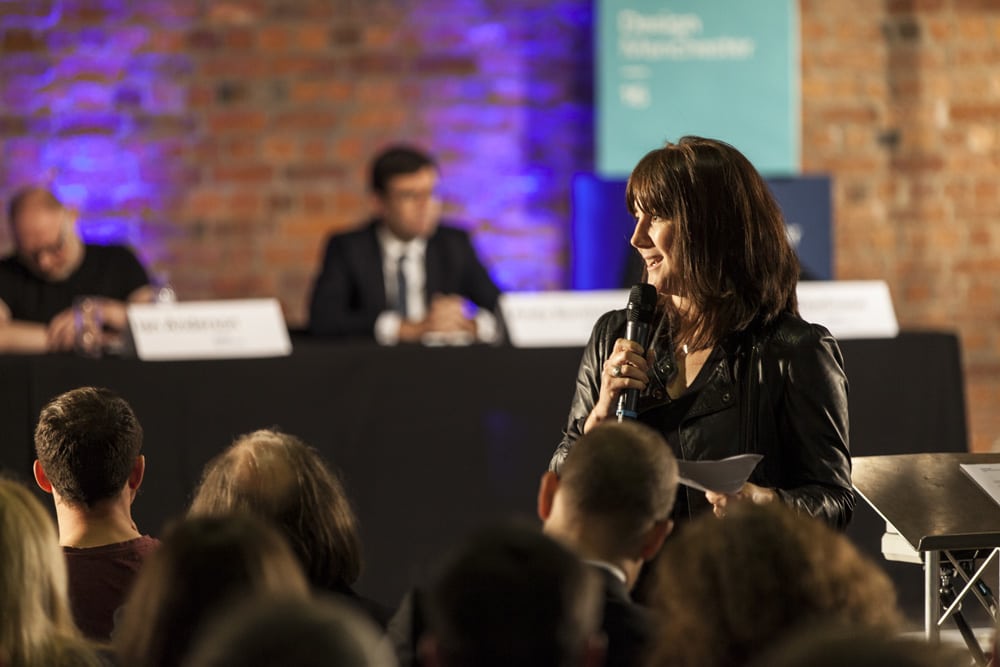 The Great Design Debate: In conversation with Lou Cordwell OBE

Ahead of the sixth annual series of the ‘Design Manchester Festival 2018’ (DM18), I had the opportunity to speak with Lou Cordwell OBE — the CEO of ‘magneticNorth’ and Chair of the Advisory Board of DM18.

The Design Manchester festival will commence on the 10th October and run until the 21st, providing a variety of events ranging from talks and debates to workshops and exhibitions. Cordwell informs me that the aim of the festival is to provide a “showcase of world-class design thinking” highlighting Manchester’s position as “the credible Capital of design.”

Cordwell describes the festival as “a window into the Manchester design community, once a year” where “people who don’t normally mix” within the community are united by “a shared passion for design and Manchester.” The festival seems to reinforce the aims of the Northern Powerhouse project, placing “a spotlight on Manchester as a significant creative hub; being the fastest growing city in the UK.”

When Cordwell isn’t bearing the flag for the Design Manchester festival, she is running her company, magneticNorth — an independent, digital design company which she founded in 2000.  Having been inspired by the young, boundary-pushing creative houses of the 70s, such as ‘Saatchi & Saatchi’, Cordwell says that she felt an “itch to scratch around newness and [push] the boundaries.”

Following the internet boom in the late 90s, she decided to leave her traditional communications background and pursue a creative career. Out of this move, she established ‘magneticNorth’ and relishes in the variety of her work, which is “constantly moving and changing” in an internet era. Despite having worked all over the world, Cordwell refused to establish herself in London, dryly remarking, “we invented the computer for god’s sake, we should be able to build a tech business here.”

On Thursday 11th October a debate will take place at the ‘Manchester School of Art’, as part of DM18. Cordwell is one of an exciting panel of speakers who will be debating the motion — ‘All Schools Should Be Art Schools’.

Given the recent decline in the number of students studying arts subjects, this debate could not be more timely. According to the ‘Education Policy Institute’ (EPI), the diminishing number of arts students is due to a combination of factors, including Government policies like the Progress 8 performance measure, which centres its results on traditional academic subjects, along with wider cuts to education.

When asked to outline her position within this debate, Cordwell informs me that “there’s a really strong social and economic argument.” Despite being considered “the fluffy stuff,” Cordwell describes how the arts are endlessly important given the technological revolution on the horizon.  With the growth of AI and technology causing the loss of many jobs, Cordwell claims that the demand for “original thought — the thing a machine can never do” necessitates “people being brilliant at thinking creatively.” Arts funding, therefore, is a must.

In tandem with this economic argument, Cordwell underlines the social importance of the arts: “given the spiralling rates of depression and anxiety, we need creativity more than ever.” Cordwell describes how there’s a “need for enjoying the work we do, it is a way of feeling fulfilled,” therefore we ought to “put the arts at the heart of schools.”

The DM18 festival has been planned in a way which maximises accessibility, with a focus on “scheduling and affordability” to ensure the engagement of a diverse community. With events taking place in the evenings, Cordwell says that the festival is designed to be compatible with a school and work timetable so that no group is excluded. Given her support of the arts on economic and emotional levels, Cordwell is keen to ensure the DM18 festival pursues this aim by reaching as many people as possible.

You can find out more about the festival’s events through the link: http://designmcr.com/