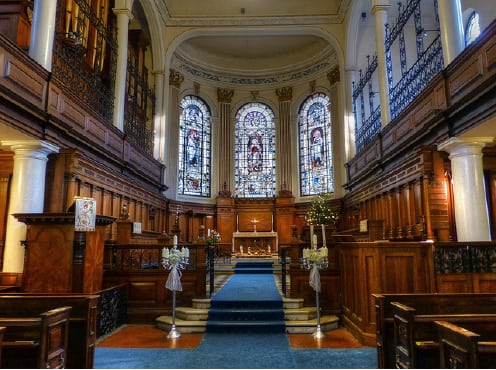 The Church of England is facing oblivion, fewer and fewer Brits claim to belong to the Church and fewer still regularly attend church services. Today, more than half of the public, and more than two-thirds of those aged 18-24 describe themselves as having ‘no religion’. The University of Manchester’s own Christian Society has slightly over one thousand Likes on Facebook. Not a particularly large number in a University of forty thousand students and is less than, for instance, the Cheese and Wine Society, Anime Society, and Swing Dance Society. Given its dwindling status, why is the Church of England still allowed to interfere in education and public life in Britain?

This is most obviously the case in the Houses of Parliament. Twenty-six bishops of the Church of England sit in the House of Lords. Collectively known as the ‘Lords Spiritual’, they have the right to debate and vote in Parliament and are in a position to influence those in Government. They are also entitled to claim expenses for each day they attend the House — this is intended to cover their accommodation and transport costs while in London and may be up to £300. The ‘Lords Spiritual’ claim to offer “spiritual insight to the work of the Upper House” and yet speak only a handful of times each year. Is this service still needed in a country of non-believers?

The presence of Bishops in the House of Lords privileges a particular denomination of a particular religion which most of the population no longer feel an attachment to — this is undemocratic in a multi-faith society such as Britain. Iran is the only other country to include religious leaders by right in its legislature and the United Kingdom is the only democracy to do so. The ‘Lords Spiritual’ are a relic of the Middle Ages that should have been abolished with monarchical rule. Even Boris Johnson has acknowledged that this arrangement is archaic, describing the Bishops as “clerical fossils”.

Christianity also continues to interfere in education. Students in state schools are required by law to take part in an act of collective worship each day of “wholly or mainly of a Christian character.” Parents have the right to withdraw children from worship yet many are reluctant to do so; they should not have to withdraw their children from part of the school day because they are not Christian. Many readers may recall singing hymns and praying in school assemblies despite not really being religious or knowing anything about Christianity beyond the nativity.

Compulsory worship is clearly an obstacle to building a secular state and, like the ‘Lords Spiritual’, could be easily abolished. These criticisms are not about being anti-religious or wanting to drive theists out of politics, they are about rejecting the privileged position of the Church in modern, secular Britain. We are no longer a deeply religious country, Britain must catch up with other democracies and reform the relationship between church and state.