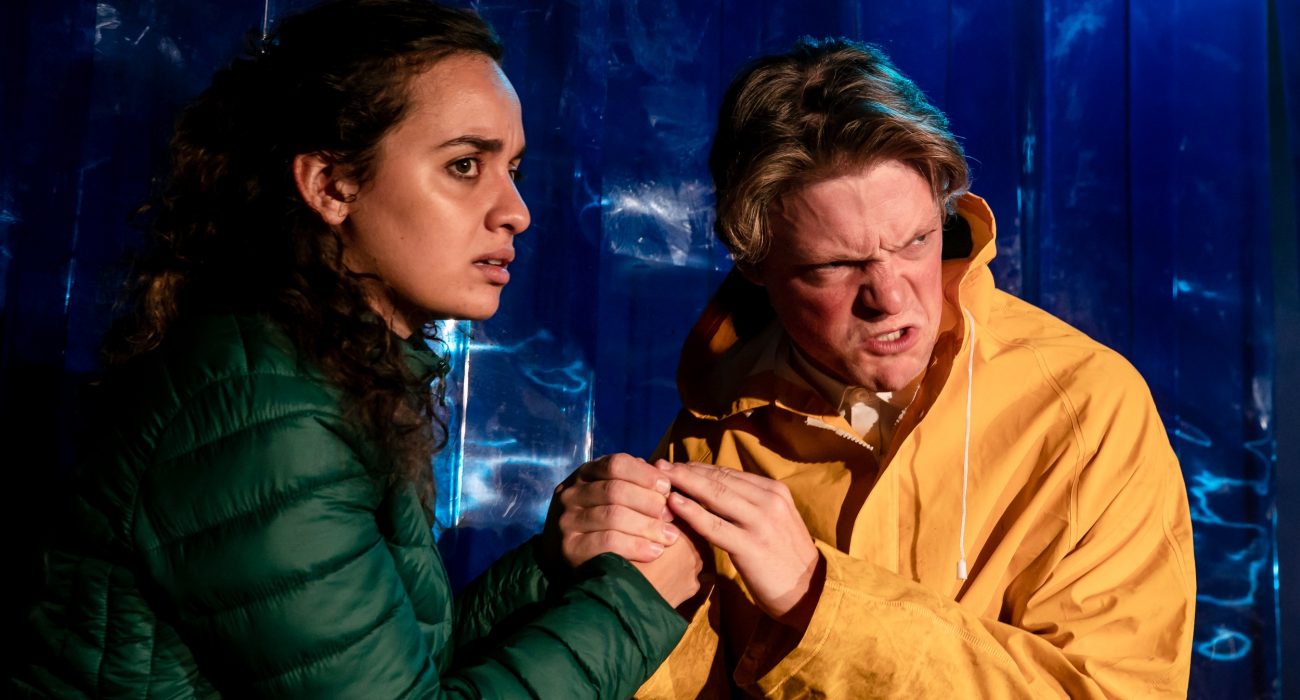 “On a scale of purple to red, how has the crisis affected you?” This is the question we were met with before the play began.

I replied with pink and was met with a strange look (I later learnt I wasn’t the only one) and a stamp on my hand that read ODDJOBS. My plus one answered within the guidelines and got a more ‘positive’ stamp of LEADING. I was taken to my seat, and greeted with a harsh, loud ‘SIT HERE’, whereas those marked LEADING received a choice and pleasant demeanour accompanying them to their chosen seats. It was an interesting concept to bring the audience the first a taste of the hierarchy and tension which pervades through the whole production.

The show, aired at the Royal Exchange Theatre, promotes itself as an education about the history and future of civilisation. The cast members Everal A Walsh, Nadi Kemp-Sayfi, and Sam Redway play more than ten characters between them, spanning over multiple episodic-style acts. With a running time of 70 minutes, it feels longer than it is. There are chorus-like interruptions which become more and more erratic as the ‘programme’ becomes more and more digitally, metaphorically and literally corrupted.

‘War with The Newts’ is actually a book — a science fiction written by Karel Čapek published in 1936. This was a horrifying realisation, as I thought it was written especially for our modern times. The theatrical production brings the horror of the 1930’s era of tension to new heights.

This ‘height’ was often literal, as in one of the major scenes when Kemp-Sayfi stood on a staircase in a bright spotlight, spouting comments about new civilisations and regenerated communities. Fascism is well and truly back, in theatrical fashion.

The show engages with multiple, interconnected themes, such as technological developments through the semi-autonomous newts who are utilised (enslaved) to become a new workforce, and the subsequent disenfranchisement of workers. One powerful scene was the bathos-infused scene culmination of England becoming a form of reparation for the newts and the subverted idea that immigration has left the disenfranchised British population as the largest refugee population in Kazakhstan. It would be a privilege to call the show absurd: unfortunately, it makes all the sense in the world.