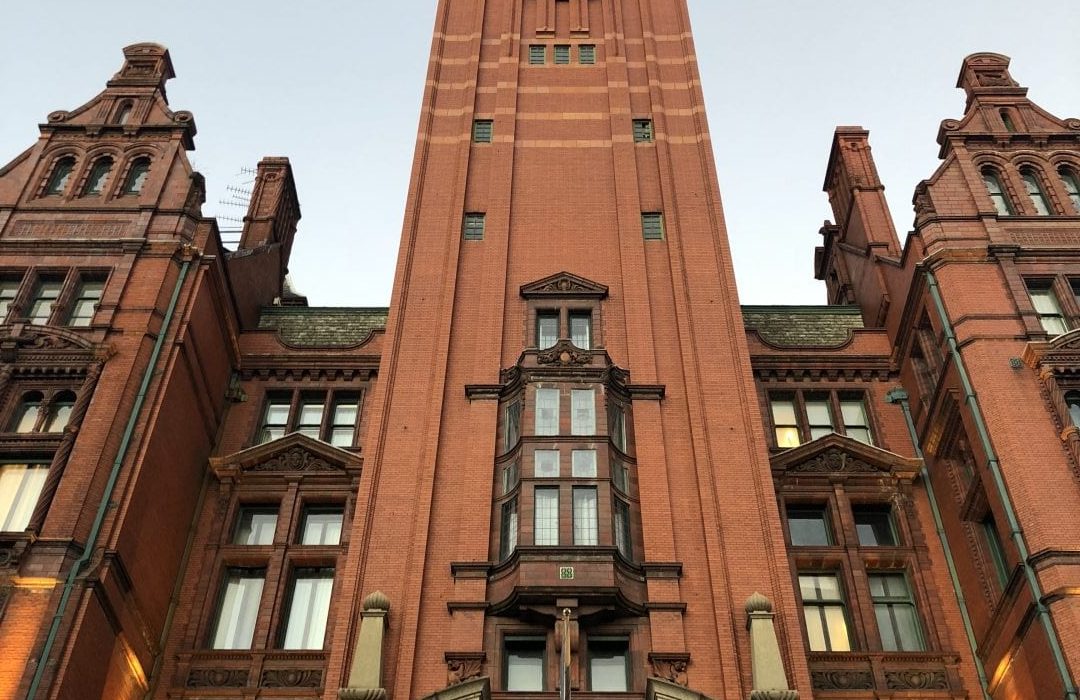 Artefact of the Week: The Principal Hotel

‘The Principal’. If you have been living for any amount of time in Manchester, you will know what I’m talking about. No? It’s an impressive, Grade II listed, Victorian-Gothic style terracotta building, dominated by a sixty-six-meter-high clock tower. Better? Yeah, it’s pretty hard to miss.

We all know it as a swanky hotel, however, this has not always been the case. The first part of the building was commissioned by the ‘Refuge Assurance Company’, an English life insurance and pensions company founded in 1858. Alfred Waterhouse was put in charge of the design, and the building was constructed between 1891-1895.

Although the name Waterhouse might not ring a bell, he is behind quite a few buildings you might be more familiar with. Not only was he responsible for the creation of the Natural History Museum in London and the Manchester Town Hall, but he also designed our very own University, specifically the buildings around the Old Quadrangle, where Christie’s Bistro, Whitworth Hall, and the Manchester Museum are situated.

His son, Paul Waterhouse, went on to add an extension to his father’s initial plans for the ‘Refuge Assurance Company’ building between 1910-1912. The clock tower, which we all know so well, was added as part of this extension. It is interesting to notice that each quarter hours on the clock is indicated by a stylised Manchester Bee. The architect, Stanley Birkett added a final extension to the building in 1932.

During WWII, the building never fell victim to a direct hit, however, the roofs did suffer some damage from incendiary bombs. As a result, ‘The Refuge’ took the initiative to build two reinforced air raid shelters in the basement.

When the ‘Refuge Assurance Company’ decided to change office locations in 1987, the building was left pretty much abandoned — with the notable exception of a caretaker and the ghost of a war widow who had committed suicide by jumping from the top of one of the staircases.

Attention was brought back to the building in 1996 when it was converted into the ‘Palace Hotel’ by Richard Newman. In 2016, the hotel underwent an extensive £25 million refurbishment. Today, it is home to the largest ballroom in the North-West. In the main hall, one finds an impressive sculpture of a black horse designed by Sophie Dickens, the great great granddaughter of Charles Dickens.

You can now enjoy a coffee, a meal, or even a few drinks in the wonderful setting of ‘The Refuge’, the hotel’s dining room and bar, or go roaming around the corridors to get a glimpse at the various historical features that have remained despite the passing of time. And who knows, if you go late enough at night, you might see a ghost!