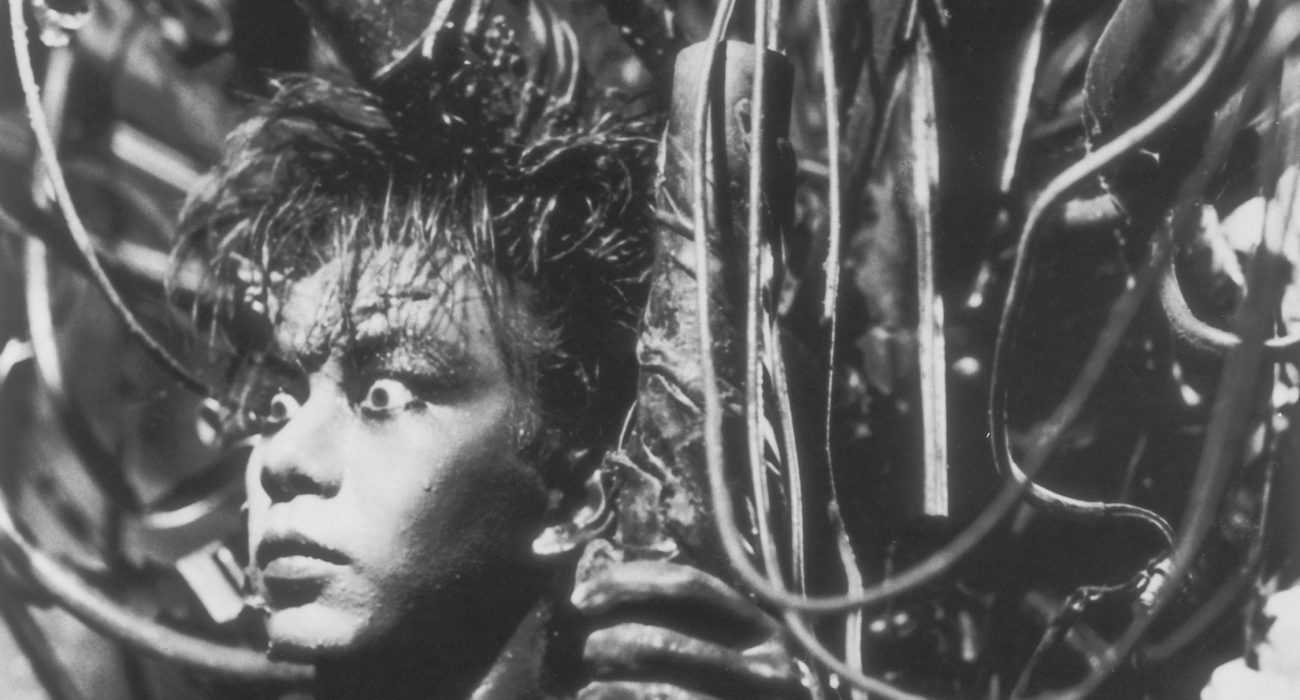 HOME Cinema recently screened the 1989 Japanese film Tetsuo: The Iron Man, as part of Asia Triennial Manchester (ATM). ATM is a visual arts festival across Manchester showcasing film and art with the theme of Asia. It was the first of a number of screenings at HOME that are said to be collectively part of Japan’s ‘early punk generation’.

Directed by the then 29-year-old amateur filmmaker Tsukamoto Shinya, Tetsuo: The Iron Man is both a thrilling and horrifying film. Produced on a very small budget, shot in black and white, and with largely handheld camerawork, The Iron Man follows the story of a nameless man in a world where metal creatures start to ‘infect’ and take over helpless victims.

The opening scenes set the tone with visibly suffering people consumed in some kind of metallic hellscape. It is a vaguely familiar factory setting, but made unfamiliar through unusual camera angles. Throughout the film are recurrent themes of the meshing of man and machine, usually in particularly graphic ways. The blood and gore are unrelenting in some aspects which might be off-putting to the more squeamish. The special effects are exceedingly realistic and become increasingly torturous as the film progresses. This metallic infection corrupts people to produce something neither man nor machine, but a grotesque amalgamation of the two.

The protagonist in one sequence is chased down by a metal-ridden woman in a train station and the unique cinematography is perfect at capturing his sheer fear and desperation. This is created by shaky handheld tracking, upside-down panning and constant shifting between close-ups and wide shots. Accompanying much of this was an imposing soundtrack composed almost entirely of factory-like sounds. The clanging, scrapes and thrashing of metal provide the ideal backdrop for the disturbing world created.

I found the sexual elements of the film fascinating, with the ‘punk’ notions of the film definitely extended into challenging sexual norms and taboos of Japanese society. They were, however, challenged to an extreme. In a dream sequence our man is raped by a devilish version of his girlfriend wearing a massive metallic snake, no doubt highlighting his subconscious fears. In waking, only the next scene, his penis transforms into a giant drill. This is only the first part of his metamorphosis.

Throughout the film I felt constantly on edge — quiet scenes are invariably sandwiched between those filled with blood and screams. The acting is certainly horrifying, although at times is quite exaggerated. I felt that all the emotions expressed in this film could be generalised into either anguish, fear or rage. The last third of the film lost some of the thrill with protracted, gore-filled battle scenes between people who just seemed to keep coming back to life.

Tetsuo: The Iron Man was and is a ground-breaking Japanese film, not least for its power to instil a deep sense of unease in the viewer. It remains largely obscure except for fans of the body-horror genre, but I would recommend it to anyone as a disturbing, raw and impressive piece of film.