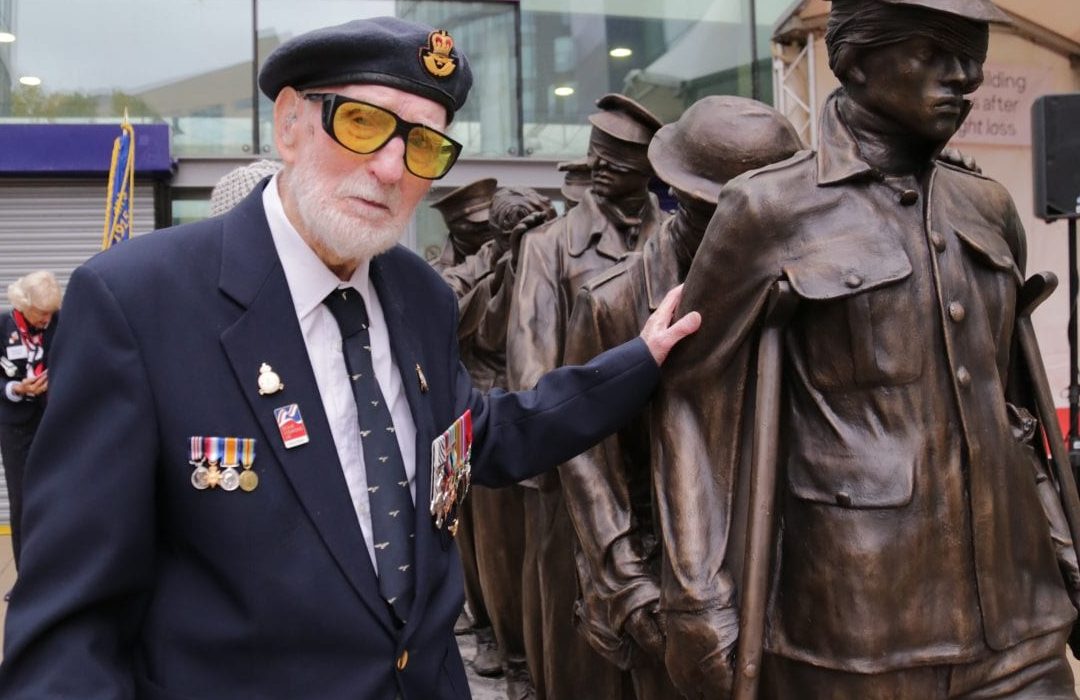 Victory over blindness: an interview with veterans

Marion Burrows joined the Woman’s Royal Air Force in 1951 and worked in catering in St John’s Wood. She began to lose her sight nearly 10 years ago due to macular degeneration. I meet Marion at the unveiling of a new war memorial in Manchester, which was commissioned by Blind Veterans UK , a charity that works to support veterans who have returned home only to fight a new battle; that of blindness. As I draw up a chair, she’s chatting away before I have chance to sit down, and I dive in my bag to quickly grab my notebook before I miss any detail of the story I am about to be told.

The first thing Marion tells me is that it was Blind Veterans UK who telephoned her when they heard about her condition – she didn’t have to reach out at all. This sets the tone for the rest of our conversation, gratefulness shining through every word she says. In-between telling me about herself, she also takes a keen interest in what I am doing. She jokes and tells me how her grandson studied IT at The University of Manchester. “I’m all over Facebook”, she tells me later on, “not sure what it is, but I’m there”. Having only been involved with the charity for three years now, Marion has already received a wealth of support. From IT help (so she can keep up with her grandson) to microwaves, “they make me feel safe at home”.

She was an amateur painter before her sight began to decline, and had feared that would be the end of her artistic journey. Yet with the charity, she tells me, she was able to attend some arts and crafts workshops. Soon after, she received a package at home containing brushes and paints. I sense an underlying passion and ask her what she likes to paint. “Oh anything! Everything around me inspires me”, she replies.

In the middle of the interview she stops talking and begins fumbling with her bag. After helping her with her zip, she brings out a black and white photo of herself aged just 17 when she had just signed up, a photo with the name ‘Alma’ written on the back. A nickname of her mother’s, she explains, “as there were too many Marions around at the time!”. It was difficult for her family when she joined up, “I broke my father’s heart”, she tells me. Yet when she saw his smile, coming home in her uniform, she knew that she had made him proud.

Asking more specifically about the unveiling that morning, I am bombarded with too many words to jot down on my pad. “Emotional”, “overwhelmed”, and “tears” are what I manage to write down before she pauses, wanting my full attention and saying in a more serious tone, “It was an honour to touch every one, I wanted to salute them”. It is only when she is told that her taxi is waiting that she reluctantly winds up the conversation, realising in the process that she has forgotten to finish half of her lunch in her eagerness to share her story. To finish, she sums it up in a single line. With Blind Veterans, there is “nothing you cannot do”.

Simon Brown is another of the veterans that I speak to at the event. He was shot in the face with a sniper while serving in the Middle East. He was in a coma for 17 days and his left eye was completely destroyed. The first thing I notice about Simon is the impressive set of medals lining his lapel. Standing up amongst the hubbub of people chatting and laughing, I have a direct question for Simon and I get to it straight away. What does it mean that this is the first war memorial of a total of 77,000 in the UK to depict a disabled service man? He is very quick to take a positive stance. He explains to me that disabilities have always been seen through a screen of fear and intimidation. When asked whether this was something he himself had experienced, he tells me about times when children had asked questions about his condition, only to be quickly hushed by their parents. The statue is “a sign of the times”, he says, “disabilities are no longer in the shadows”.

Simon now works for Blind Veterans UK. Currently he does not need support, but with Blind Veterans UK, he explains, you know the support is always there. He sums it up in a word; “safety”. When I ask whether this statue marks a change in the way that we see disabilities, he tells me that there is a way to go yet. What sticks with me is his hope that the statue will someday become “iconic”. “Once it gets a nickname then we know that we have done something special.”