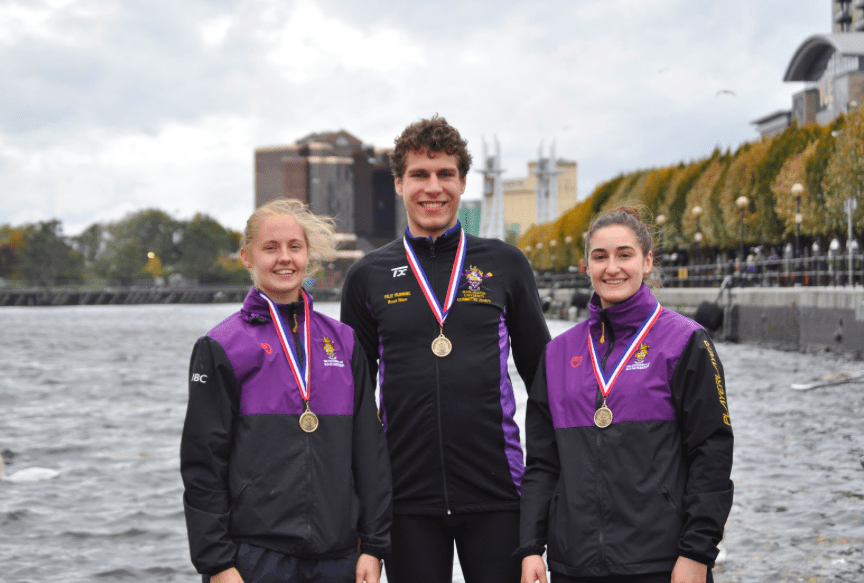 With 20mph winds, there were fears that the race, which runs through the Spinningfields and Deansgate area of Manchester and finishes outside The Lowry and Imperial War Museum North in Salford, would not get off the ground. Despite this, the Manchester senior men’s and women’s teams ploughed on regardless.

The first rower of the day was Felix Rummel who braved the weather to win the first gold of the day in the men’s single event. Shortly after, Rosa Thompson and Emelia Cole joined Felix on the medal table taking home a second gold in the women’s double event.

Despite racing already that morning, Felix raced again alongside Francis Heylen in the men’s double event, taking home the third gold of the day and maintaining the University’s winning streak.

Next up was the men’s coxed four, who took home the fourth and final gold of the day. With Alex Davies, Matthew Layton, Harry Dalrymaple, Ghazn Khan, and cox Ruby Jordan racing against several crews, including a second Manchester University boat, to win their race.

Regrettably, the weather got the better of the event, with the rest of the races having to be cancelled due to the course becoming dangerous for both competitors and marshals, meaning that many of the senior women’s crews to miss out on their first race after a long summer off.

However, the club hopes that both the women and the men’s crews, as well as the new novice teams, will have another chance to test their strengths with the BUCS races beginning soon.