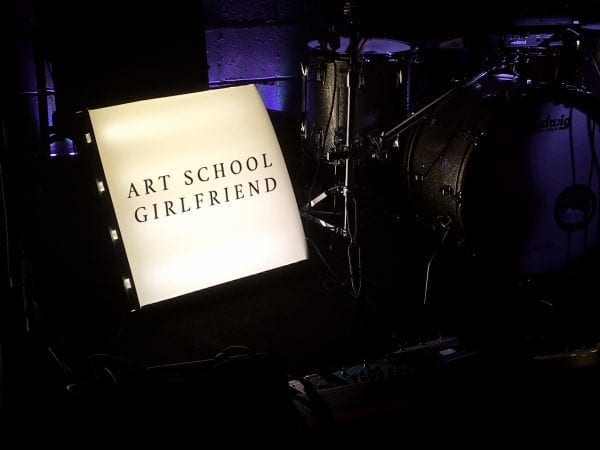 Underneath the moniker of Art School Girlfriend is a quartet of long-time friends and collaborators. The spotlight here, however, is on Polly Mackey — former member of four-piece shoegaze band Deaf Club. After taking time off for a personal musical cleanse, Mackey debuted her first EP Measures back in 2017 which turned the heads of underground music junkies. With her second EP Into the Blue Hour, Art School Girlfriend draws you into a feeling of overwhelming insignificance, especially with its standout track ‘Distance (Blank)’; the single embraces the feeling of claustrophobia with intense drums and unsettling melodies.

Mackey’s background has clearly weaved its way into her songwriting. In conversation, she admits how nature often finds its way into her lyrics, sometimes to her own surprise after re-visiting previous work. Her time living in the small seaside town of Margate clearly influenced how she portrays space, atmosphere, and isolation.

Despite how often her music references nature, Mackey seems to approach songwriting with a precise and almost scientific way of experimenting with new sounds. Whilst part of Deaf Club, she hoped for more creative authority when recording; with her now greater control she finds she enjoys her time, as a self-proclaimed perfectionist in the studio, much more. Mackey much prefers to release music when she deems it ready instead of adhering to deadlines and speaking with her makes it quickly apparent she is devoted to ensuring her sound suits both her and the project.

Taking time out from music after the dissolution of Deaf Club was important for her to learn more about herself until she felt the time was right to start writing again. The hiatus was not only from song-writing but from music in general. Mackey found that songwriting for too long had corrupted her ability to enjoy music any more. She could no longer attend gigs or listen to albums without over-analysing or constantly borrowing new ideas for herself. Returning as Art School Girlfriend, she feels a physical and mental sense of separation between the two projects.

The return to songwriting and touring after this lull makes one point clear: pursuing her talents in music is not just something she wants, but something she needs. This desperate necessity for music is apparent as you watch her drift and sway into the atmosphere of the songs. Her stickler ways in the studio also creep their way onto the stage, hoping to provide an alternate experience to the record. Where her EPs are sharp and pure, the live performance was organic and packed with layers. In the recently christened venue of the YES basement, Mackey’s voice was heavenly. The performance had the intimacy of an NPR Tiny Desk Concert, as well as the same hushed awkward moments brushed quickly away. This, however, in no way meant it lacked any punch; Art School Girlfriend still managed to cut deep on stage.

Like her music, the name Art School Girlfriend was also the result of lengthy deliberations. This is commonly thought of as the hardest part of any project since it must represent both the writers and the sound behind it. Mackey seems proud of the name given that it has garnered so much attention. Identity seems important to her; despite the fact that the name is not hers; the name arose from her girlfriend, who did indeed go to art school.

The future looks bright for Art School Girlfriend. Mackey hopes to take advantage of the dark and gloomy winter months by hibernating in the studio to record her first album which she plans to release in the upcoming year. It comes as no surprise that Mackey finds her song-writing much easier in the winter, especially for this project. More details can be found here.