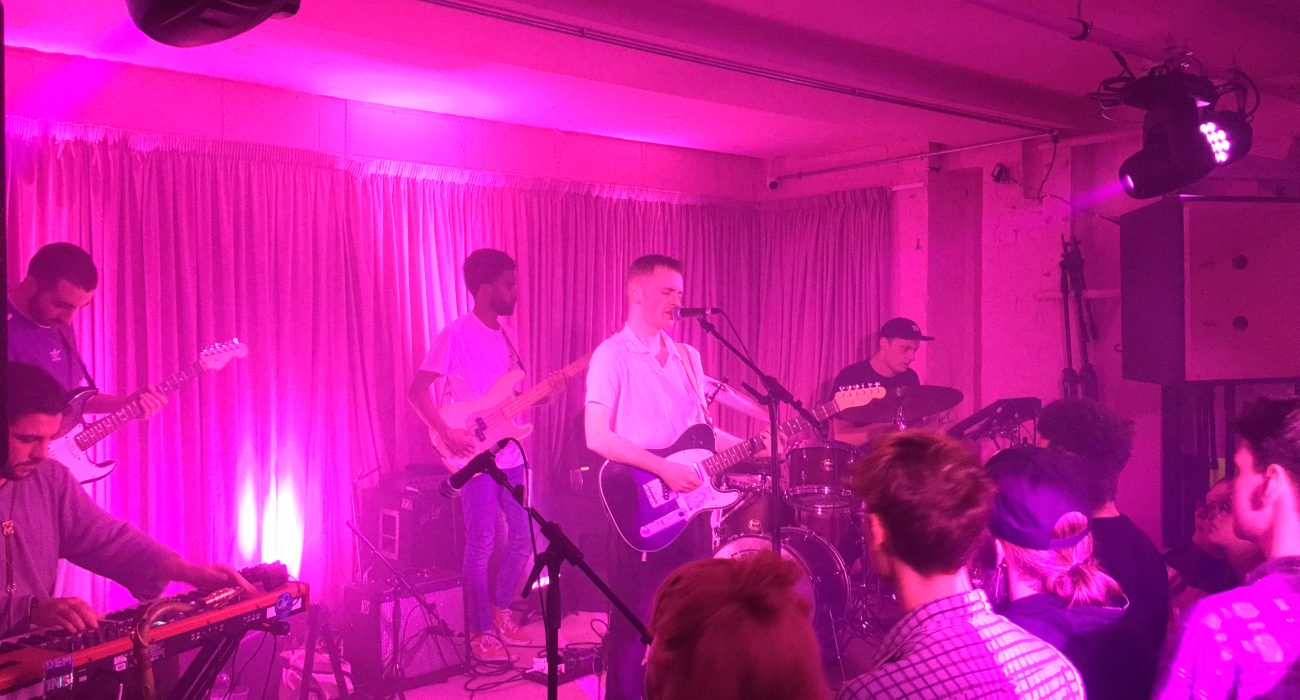 With stellar support provided by Birmingham’s Chartreuse and South London’s Sunken, the bar was set high before Puma Blue hit the stage. The infectious rhythm from the prior two acts was a sign of things to come, with all three bands showcasing symptoms of the new wave of fusion jazz music seeping out of the United Kingdom.

After a prolonged silence, the lights in the one-month-old, YES Manchester’s Pink Room dimmed as the band took to the stage, and the newly released track used to tease the group’s forthcoming Blood Loss EP, ‘as-is’, began to fill the speakers — the crowd eagerly gathered closer. Spearheaded by singer-songwriter Jacob Allen, the five-piece seamlessly transitioned into the slow dance ambience of ‘Want Me’, one of their earliest releases, with Allen’s renowned soft-spoken vocals resting easily on the band’s tight-knit backing.

Drifting through the set, Allen effortlessly crooned his popular ballads, such as ‘(She’s) Just A Phase’, ‘Moon Undah Water’, and the newest addition to his discography, ‘Midnight Blue’. Regularly switching up his vocal tone and pitch to suit the mood whilst saxophone riffs floated tenderly over the bass line, Allen paused to check on how the crowd were doing, and display his love for the city due to his mother’s roots here.

During the hour-long set, unreleased gems such as ‘Lust’ and ‘Limbo Lake’ were also performed, highlighting the inspiration Allen receives from the nature of water which sparked energy in the crowd. The band’s strong cohesiveness successfully heightened tension in the tracks, forcing everyone in the room to groove heavily when the drums kicked back in. If the new songs were to serve as a taster for his upcoming EP, then we were in for a treat.

With a string of fantastic releases, and a band as flexible as Allen’s that will produce live performances to blow anyone away, fan or not, it’s clear to see how London-based Puma Blue is steadily ascending in popularity — and deservedly so. The new EP, Blood Loss, will be out November 2nd on Blue Flowers Music.