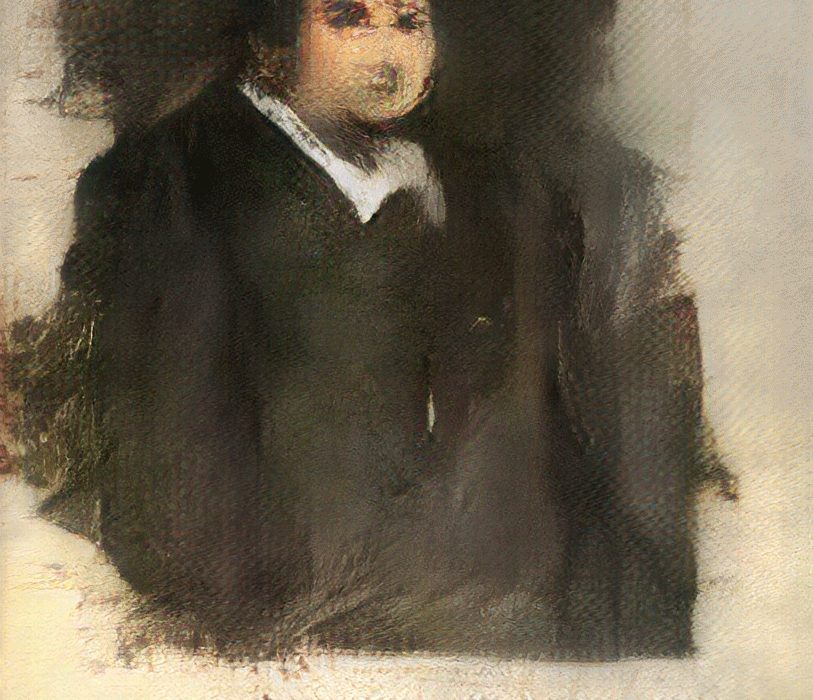 Last week, the ‘Portrait of Edmond de Belamy’ sold for a huge $432,500 at Christie’s, over 40 times the amount it was initially valued at. The work seems unusual for the steep price paid and has a very unique style that makes it seem almost unfinished. The portrait is off centre on the canvas, and in the bottom right corner, there is an unusual signature. Rather than an artists initials or name, there is a mathematical equation inscribed.

The work has been created by the French art group ‘Obvious’, using a GAN. The question of how much credit can be given to ‘Obvious’, however, is controversial. As well as this ethical conundrum, the amount of code they actually wrote themselves to create the piece is also debatable.

‘Obvious’ has admitted to using an open source code created by someone else, borrowing a component of Robbie Barrat’s algorithm. Barrat is a recent high school graduate who shared his algorithms on GitHub, a computer-code hosting website.

Because the code is open source, anyone is allowed to read, use and make changes to his code. ‘Obvious’ have used this to their advantage, as there are even comments on GitHub where a member of ‘Obvious’ is asking Barrat to edit his code. ‘Obvious’ argue that although they are using Barrat’s algorithm, there is a lot of effort put into ‘making it work’. But what that entails is ambiguous at best.

The AI art community is also quick to point out that there is nothing particularly special or creative about ‘Obvious’’ pieces. Mario Klingemann, a Germany based AI artist, says it’s something that “everybody can do. You can clone [copy] this code from GitHub, start your computer and start doing it.”

This new form of artwork has dubbed ‘GANism’ – named after the type of AI used to create it – and will have an interesting future. Regardless of the work’s true author and the creativity of the group, the huge price paid for this work is a big step for the realm of AI art.