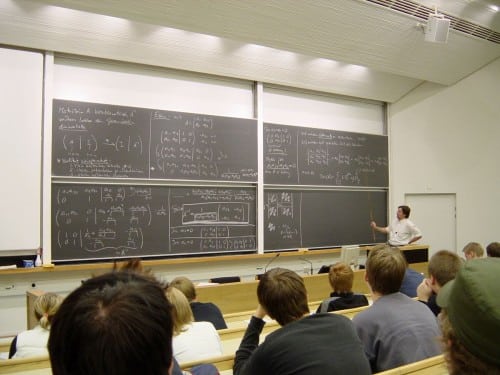 University tuition fees could be cut to £6,500 under measures proposed from a government review.

The report commissioned by Prime Minister Theresa May also suggested that fees for subjects that could lead to higher earnings, such as medicine or science, could be raised to up to £13,500.

The proposal has divided students, who all currently pay tuition fees of £9,250 a year, with some dubbing it “shocking” whilst others say it is “fair”.

Some argue that tuition fees for STEM degrees should be higher as they are more expensive to teach and could lead to higher-earning jobs after graduation.

Others are strongly against the idea, suggesting that it could lead to a lower status for arts and humanities degrees and create a two-tier system.

Concerns have also been raised over the social implications of the proposals, arguing that higher fees could discourage students from lower income backgrounds to pursue STEM subjects.

Second-year Physics student Olivia Murray told The Mancunion: “Forcing a fee gap between the arts and the sciences will only reinforce the false dichotomy between them. By adjusting the fees, both fields will suffer; the arts will be perceived as a lesser class of degree, and students from low-income backgrounds will be discouraged from applying for the sciences due to the overwhelming debt.”

Another student who chose to stay anonymous said: “From my perspective as a medical student I think it’s really problematic. Medicine already has a rep for being a course that’s generally only available to you if you’re middle class. It’s one that a lot of unis try to compensate with for having medicine specific widening access schemes. I really believe medicine needs people from all different sorts of backgrounds as it will make us all better doctors.

“I think if fees went up it would really put some really good people from lower socioeconomic backgrounds off medicine.”

However, other students are in favour of the proposals. Second-year History and Politics student Sam Honey said: “The principle is entirely fair – fees should reflect the price of resources and other costs. Quite simply, science-based subjects will tend to be more expensive, and students should be prepared to respect that.”

Some felt the report relied on generalisations; second-year Lizzie Hartree asked: “What about degrees like film which are arts but cost a lot? I don’t think it’s a good idea.”

The report comes on the heels of Chancellor Phillip Hammond’s latest budget, which failed to make changes to the current tuition fee or student finance system.