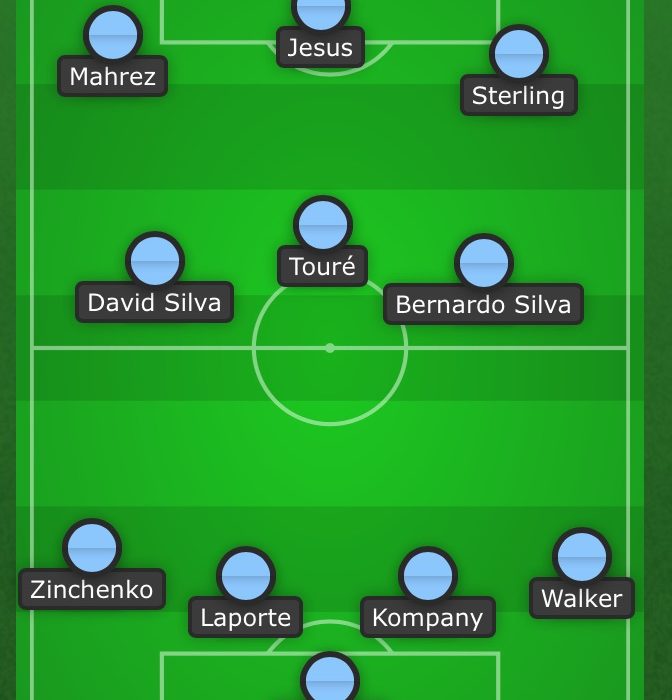 Manchester City cruised to a third-straight champions league victory with an emphatic defeat of Ukranian side Shakhtar at the Etihad.

Pep Guardiola’s side secured a sixth straight win in all competitions, keeping their fifth clean sheet of the run in what is fast becoming an irresistible vein of form.

The sky blues headed into the fixture with the Manchester derby in mind, resting Vincent Kompany and Benjamin Mendy completely, while Leroy Sané and Sergio Agüero were benched.

21-year old Oleksandr Zinchenko was handed a start against his old club, having been left out of the 18-man matchday squad in the reverse fixture, despite speaking at the pre-match press conference.

Gabriel Jesus was given the nod upfront, despite having scored just twice this season, going into the game.

City started slowly, as Shakhtar looked to sit deep and contain the hosts, but were ahead with their first clear-cut opportunity on 13 minutes.

Riyad Mahrez dribbled his way through the Ukranian side’s backline before his low cross was turned in by David Silva, who became City’s all-time top scorer in European competition in the process.

The Citizens’ second came in highly-controversial circumstances, as a scandalous penalty was awarded to the home side, with Raheem Sterling clearly going down in the box untouched. Referee Viktor Kassai awarded the spot-kick however, and Jesus duly stepped up and converted it.

The Brazillian nearly scored the third moments later after being put through by Sterling but saw his effort smothered by keeper Andriy Pyatov.

The Ukranian side looked to get back into the match after the break, with captain Taison providing a respectable performance on a miserable night. City put pay to any hopes of a comeback just three minutes into the second half, as Sterling brilliantly evaded two challenges before curling home from outside the box.

On 72 minutes, Guardiola’s team were given another penalty, this time correctly, after goalscorer Silva was hauled over by Taras Stepanenko, Gabriel Jesus slotted home for his second of the evening.

Yaroslav Rakitskiy forced a save from Ederson in the hunt for a consolation, but the next goal would be a fifth for the sky blues, as Riyad Mahrez brilliantly controlled İlkay Gündoğan’s lofted pass before slotting in.

There was a sixth to come, with just seconds left as Gabriel Jesus raced through on goal, before executing a perfectly-time chip to seal his hat-trick, and round off a top-class performance from City.

The result looked to be enough to confirm the sky blues’ place in the knockout stages of the competition, but a Hoffenheim equaliser deep into injury time against Lyon meant that despite a six-point advantage over the Germans in third place, the Citizens’ will only have their place in the round of 16 mathematically assured with a point in their next fixture against Lyon, and can confirm top spot in the group with a win.

But all in all, it was an excellent night for City, whose performance oozed quality going forward, treating fans to the kind of glorious attacking football that has dominated this side’s display in recent weeks. With Juventus defeated at home to United on the same night, the win re-affirmed the Champions credentials to challenge for a first ever Champions League title.