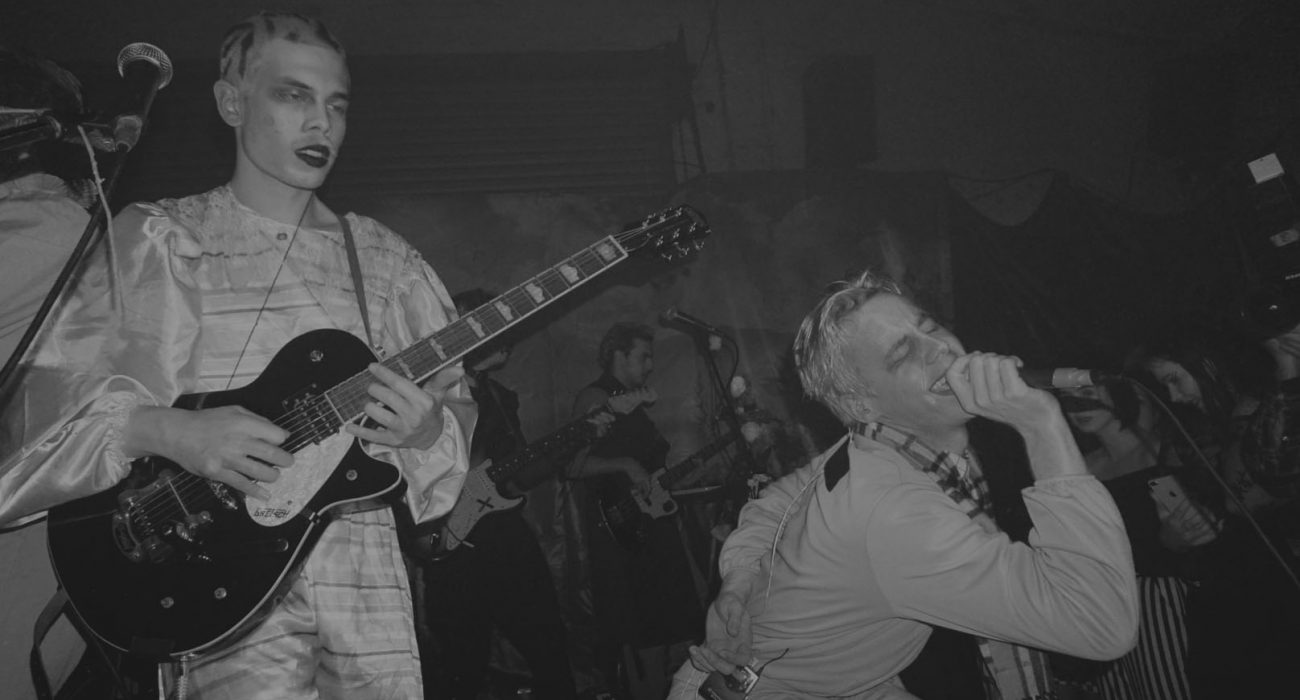 In Conversation with HMLTD

Vivacious glam, punk, pop, rock, sextet HMLTD embarked on their voyage with new punk favourites and Rough Trade’s #1 Album of the Year winner’s, Shame. Both hailing from London, HMLTD have certainly secured their feverish reputation as one of the industry’s most thrilling live bands of the decade.

Thriving off theatrics with an intent to shock their audience, this London sextet delivers performances that utterly blur the boundaries between reality, dystopian parallel universes, and darker literature. Each of the 6 avant-garde, unearthly members are bespangled and garnished with garish costumes, printed scalps and defiant makeup forming one of the most fascinating current bands. In their outlandish realm, “nothing is ever too far.”

Having just released their new “punk-trap” single ‘Flex’, the twisted disco reveal that “the response so far has been great” but as they anticipated, some people were certainly “a bit confused — they love them (us) mixing genres but as soon as they (we) touch popular stuff, they (we) get ‘Oh this is horrible’ as a response.” But HMLTD stand firm in their creative decisions as they profess that they “love pop,” and that it is “very liberating to be able to write anything.” They see no value in restricting their artistic endeavours, in any capacity.

The backbone of ‘Flex’ was founded when guitarist James began “messing around with a new Japanese folk scale.” Even though the polished version we can now all listen to isn’t exactly reminiscent of the Japanese scale, Nico, the band’s bassist highlights the magic that coincides with an idea that can “blossom into something completely different to how it starts out” but that’s not without “arguments and fights” in the studio he laughs.

HMLTD have worked with a variety of unique professionals in the music and fashion industry who have facilitated exactly how the sextet wish to be presented. By working with Brockenhurst & Sons, the band have been able to experiment with themed performance spaces such as infancy. The band’s London show in Hackney (23rdNov) will take on the role of Frankenstein’s Laboratory. The show is advertised with free masks available at the door upon entry. Alongside this, they are also currently working with “a young, Turkish designer called Dilara Findikoglu” who showcases “amazing vampiric outfits” and has designed them each a set attire appropriate for their fantastical ventures.

As the nightmarishly eccentric and indefinable outfit reached their 5thevening of the tour, they finally greeted the city they’d been “most looking forward to” at Manchester’s O2 Ritz. After their last performance in the vicinity being an astounding grungy, sold-out Valentine’s Day revolt at Salford’s ramshackle White Hotel, the band expressed clear enthusiasm for being back in the northern musical hotspot. They enthused that Manchester harbours a similar music scene to London “with a wide group of people interested in all types of music but the environment is so much more conducive.”

It is clear that the tainted HMLTD possess a strong sense of pride and gratification over their work and what they stand for as a band. This can be seen in their attitude of having “never really felt like a support band — sometimes supports can get a frosty reception but they (we) don’t.” And rightfully so, all it takes is a quick scan of the room and you’d find yourself encircled with their peculiar merch designs worn by fans donned in the same outrageous fashion statements and outrageous hairstyles. This confidence is accentuated with a slight outline of light-hearted frustration. The band that so intrinsically work towards making their performance space as authentic and dystopian as possible have had a “giant fucking Shame banner” to compete with on this tour stretch.

With the band’s clear advocacy of individuality, inclusivity, and freedom of expression, I left them with one final question being, what advice they would offer to the upcoming generation to which James stated “Don’t let anyone fucking bully you at school and don’t feel like you have to dress like anyone else. It’s really hard when you’re young but you should let yourself come out a little bit and people will start respecting that.”

The potent HMLTD entered the elevated O2 Ritz stage with the sound of rapturous applause and equally spine-tingling shrieks. Flamboyant frontman Henry commanded the stage with his chiselled stature, yielding the gaze of every set of eyes that fell on his band of fairy-tale outcasts. Despite a few technical issues, HMLTD yet again put on a performance that left their audience gasping for air, stimulated nervous laughter, but most importantly has undoubtedly left an imprint in the minds of their observers for weeks to come as they return back to their lair for the new year.