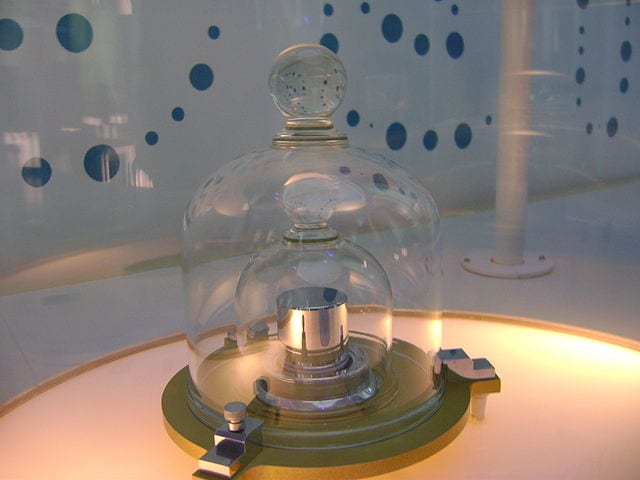 This month, the 26th General Conference on Weights and Measures in Versailles, France, agreed to redefine the mass of a kilogram. For all intents and purposes, the value won’t actually change. The definition of the value, however, will be updated on May 20th, 2019.

In order to keep measurements consistent between teams and fields, scientists and engineers use a system of units known as the SI (Systéme International or International System). The system relies on 7 “base units” from which all other quantities can be derived. These are the metre, the second, the kilogram, the Ampere (a unit of electric current), the Kelvin (temperature), the mole (amount of substance), and the candela (luminous intensity).

To measure a length, metres are used. To measure time, seconds are used. Other compound quantities are measured using combinations. For example, velocity is measured in metres per second. Force is measured in Newtons, where one Newton is equivalent to one-kilogram metre per square second. That is the force required to accelerate a mass of one kilogram by one metre per second per second. In this manner, all measured quantities in science may be quantified with appropriate units.

Clearly, this system relies on consistent definitions of each of the base units. As long as one scientist’s second is as long as another’s, all time measurements are directly comparable.

For a long time, the definition of the kilogram has been problematic. The most robust way to define a unit is with physical constants. Light in a vacuum always travels at exactly 299,792,458 metres per second. The metre is defined in such a way that this is the exact value. The second is defined as exactly 9,192,631,770 times the period of the radiation emitted by a type of Caesium atom at 0 Kelvin.

The kilogram, however, was instead defined with respect to a reference mass. There exists a block of metal in Paris defined to weigh exactly one kilogram. The platinum-alloy cylinder, known as the International Prototype Kilogram, or informally as Le Grand K, was manufactured in 1889 and has remained the gold standard for the kilogram ever since. At the time of its manufacture, several duplicates were made and shipped around the world for reference, with their masses being compared every few decades to ensure the definition remained consistent.

The masses, however, were not consistent. As the International Prototype Kilogram has aged, it has decreased in mass. There are various reasons for this, including radioactive decay of impurities within the metal. As a result, the International Prototype Kilogram is around 50 parts in a billion lighter than it initially was. Clearly, this is not a consistent definition for a unit.

The new definition links the kilogram to the well-defined units of the metre and also through Planck’s constant, a universal constant relating the energy of a photon to its frequency. By defining Planck’s constant as exactly 62607015×10−34 kilogram square metres per second, the kilogram can be reliably and consistently specified, as the metre and the second are already well-defined.

The Kelvin, the mole, and the Ampere have also been redefined. The Kelvin was previously specified by defining the point at which water may be solid, liquid and gaseous as 273.16 Kelvin. It will now be defined by setting Boltzmann’s constant, a universal constant relating the energy and temperature of a gas, as exactly 1.380649×10−23 Joules per Kelvin.

The Ampere will be fixed by defining the charge on an electron as 1.602176634×10−19 Coulombs, where one Coulomb per second is one Ampere.