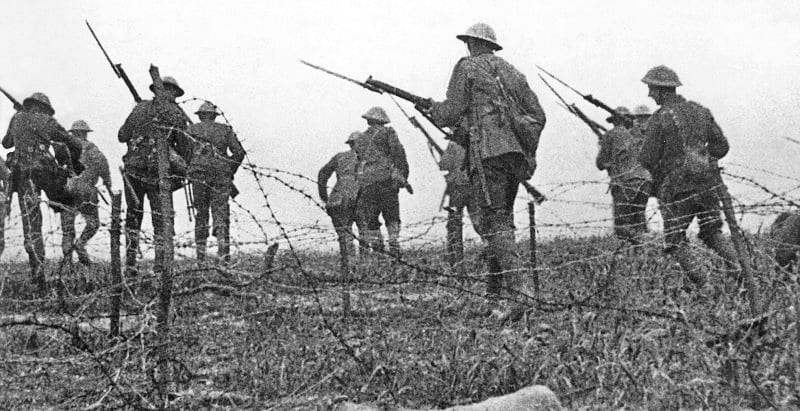 A memorial honouring those who lost their lives in the Battle of the Somme has been erected in Manchester’s Heaton Park.

The unveiling of the memorial took place on the 18th of November, a week after Remembrance Sunday.

The monument takes the form of a large curved wall, and was designed to represent a stretch of the trenches along the Western Front. It reaches two metres in height and seven metres in length, and is inscribed with the words ‘Somme 1916’.

In 2016, Heaton Park was the setting for a Somme centenary commemoration, where 37,000 people visited the park to take part in remembrance events and pay respects for those who fought and died in the infamous battle.

The memorial features 320 unique ‘memory tiles’ that were originally created for the 2016 commemoration. The tiles, which are etched with images commemorating the War and telling stories of its battles, were recast in porcelain before being placed into the wall.

Longsight Councillor Luthfur Rahman said: “No one could fail to have been moved by the events two years ago to commemorate the centenary of the Battle of the Somme, and particularly by the memory tiles that poignantly told the stories behind some of those involved in the battle.

“It’s important we remember the sacrifices made by all those who fought and were injured or lost their lives, and that we pass their stories on to future generations so they also never forget.

“The permanent memorial in Heaton Park is a fitting and lasting tribute to them and will ensure their stories and our memory of them are never forgotten.”

Heaton Park was used as a training ground for army recruits during the First World War. The area hosted the training of thousands of Manchester Regiment troops, before later becoming the location of a military hospital base.

The Battle of the Somme began on the 1st July 1916, and lasted for almost five months. On its first and bloodiest day, 19,240 British soldiers lost their lives — 585 of which were from Greater Manchester.

The day is widely regarded to be the worst in British military history as the battle ended with over a million casualties from across both sides.

2018 marks 100 years since the end of the First World War, which lasted for over four years and affected millions of lives. The recorded deaths of Mancunian soldiers total 23,792.