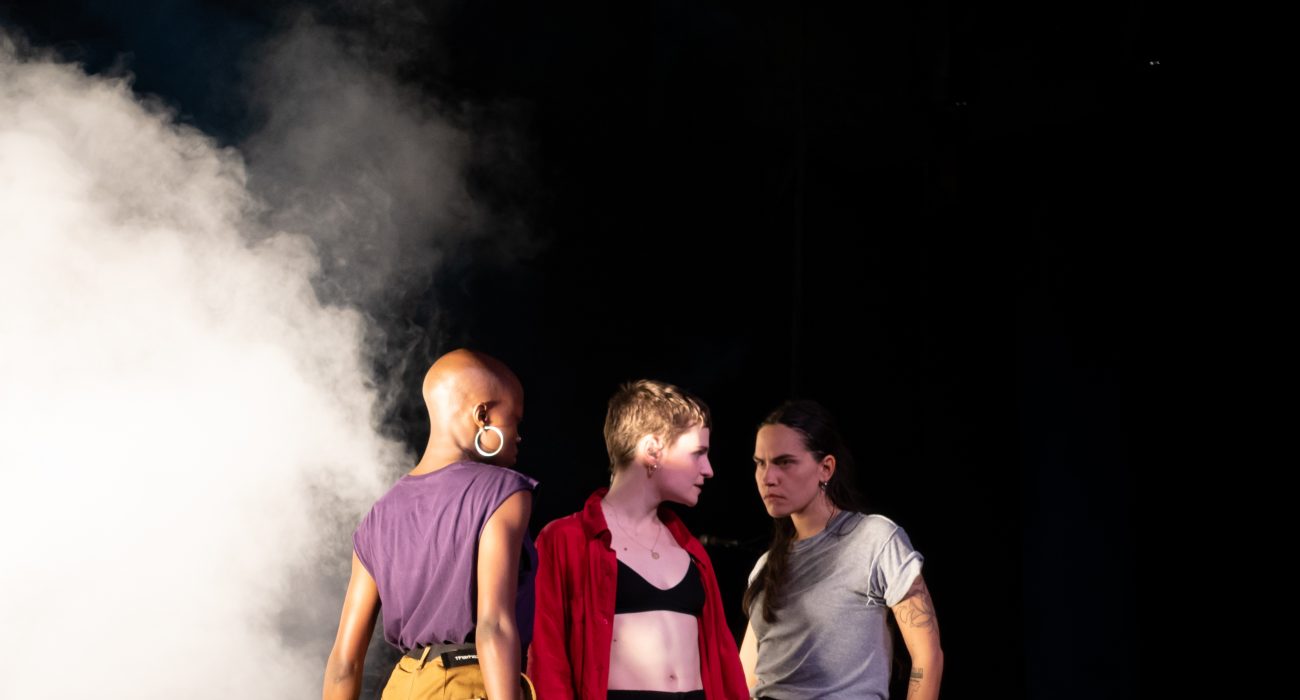 Héloïse Letissier, otherwise known by her stage name Christine and the Queens, has a reputation for creative music and outstanding live shows, a reputation which she more than lived up to at the first of her two shows at the O2 Apollo, a night which showcased her talent, not just as a singer, but as a performer and entertainer.

The first ten seconds of the show set the tone for the whole evening, when six dancers strut onto the stage, followed by Letissier, who is greeted by the name of her new stage character: pansexual, strong, and unapologetic “Chris”.

The set opens with the 80s synth-pop track ‘Comme Si’, during which the audience is introduced to a distinctive and original dance style, which welds the aggression and theatrical elements of West Side Story with the flair of Michael Jackson, a reference that is not lost on Letissier, who leads a ‘Man in the Mirror’ singalong in the middle of the set.

Despite her small stature, Chris dominates the stage, miming punches, kicks, and strongman poses to establish herself as leader of the gang, an image that fits in with her description of her second album Chris as “a bit musclier and sweatier” than the first. Unsurprisingly, hit singles ‘iT’ and ‘Tilted’ are met with unwavering enthusiasm, the soon-to-be iconic dance for ‘Tilted’ manages to be to both graceful and powerful and has the crowd clapping along.

Over and above the impressive dancing, the stage production and visuals are an essential component to Letissier’s journey through her two albums, and no more so than during ‘Goya Soda’, which starts with snow-like confetti that drifts to cover both the band and the dancers in a blanket of white.

Despite the noteworthy theatrics, the show is not reliant on dances or gimmicks, a bright spotlight is enough to create drama and wow the crowd. The lynchpin of the whole production, is, of course, Letissier’s exceptional vocals, which, partnered with ear-splitting synth, floor-shaking bass, and the occasional lyric in French, create a mesmerising intensity.

She demonstrates her vocal ability during a poignant acapella version of ‘Night 52’, alternating between French and English as the crowd attempt to sing along. “Don’t underestimate the power of the French song”, she quips, “that’s some strong shit”.

The last notes of several songs are met with a stunned silence, which, in a venue of 3,500 people, is an astonishing feat. Yet it doesn’t faze Letissier, who laughs “listen to that, you are all paying attention!”. It is through these remarks that we can glimpse the “Heloise” side of her personality, who is chatty, witty and charming.

The set ends with a triumphant encore, with Letissier serenading the crowd with ‘Saint Claude’ from the side of the balcony, a soulful and tear-jerking rendition that sparks a standing ovation. She ends the set by moving into the standing crowd, elevated on a dancer’s shoulders to the pulsing disco beat of ‘Intranquillité’ before taking a bow alongside the band and dancers, an action that points to the essence of the entire night: a Christine and the Queen’s tour date is not simply a concert, it is a show in its own right.