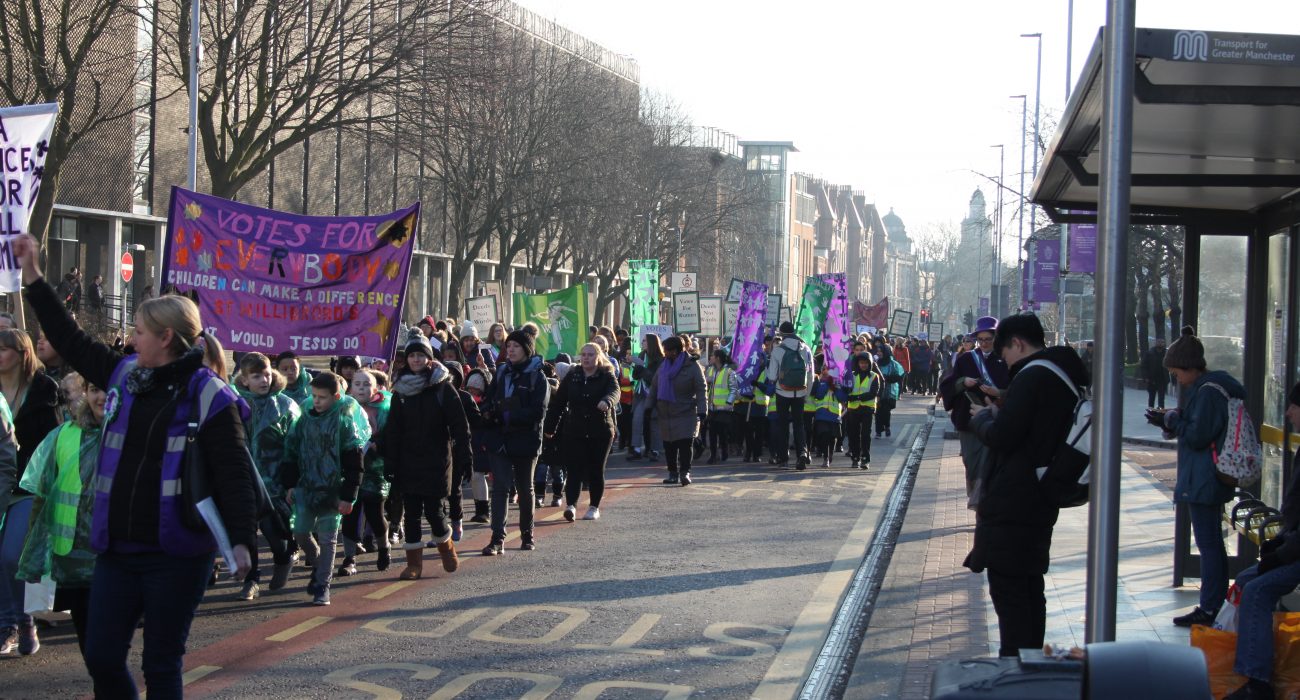 Our Emmeline March. Photo: The Mancunion

Our Emmeline unveil marked by march

A statue of Emmeline Pankhurst, one of the founders of the Suffragette movement, has been unveiled in St Peter’s Square.

The unveiling was marked by two marches converging on the city centre square, with one originating at the People’s History Museum, Spinningfields. The other began at the Pankhurst Centre, near the Whitworth Art Gallery. The ceremony featured a performance from the Manchester Community Choir, as well as speeches from those instrumental in bringing Our Emmeline to St Peter’s Square.

The procession was led by a horse and cart, with ‘VOTES FOR WOMEN’ written on the side.

In the ceremony, it was revealed that 94-year-old Nancy Sawyer was prepared to chain herself to railings to stop any disruption from Metrolink trams derailing the proceedings. Emmeline’s great-granddaughter, Helen, also spoke at the event.

Pankhurst was selected to be commemorated by a public vote, and received funding from a variety of sources, including the Government’s Suffragette Commemoration fund. The statue was created by Hazel Reeves, and was first proposed by Didsbury Councillor Andrew Simcock, who said: “We are delighted at how many people came together for the unveiling of Our Emmeline, an event that has celebrated the legacy of those who campaigned for the right to vote and remembered their sacrifices and bravery.”

In her speech, Hazel Reeves addressed Emmeline directly, saying “Emmeline, we need you as much as ever, back on our streets, continuing to inspire us all — women and men—- to rise up and demand gender equality and demand the end to violence against women.

“We need, today, to channel your passion, courage and determination and take this back into our lives – into our homes, into our communities, into our workplaces.”

The statue, named ‘Our Emmeline’, is the first statue of a woman to be erected in Manchester since Queen Victoria in 1901.

Emmeline Pankhurst was a vital figure in the Suffragette movement, which secured votes for some women a century ago this year. Born in Moss Side, she founded the Women’s Social and Political Union in Manchester in 1903. She passed away in 1928, the same year that both men and women were allowed to vote from the same age. Her home now stands as the  Pankhurst Centre on Denmark Road, a museum dedicated to remembering her life’s work.