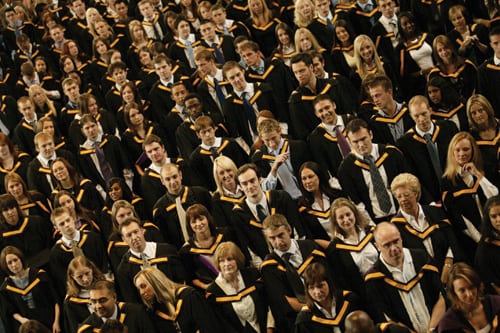 Demand for graduates in the job market has risen according to a report. Photo: University of Manchester

A change in the way students loans are accounted for by the government will add over £12 billion to the deficit.

In a decision by the Office for National Statistics (ONS), the portion of loans expected not to be repaid by students will now be written off as government spending. In the current system, loans are not counted as spending, but the interest earned from them counts as revenue for the government.

The Office for Budget Responsibility (OBR) have made initial calculations on the effect the changes will have, which found that the government’s deficit would increase by “around £12 billion in the current year”. This represents 0.6% of the UK’s gross domestic product (GDP).

The current design of the student loan system, according to the ONS, means many loans will never be repaid in full, as graduates frequently fail to meet the required salary threshold to repay the loan. Additionally, if a graduate begins to earn above the threshold — currently at £25,000 per year — and then falls below this figure, their repayments will stop.

A graduate earning £30,000 would currently repay just £37 per month, or £444 per year, according to the Student Loans Company.

Loans are also written off 30 years after graduation, meaning that many degree-holders who never earn substantially over the threshold will never repay their loan in full. The BBC reported that the amount expected not to be repaid could be up to 45% of the total loan.

In a blog post on the ONS’ website, David Bailey, Head of Public Sector Division at the independent organisation, explained that the decision came after months of consultation “with many other countries and international bodies such as the IMF and Eurostat about how best to treat UK student loans”, due to the fact “the UK’s higher education funding system is almost unique among other countries”.

Heather Proctor, History & Politics Student said: “The loan system is massively flawed because it not only creates a massive hole in the budget when it comes to the loans being written off but a really unpredictable one — a lot can happen to the economy in 30 years which affects how much people earn and therefore how much they can pay back. I mean just Brexit alone will have a huge impact and that’s happening before [current students] even finish our degrees’

“I’m not completely convinced that we should have completely free university but I think a graduate tax system would work much better.”

First-year economics and politics student Josh Sandiford added: “The decision made by the ONS will look to many like the government shooting itself in the foot after hiking up the prices of tuition fees in 2012 and now being made to fork out for the ones unlikely to ever be repaid.

“I think students will welcome this news as it gives the government a clear incentive to cut tuition fees and relieve students of the intense pressure of paying an extortionate £9,000 a year for a university education that many don’t believe is worth it.”

A government spokesperson said: “This is a technical accounting decision by the independent ONS. It does not affect students, who can still access loans to help with tuition fees and the cost of living, and which they will only start repaying when they are earning above £25,000.”