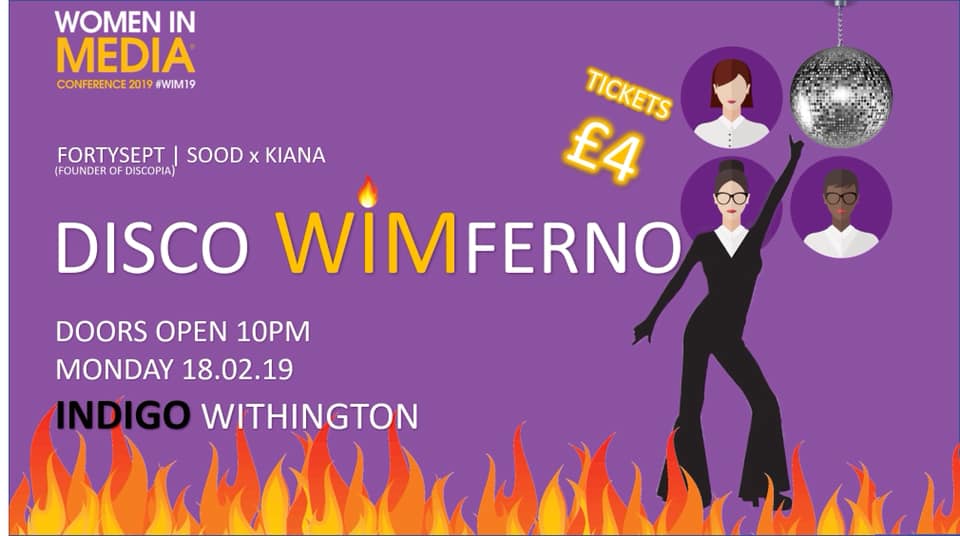 Looking for something to beat those Monday blues? You’re in luck, because the Women in Media team are hosting their second fundraiser, Disco WIMferno on Monday, 18th February, at Indigo in Withington.

It’ll be raising funds for the Women in Media Conference in March, showcasing some top women in the media industry who’ll be hosting a whole range of panels, talks, and workshops. If you’re interested in a career in the media, it’s definitely an event you do not want to miss.

But, before we jump ahead to March, let’s focus on the 18th of February. The night promises some of the very best of disco, funk, and house which, let’s face it, is guaranteed to be a winner.

On the decks will be Fortysept – the founder of big bro events, the home of Discopia. Joining Fortysept will Manchester-based DJ duo Sood x Kiana. Kiana has played at Partisan Collective twice for All Hands On Deck – an all female DJ collective – and was featured at the MisogynyisHate night last semester. Masood Saloo, alias Sood, also produces and dropped his debut track earlier this year.

Tickets for the night are an absolute steal at only £4, so there’s absolutely no excuse not to get on your dancing shoes. Doors open at 10pm and you can dance the night away to your heart’s content until 2am, which is perfect for getting to your Tuesday morning classes.

Bella Jewell, Co-Chair, said: “Our disco themed fundraiser’s proceeds will go towards putting together a truly fantastic conference. The conference itself promises to be an opportunity to learn from some of the best women in their industry.

“The diverse nature of our timetable, packed with panels, workshops, speeches and more will cover a vast variety of areas, from investigative journalism to PR and communications. There is something for everybody, so make sure to buy a ticket for the fundraiser and conference if you can!”

All the funds raised will go towards the Women in Media conference and, in turn, any profits from the conference are being donated to MASH (Manchester Action on Street Health), a charity offering advice and support to sex workers in Manchester. They run a drop-in Centre in the ‘beat’ area, visit women in massage parlours and take the MASH mobile drop-in van out, late at night, around the streets of Manchester and Cheetham Hill to reach women sex working on the streets.

So, not only will you get a weekend of inspiring talks from women in media, you’ll also be helping to raise vital funds to protect some of Manchester’s most in need.

For more information and tickets for Disco WIMferno, visit the event page on Facebook.