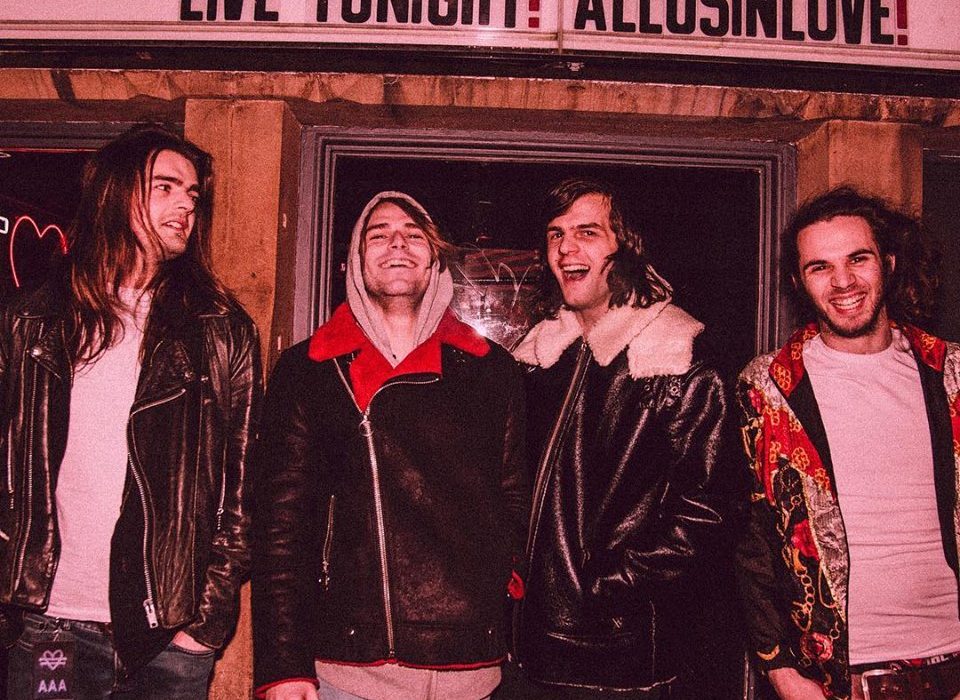 The last year has been very much under the radar for the Yorkshire-based four-piece, Allusinlove. The loss of a band mate and some well-told horror stories from their last tour seem to drive their newfound motivation to succeed as I chat to them backstage before their opening night at Manchester’s basement venue, Jimmy’s.

Paired with a name-change, arguably a new look, and a slight distancing from their heavier metal roots, Allusinlove are approaching the new year with a new attitude to their music. It was a self-described “natural ending”, they explain. After an “unproductive, stagnant tour”, they decided to take a break, re-evaluate and  begin to focus on financial stability as well as good writing. Although they would consider themselves a new band, there are familiar tones, and their obvious work ethic comes across in conversation. They’re optimistic for the future too, with big plans to head to Europe and some big stages over the festival season.

They’re building on a strong foundation; Allusondrugs (their previous moniker) were known for their strong, devoted fan base, wild nights out and energy-fuelled performances. Features in Kerrang! and flattering live reviews were commonplace. But it feels very much like they’re straying into a new scene with their new work, and it’ll be fascinating to see how they take to it.

Their choice of support bands feels initially unconvincing. Opening the night to a practically bare room is Carry the Crown, an unsigned Lincoln-based five-piece that I’m assured has been receiving a decent amount of radio time; it feels like a rip-off of noughties college rock, but massively overproduced, ruining some impressive harmonies, and far from the normal gritty talent featured in smaller venues in the Northern Quarter. Their sound live felt forced, their tracks overproduced and desperately out of place. Their potential is evident, but their new single felt painful live as they desperately fought with the crowd to get involved. As their encouragement strayed into exasperation, it felt like being scalded by a teacher for not participating in another exciting new idea to make us interested in their latest class plan.

Sly Antics have a reputation for being great live, and they didn’t fail to deliver as second supports. The up and coming two-piece have been labelled as ones to watch, and this definitely came across. Controlled but perfectly erratic guitar riffs are paired with strong vocals and form catchy, well-written tracks that warmed up the crowd within a few bars. Their new single ‘Reality’ is impressive; it’s driven, ballsy and sets the bar high for the genre with empowered, coherent vocals which highlight excellent song-writing.

Headliners Allusinlove display their metal roots on their sleeve, which isn’t necessarily a bad thing, and their on-stage charisma seems to stem from experience playing to crowds. Their recorded tracks have serious potential, but this seemed to be lost in their live performance, with their vocals frequently getting lost amongst driven guitar riffs and a driving beat. Popular song ‘Bad Girls’ seemed to lose vocals at times entirely, and their excellent stage presence occasionally strayed into feeling forced.

They’ve moved semi-successfully into noughties college rock, and I want to like it desperately; their tracks are catchy and well-written, but a little piece of me feels guilty, like it’s almost too cliche that a good-looking four-piece of bad-boys are singing about sex and I’m enjoying listening to it. Nevertheless, it can’t be denied that they do it well, their tracks come across effortless and natural and the crowd seem convinced. Track ‘It’s Okay to Talk’ feels more soulful and controlled; there’s a level of maturity that is more evident when you speak to them in person, and which tries to break through in this track – here’s to hoping that this is a glimpse into future releases.

Other stand out songs include ‘Lover I Need a Friend’ and ‘All Good People’, that are well worth a listen, although the latter has so much more potential to sound incredible onstage. This is a band who take themselves seriously, but not necessarily with what they’ve been doing. And I really hope that changes with this tour, because something inside me does want them to push through those teething issues and really succeed.