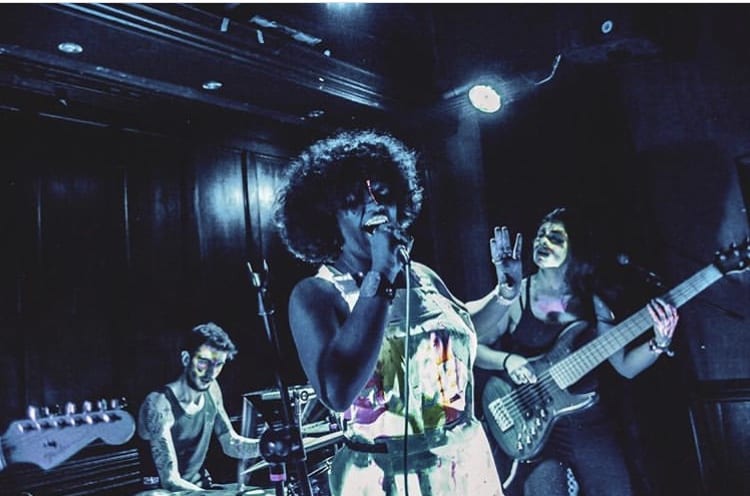 IN-SENSÉ are a typical generation Z band with an incredibly unique sound. Think Jorja Smith vocals meeting Goat Girl bass lines meeting Idles’ punk energy. But instead of sounding like a train wreck, a small niche has been found, and the music is incredibly impressive. This is how I would describe the band IN-SENSÉ, the latest newcomers on the Manchester indie scene block.

As the gig began, the lights in The Castle Hotel were turned off and four fluorescent faced figures took their place on the stage. All that could be seen was the luminous face and body paint on the stage, leaving an air of mystery as to who was behind the paint. It was a great way to start the gig, immediately capturing the attention of the curious crowd.

Despite having no music released yet, IN-SENSÉ were impressively able to excite the crowd, and before the first song was finished people were already jumping and dancing along. Lead singer Sahala Larnyoh had such a charismatic presence, engaging the crowd from the very first note played. She had an aura that many can only dream of and looked more at home in front of the crowd than some artists who have been gigging for a decade. In such a small, intimate venue like The Castle Hotel, being able to make the crowd feel so at ease and engaged is really impressive.

Despite being a very dramatic mix of different genres, IN-SENSÉ were intriguing to listen to. Every song played was a different genre from the next, and many times genre changes occurred within songs too. Sometimes a song would start with a very slow, almost contemporary R&B sound, with borderline pop roots. As the song progressed the bass and drums would get heavier, and the song would slowly become more punk, with rockier roots to it. Lead singer Sahala’s voice was so incredibly versatile and has to be one of the best voices I’ve ever heard from such a young musician.

For an unsigned band who have played very few live shows, the musical talent was undeniable, and after just one hour on stage it was evident that every single band member provided an essential component of a very well-orchestrated and rehearsed quintet who are breaking down musical boundaries and creating their own genre in which they will thrive.

The only minor disappointing part of the gig was the adlibbing from the band in between songs. This included comments about how climate change is real, but it is still a secret, and then something about not liking “honey girls”. Whatever this may mean, it was out of place and confusing. After playing such great songs, this uncanny adlibbing did feel a little random. But then again, this was the first headline gig IN-SENSÉ have ever played and seeing as how flawless everything else was, they are forgiven for not having the best chat for the crowd.

IN-SENSÉ have to be by far one of the most talented new bands around at the moment. To be able to entertain a crowd and have them so compelled by your music despite not having anything released or available to the general public is truly a gift. It is an honour to have them represent Manchester in the music world.