Riot – Civil Unrest is a game that looks at the most carnal expressions of modern human conflict, yet never really comes to terms with its own internal contradictions. Whilst it’s certainly an interesting and mimetic project, it remains a clunky and narratively uncertain piece which frustrates as much as it excites.

Riot, in essence, is a real-time strategy game which sees you take control of either rioters or police, set against the background of real-life riots. The Police, as you might expect, are more tactical: you control small units in each level, but have more powerful weapons. Playing as the rioters is much messier (which may well be the point), and it can be hard to control the throng of protesters from your position in front of the screen.

Whilst the gameplay, in this way, certainly represents what a riot might really be like for both sides, the graphical style does somewhat obfuscate the game in terms of functionality. The blurry, pixelated characters can be very troublesome to differentiate, which is problematic for a game which primarily requires pointing and clicking to get things done. Additionally, the camera and view controls felt unresponsive and unwieldy. 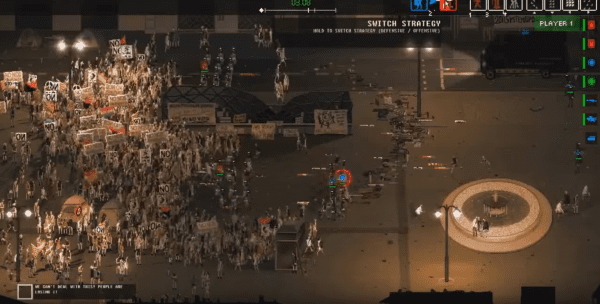 It also simply wasn’t fun. As nebulous as this sounds, I simply didn’t find myself enjoying playing Riot. The interface was hard to navigate and the game felt clunky, while the depersonalisation of both sides created by the blurred art style meant it was difficult to emotionally invest, as did the lack of an overarching narrative. It all felt a little like the gameplay had been contrived from the premise.

I never really got a proper grip of the narrative. Strangely, story mode seemed to have little in the way of story, which was mainly found in global mode, the campaign which sews the game together. Global mode held some appeal, asking you to consider public opinion when making decisions, but was mainly an exercise in repetition, albeit with increasing difficulty. Levels were small and delocalised, giving only a few cursory lines of context. The cut scenes were interesting, but did little to really engage you with ensuing events. More troubling, however, was the fact that this game seemed to so little of consequence about its subject matter.

Indeed, Riot, which I assumed would be politicised to the point of controversy, was mainly anodyne and inoffensive. Passiveness was always rewarded; violence almost always deemed unnecessary. Journalism mode sees you get paid to get pictures, with no expansion on the topic after that. Moreover, the levels were relatively straightforward as you are only ever given one very achievable objective, meaning that you could largely ignore more complicated and morally troublesome mechanics.

I can see why the developers wouldn’t have wanted to push politicisation too far as it would risk dividing an already niche audience, but its failure to meaningfully engage ultimately felt like an opportunity missed, rather than a pitfall evaded.

Perhaps the most profound thing RIOT does is, in many ways, to its own detriment. Riot is almost completely lacking the fun found in classic RTS games like Age of Empires, but this does have the knock-on effect and making the player ask, ‘should a game about riots be fun at all?’ The despair of humanity when in total revolt does shine through in this way; it’s just unfortunate that it’s at the expense of enjoyment.

RIOT – Civil Unrest is available on PC, PS4, Xbox One, and the Nintendo Switch.

There’s plenty wrong with me: The Arkham saga retrospective

A love letter to Rocksteady and the Batman games they made

In the wake of the newest Call of Duty game, the intentions of the ‘keep politics out of video games’ crowd remain as clear as ever