“The phrase I like to use is real-time political thriller.”

I was talking to Pete Bottomley, co-founder of White Paper Games. Having started the interview by suggesting similarities between The Occupation and the 1993 film Groundhog Day, Pete was quick to delineate the differences between the two creations.

“It’s not necessarily that you have to keep repeating the events over and over, or that you’ll have to keep replaying a certain environment to perfect your playthrough or anything like that.”

“Some people can play it over and over again – the game definitely has re-playability – whereas some people will think ‘that was my story.’”

The Occupation is a first-person narrative driven game set over the course of four real-time hours in a fictionalised 1980s Manchester. Essentially a contained wedge of space-time set at the epicentre of a major political event (the passing of a controversial bill called The Union Act), the game casts you as an investigative journalist tasked with finding out the truth at the heart of things.

Having been in development for around four years, I came to Pete with my own red-hot journalistic take that this equated to one year per hour of gameplay. Far from being a reflection of inefficiency, Pete told me that this was a testament to the depth and richness of the game’s world: “It’s hard to quantify detail, but we spend so much time on the universe and we love putting little story threads in that make the world feel like a real and lived in place.”

In an era of gaming dominated by open-world leviathans (often populated primarily by empty expanses), this commitment to making a game that is focused and deep, rather than sprawling and shallow, was something Pete clearly felt was integral to the vision of the studio:

“We’re really inspired by the immersive sim approach to games. Some events are not necessarily directly related to gameplay, just for the sake of flavour. I personally enjoy just getting lost in those types of games.”

Key to this depth in The Occupation, Pete told me, was its North-West inspired geographical and political setting.

“The fictional town in The Occupation, Turing, is loosely based in a Liverpool/Manchester. So we were inspired by the gardens in Liverpool, the Manchester library. In the centre is a courtyard called the Whitworth gardens and we’ve got a library kind of based around the architecture in Manchester.”

Recognise this building? The Occupation is based on 1980s Manchester. Photo: WhitePaperGames

“If you give the world a foundation and background and kind of build your story on top of that, it just helps build a richer world.”

Pete went on to tell me about the narrative setting and the political moorings of The Union Act.

“The game is based around this thing, The Union Act, which is happening on a very specific day, giving that context to the world where everyone is talking about it and what’s right and wrong.”

Key to this idea, however, was that White Paper – as Martin and James had told me in our previous interview – are not trying to create a game which is itself overbearingly political, choosing instead to convey the sense of a conflicted and nuanced society attempting to make sense of obfuscated political happenings.

“It’s not that we need to tip-toe around anything because that’s the setting. But what we do aim to do is create characters in the world that have conflicting views on immigration or data collection or whatever the theme might be.”

“Those conversations are happening regardless so it gives the game a good foundation.”

On top of this, The Occupation will also exist in a shared universe with White Paper’s previous game, Ether One: “We want to create this larger collective universe so you’ll definitely see that.”

“Hopefully, the more games we create – and hopefully it won’t take four years to make another one – you’ll get that sense of a shared universe. They are standalone but it just helps build that world.”

Pete then told me a bit more about what navigating Turing as a player would involve: “The core gameplay loop is you enter an area, you follow these different leads, find some evidence to question someone on, and challenge their answers.”

“Today you came to interview me with a set of questions; the kind of questions that without talking to me about were just things that you were interested in.”

“But if you’d snuck in before this and found a note on my desk saying, ‘The Occupation will never be in VR’, and I’d told you VR was a distinct possibility, you’d be able to call me out on it.” 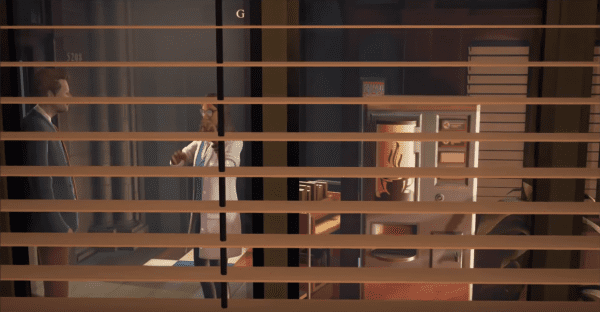 Whilst the roadworks around Salford had prevented me from arriving early enough to do any snooping, I could see through the glass door of the conference room the rest of the team – some seven or eight people – working in earnest on their upcoming project.

Speaking about that more personal side of reaching the end of a game that has dominated the lives of White Paper’s employees for the last four years, Pete said: “At the back end of Ether, everyone was completely wiped out so we had to take a couple of months off just to decompress. On a personal level, that was a massive and emotional thing to put out.”

“I think The Occupation’s different because we’ve been slowly growing the team and tried to help get processes in place, and we’ve built this great momentum.”

“I think everyone will be proud of what we’ve created. No matter what the critical reception is like, we’ll all know that we’ve made a cool game.”

The Occupation, then, is shaping up to a fascinating title when it releases next month. As a fixed-length game, there’s plenty of scope for things to go awry when put into the hands of players not intimately familiar with its design. However, White Paper’s commitment to keenly focused, tightly curated design, immersive and contextualised world-building, and dynamic artificial intelligence should make this one of the indie titles to watch out for this year.