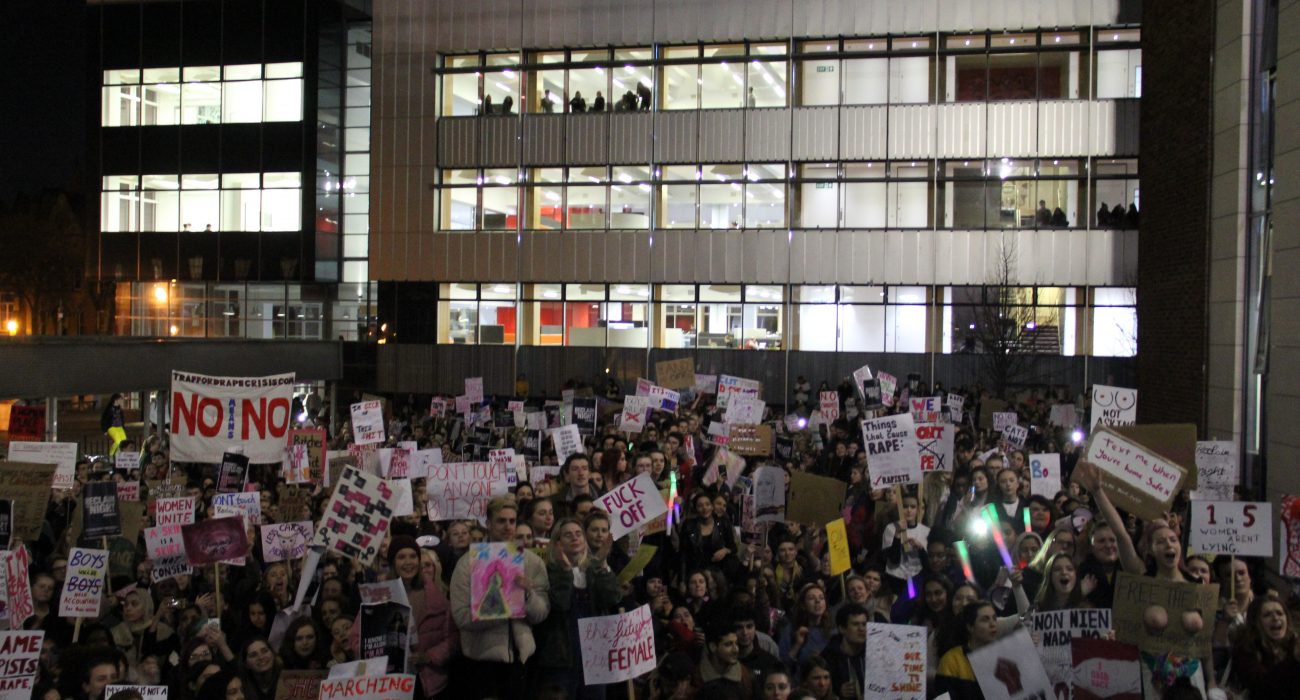 Protestors at the rally following the march. Photo: Ethan Davies @ The Mancunion

Reclaim The Night, the annual Students’ Union (SU)-led march from Owens Park to the SU, has called on Manchester City Council to make women’s safety a priority.

The protest had specifically targeted the Council “improve the street lighting provisions in student areas. We also call for an increased police presence”, “stop the cuts to Women’s shelters and increase funding for local services that support victims”, and “do more to increase awareness of where victims can report acts of harassment, assault, and violence.”

In a speech to the estimated 3500-strong crowd gathered at the Union following the march, SU Women’s Officer Sara Heddi reiterated the protest’s aims.

The march began at 7pm at Owens Park, led by Heddi, who passionately encouraged marchers to sing and express their anger at the current system in place to protect women. The rally following the march drew in hundreds.

Reclaim the Night, led by student and non-student representatives featured a Muslim-only, ‘pro-choice’, youth and families, and an LGBTQ+ bloc, as well as the women-only section in which anyone identifying as a woman could participate. If men wished to march in the event they were placed in the mixed bloc which featured all genders, ethnicities, and religions.

In the run-up to the event, SU Liberation and Access Officer Sara Khan raised concerns about the inclusivity of trans people in a statement to The Mancunion, saying: “We need to platform the voices of trans people, and provide political education about cis-normative violence and police violence.”

It had been previously reported that Khan would not march at Reclaim The Night, which was confirmed by her no-show.

In response, a spokesperson for the SU Executive Officers said: “We completely acknowledge the concerns raised by the Liberation and Access Officer.

“The SU Executive Officer team would also like to express that no concerns were raised during the executive team meetings when discussions about Reclaim the Night were brought up. The Exec team are surprised about the claims and concerns raised just before the march but are determined to address the concerns the best we can do with the time that we have, and then will look to further improve future events.”

One trans student who chose to stay anonymous said: “Violence against women is obviously something that’s a terrible thing that happens, and I feel as though it happens to all sorts of women. That includes women of colour, trans women, LGBT women, and so on.

“I recognise that sometimes such events that are very broadly about women tend not to have too many trans women or women of colour. I also think The University of Manchester has a good stance when it comes to looking after trans people.”

Many victims of sexual harassment have taken the liberty to post about their experiences in the student populated areas of Manchester on popular Facebook page, ‘Fallowfield Students’ Group’, because many feel the lack of safety protocol by police in the area.

Since 2016, the number of reported cases of sexual harassment have increased by 64% in the UK.  Women who marched on the night called on the Council to encourage more organisations to become hate crime reporting centres, with aims to double the number of Third Party Hate Crime Reporting Centres in Manchester by 2020.

“Manchester City Council works closely with Greater Manchester Police, the Universities and other partners to address student safety across the city. Street lighting in student areas will meet national standards in terms of brightness and coverage but we are always open to discussing with students where and how we can improve.

“We shall continue to work closely with our partners in GMP as well as the charity and voluntary sector to support any and all victims, and work with communities to deliver effective support services.”

“In recent years we have seen an increase in hates crimes. Hate crime is a serious social issue that has a significant impact on its victims, families and the community.

Emilia Jenkins, part-time Women’s Officer said: “I do quite a lot of work around the education on the aftermath of sexual assault and so I think this is an absolutely vital march for people like myself who have been sexually assaulted, it’s just so nice to have a show of support from all the community. It makes you feel like you are not alone which is something I really champion in my work so I’m so happy to be here.”

Anuli Changa, a third-year Law student, who also modelled for the ‘Reclaim the Night t-shirt’ fundraising campaign, added: “I’ve been to the Reclaim the Night march every year I’ve lived in Manchester. It’s an incredible atmosphere of solidarity and fearlessness that everyone should experience. I find it particularly enjoyable that the march takes along the curry mile, notoriously uncomfortable to walk along at night.”

All profits made from the t-shirt sales went to charity Manchester Rape Crisis, an organisation that supports victims of sexual harassment and violence.