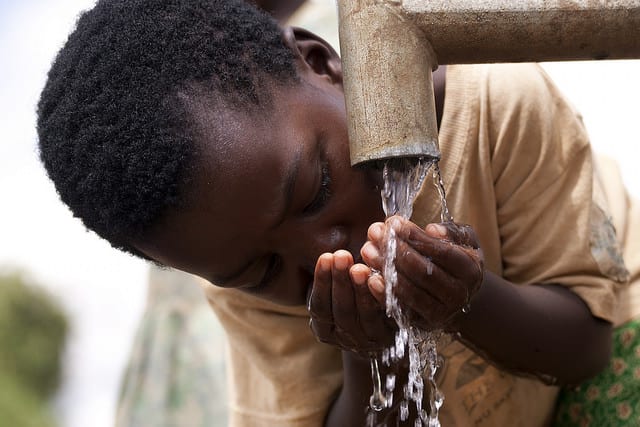 The National Graphene Institute is working to provide clean water

Graphene is a material with incredibly high promise, and a deal struck between the National Graphene Institute at the University of Manchester and water filter manufacturer LifeSaver looks to underline one of the most revolutionary aspects of this mysterious 2-dimensional form of carbon.

A so-called “wonder material”, graphene has seen its intellectual stock rise seemingly inexorably since Manchester physicists Andre Geim and Konstantin Novoselov first isolated it in the mid-2000s. Graphene is a thin lattice of carbon atoms, one atom thick and arranged hexagonally – like a honeycomb. The materials properties are well-documented and manifold: it is the strongest material ever measured, a semiconductor with remarkable electrical properties, and an exceptional conductor of heat. It is found in a somewhat more common form of carbon: graphite, which comprises many layers of graphene stacked together.

Under the spotlight now are graphene’s vast range of potential biological applications. Research at the University of Manchester on thin membranes of graphene oxide has shown that graphene is capable of filtering contaminants from water on a molecular level, trapping organic solvents and other dangerous chemicals. This is a significant improvement on current filtration technology, which is typically able to filter out large contaminants and even bacteria but stops short of stopping individual molecules.

In 2017, Professor Rahul Nair of the University of Manchester demonstrated some of these filtration properties, successfully filtering salt from seawater and dyes from whisky, leaving it colourless.

Filters are conceptually simple. They act like a mesh, allowing water through, and trapping contaminants too large for the mesh’s holes. A key factor for the success of a filter is the size of these holes. Graphene promises to reduce the size of these holes almost tenfold, from around 15 nanometres to between one and three nanometres, vastly improving the effectiveness of removing molecules of dangerous substances as well as biological pathogens.

The aim of the partnership is therefore clear. By gaining access to the world-leading research in graphene filtration done at the National Graphene Institute, LifeSaver hopes to create new water filters and bring them to market. Graphene has so far struggled to make it out of the lab – an intellectually interesting material, but still not practical.

So the next step for graphene is surely its emergence in off-the-shelf products. LifeSaver represents a middle ground between consumers and those looking for bespoke graphene products. Producing high-end water filters, with bottles starting at £89.99 and packages costing up to just shy of £1000, LifeSaver are giving graphene a way into the top level of the market. Nothing starts cheap (look at Tesla).

Water filtration is a key industry. The better the engineering, the less you notice it – and this adage holds true for water filtration for the majority in developed countries. Aside from doomsday preppers and outdoors enthusiasts, the majority of those living in the UK do not need to worry about owning water filters. Yet, there remain over 600 million people without access to safe drinking water. With climate change an ever-present threat, this number may well rise. Even in a world where the infrastructure existed to supply everyone with water, natural disasters would threaten to upset this balance. The need for high-quality water filtration is therefore unlikely to disappear any time soon, and the potential for graphene to play a key role in supplying this cannot be overstated.

By striking this agreement, the University of Manchester and LifeSaver are showing a commitment to producing commercially viable graphene products, and to revolutionising a key industry on which millions across the globe depend.