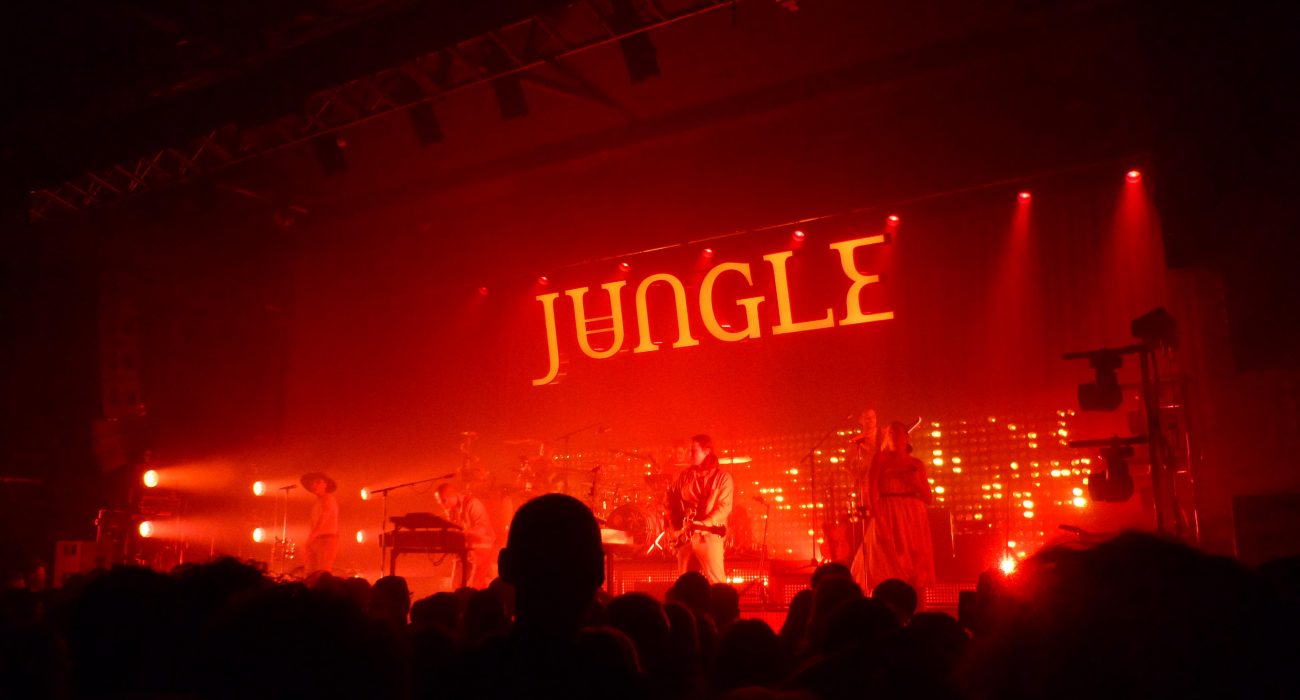 As the lights dimmed and thick smoke filled the Manchester Academy stage, Jungle’s live band strutted out to raucous applause. Their signature graphics hung above the set, shining white through a haze of red. A guitar chord sounded, the drums and percussion started up, and the band launched into the opening bars of ‘Smile’, their latest album opener, singing “When you smile / The world feels a little better / I just wanna see you smile”.

West London duo Josh Lloyd-Watson and Tom McFarland have history in Manchester, having played their debut show at the Roadhouse venue back in 2013. Hailed as “fucking amazing” by Noel Gallagher, their eponymous debut album released in 2014 was cool yet commercial, earning them a Mercury Music Prize nomination. Their brand of throwback funk and modern soul appeals to both an older generation and newcomers to the genre. One identifying with a nostalgic sound of their youth, the other enjoying dance floor-worthy funk tunes for the first time.

Jungle’s Manchester date comes in the middle of the band’s massive worldwide tour, which started in Las Vegas back in September 2018, and is continuing until August 2019. Since their second and most recent album For Ever was only released five months ago, their set is comprised of new hits and old favourites.

After ‘Smile’, came their lead single ‘Heavy, California’. Their preoccupation with the Californian Dream, and the disillusionment they have felt for it, is a running theme throughout the new album, with Lloyd-Watson and McFarland both having given LA a go, before dejectedly returning home. Yet despite the lyrics being about failing to chase the dream — “Can’t afford you… I’m a lonely heart / You’ve been miles away / Held up at the border” — this classic Jungle funk anthem really got the audience grooving along.

Having set the upbeat tone, Jungle then cranked up the glitz. Gold lights shimmered out, illuminating a crowd dancing wildly, hands waving above their heads in time with ‘The Heat’, the lead single of their debut album, before jumping to a big crowd-pleaser ‘Julia’. The disco beat kicked in, as they crooned lyrics describing the perfect girl they desperately longed for – “Julia / I don’t know a thing about you…Soon enough / You’ll be all I ever need”.

The previous songs seemed to act as a rousing intro to the standout track of the latest album, ‘Happy Man’. Belting out the lyrics “Buy yourself a car and a house to live in… Buy yourself a dream and it won’t mean nothing” certainly got the crowd singing along, but words condemning consumerism would have felt more authentic from another band considering Jungle’s best known track was used in an advert to sell cars.

Having ended long relationships whilst writing For Ever, it is unsurprising the album chronicles heartbreak and grief. ‘Beat 54 (All Good Now)’ played next, offering a slower sound to accompany devastating lyrics: “I never had enough for you/ But you said someone/ Would come and replace me/ How can you replace me”. This melancholic mood continued with ‘Cherry’, an even slower track featuring the chorus, “You’re never going to change me”, sung on repeat, and leading into ‘Pray’, a song about taking charge.

The following tracks ‘Lucky I Got What I Want’, ‘Platoon’, ‘Crumbler’, and ‘Lemonade Lake’ notably favoured style over substance, and were found to be lacking since neither McFarland or Lloyd-Watson possessed the vocal range or sonic style to convey the depth of feeling needed to give the songs conviction.

While the break-up theme continued, the calibre of song improved with ‘Casio’ – a funk number filled with falsetto that had the crowd clapping along to the beat – and ‘House In LA’. Grand crescendos and buzzing synths filled the venue as the band exited the stage during ‘Drops’. The crowd were having none of it, begging for a fitting encore, which was provided when the band came back out to finish with flashing lights, the well-loved chorus of ‘Busy Earnin’’, and the blistering guitar solo from ‘Time’ — providing that epic assault of the senses all gig-goers long for.