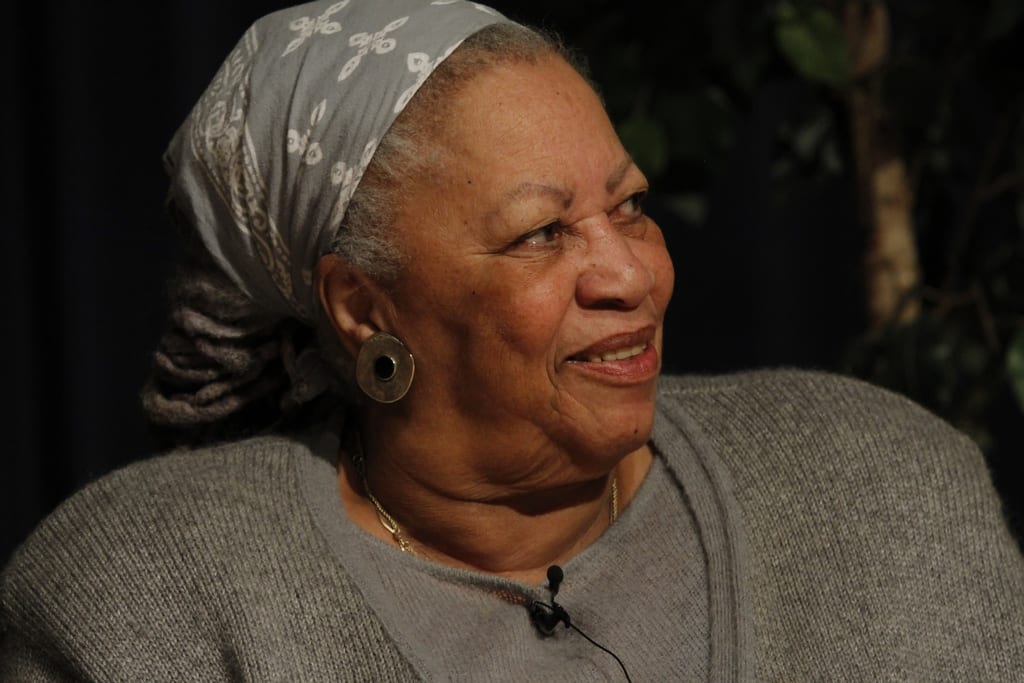 Toni Morrison has released a new collection of essays, speeches, and meditations concerning issues of race, gender, and globalisation. Structured into three parts, she explores the subject of writing and reading, while also expressing concern over the current American political climate, the role of the media, and the importance of the artist.

Morrison reveals in Mouth Full of Blood how writing is a necessity rather than a gift to society. Artists and their work are suppressed and censored because they are threatening. Acts of art, according to Morrison, reveal the underbelly of society and its flaws and blemishes we see every day in the forms of race, gender, and sexuality.

‘The Slavebody and the Blackbody’ is an essay in which Morrison asks the question: are the slavebody and the blackbody different from each other? The slavebody is slavery, as an institution and a major part of American history both culturally, socially, and politically. The blackbody is the African-American who is meant to be enjoying the freedom and liberty won after the abolition of slavery and desegregation.

For Morrison, slavery and racism “are two separate phenomena”. The origins of slavery are not necessarily racist — slavery as a form of commerce and capitalism has existed all over the world at many different times. For example, the ancient societies of Greece and Rome were economically built on slavery, and slavery existed in the form of serfdom in eastern Europe. “Selling, owning people is an old commerce”, regardless of race, religion, and ethnicity. Everyone is implicated in the institution of slavery. Morrison highlights how through a form of racism based on transcendent whiteness, the slavebody has disappeared and morphed into the blackbody, becoming a synonym for criminality, poverty, and a “flash point for public policy.”

One chapter in Morrison’s book that stood out to me was ‘Cinderella’s Stepsisters’. Morrison uses the fairy tale of ‘Cinderella’ to highlight the violence women inflict on one another professionally, competitively, and emotionally. In the politically and culturally charged climate of today, in which the #MeToo movement reverberates, and countless stories of sexual abuse and harassment come to light, this chapter induces “feeling[s] of urgency”.

The fairy tale is about a household of women who are gathered and held together to abuse another woman. Morrison’s tone of controlled anger and urgency highlights a problem in society that must be addressed. Yes, we are moving in the direction of freedom, but with this freedom comes the responsibility to free others, including other women. Morrison encourages us as a society to not do things out of self-fulfilment, but rather to take actions you see as unsafe. These actions with risk carry the most value.

Moreover, Morrison makes the point that women should not have to suppress or erase that part of themselves which is traditionally stereotyped and cause for gender discrimination in a heteronormative society. Women should not “enslave [their] stepsisters” with their personal ambition. Women should be nurturing and caring towards their stepsisters and not sacrifice that part of themselves in order to overcome difficulties in the professional and domestic worlds.

Mouth Full of Blood offers a powerful and artistic insight into today’s society by looking at both the past and present, and issues – cultural, societal, and political – that must be brought to the forefront in order to attempt to resolve them. Morrison argues that as readers, we should not be merely participants in the narrative but also help write it by being attuned to what she calls the “invisible ink”.

The ‘right’ reader can see the hidden lines beneath and around the text instead of making instant assumptions. This reader is not passive. According to Morrison, race and gender have certainties — there exists certain expectations, reactions, and projections when it comes to race and gender. When given facts and information such as place, livelihood, and personality, gender and race are assumed and imposed on a character even when such details are never revealed. The ‘right’ reader can look past these certainties and read the “invisible ink”. Reading therefore becomes an art in itself.

Morrison’s collection of essays, meditations, and speeches delivers unwavering truths about society in the past and in the present. Spanning five decades, the pieces in her book emphasise her incredible ability to analyse and comment on issues like race, gender, politics, and culture with controlled anger, a wide range of knowledge, and hope. Mouth Full of Blood is a reminder that many questions are still left unanswered and that there is much work still to be done to deal with the past and work towards a future where everyone can read the “invisible ink” of society.