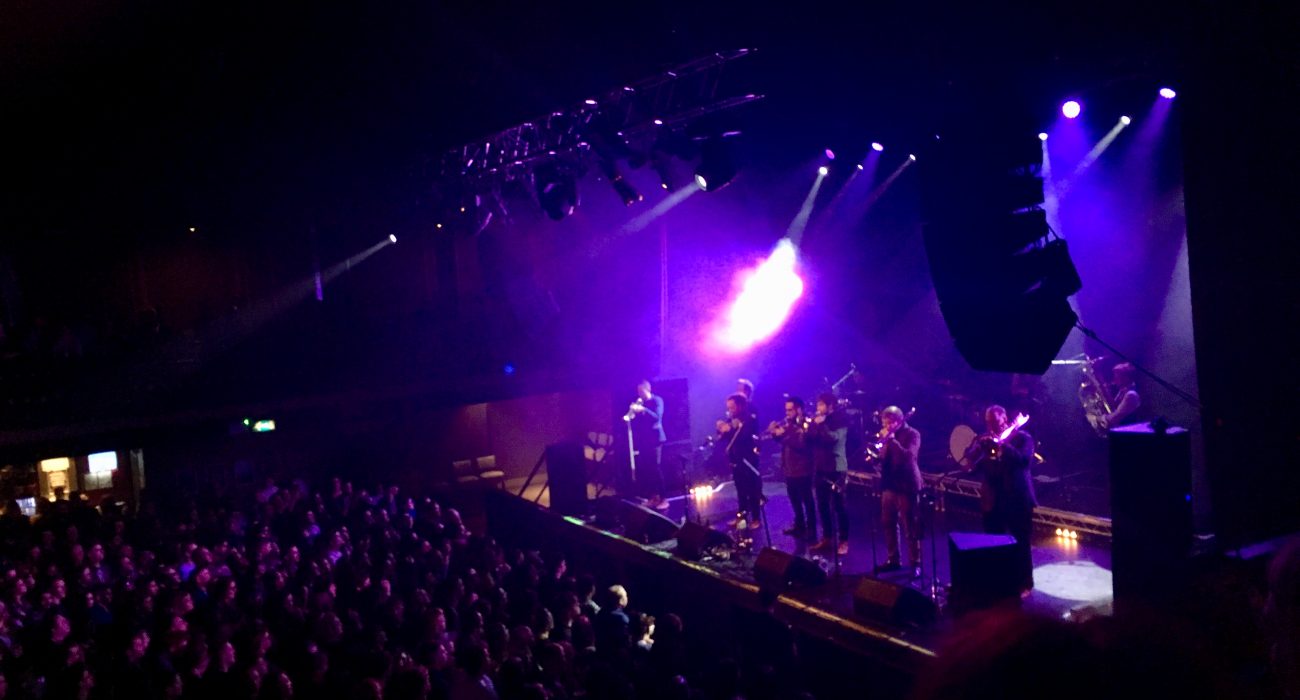 Sold-out venue? Check. Legendary debut album from a mammoth band? Check. Legion of brass instruments to perform said album in its entirety… What?

The legion of brass instruments in question makes up Old Dirty Brasstards, a ten-man (that is, seven trumpeters, two drummers and a tuba player) ensemble gang from South East London. Tonight, as part of a string of nationwide gigs of the sort, they arrive at the O2 Ritz to perform Arctic Monkeys’ 2006 debut Whatever People Say I Am, That’s What I’m Not from start to finish.

Arctic Monkeys haven’t paid the Ritz a visit since 2005. Instead, they have since preferred to sell out multiple dates at Manchester Arena in a matter of seconds. Still, it’s abundantly clear that a retelling of the early tracks is welcome to echo around the venue once more.

Whatever People Say I Am, That’s What I’m Not, now over 13 years old, is not a timeless record. Its scrappy attitude and references to Sheffield night clubs are not things you’re going to find in 2019 releases, even among the indie circuit. But this is no insult. The album was record-breaking, sweeping the charts to become the fastest-selling debut in British music history.

It’s a testament to how adored Whatever People Say I Am remains to those who witnessed the original hype that most of the crowd here tonight were probably about sixteen upon its release. The fact that they have journeyed out on a weekday night just to watch another band cover it shows the dedication to this beloved time in music.

There’s no support tonight. Rather, Old Dirty Brasstards go solo and split the album into two sets. The album, of course, is the home to a number of colossal tracks from indie-rock past. A trumpet-led ‘I Bet You Look Good on the Dancefloor’ naturally is a singalong highlight of the night, sparking ignition in the audience early on. Flip to the other side of the LP and ‘When the Sun Goes Down’ has the same effect. Whilst notoriously an all-killer-no-filler album, however, even Whatever People Say I Am can’t escape a small helping of mostly-killer-some-filler when its less in-your-face songs are played through alien instruments.

There’s a sense of true camaraderie on stage that you’d be unlikely to find on a real Arctic Monkeys stage, whether in their sulky teen days or now, as choreographed rock stars. During the drum solo of ‘Perhaps Vampires Is a Bit Strong But…’, the other nine members head off stage and can be seen gleefully cheering on their bandmate from the wings. The joy of performing is clear, with each performer getting in on the on-stage banter and beaming. Perhaps as a self-described “tweed-clad 10-piece drum and brass powerhouse” it’s not every day that you find yourselves selling out one of Manchester’s biggest venues.

Of course, at £15 a ticket it would be hard for the troop to get away with just playing 13 songs. To loud cries from the crowd for more, Old Dirty Brasstards waltz back for three more.

The surprise feature of AM’s ‘R U Mine?’ launches a tizzy of excitement on the floor, but it’s the harping back to the good old days of ’07 that re-revs the nostalgia. Hit single ‘Fluorescent Adolescent’, apparently sounding like a closing number of a rom-com when performed on brass, follows. Closing tonight’s kickback to the indie heyday of the noughties is ‘Brianstorm’, in all of its percussion-led glory.

Take any half-decent album and play it with trumpets and the novelty is going to make it, if anything, fun. Take one of the most iconic British albums of the century and it has the potential to be a full-blown riot.