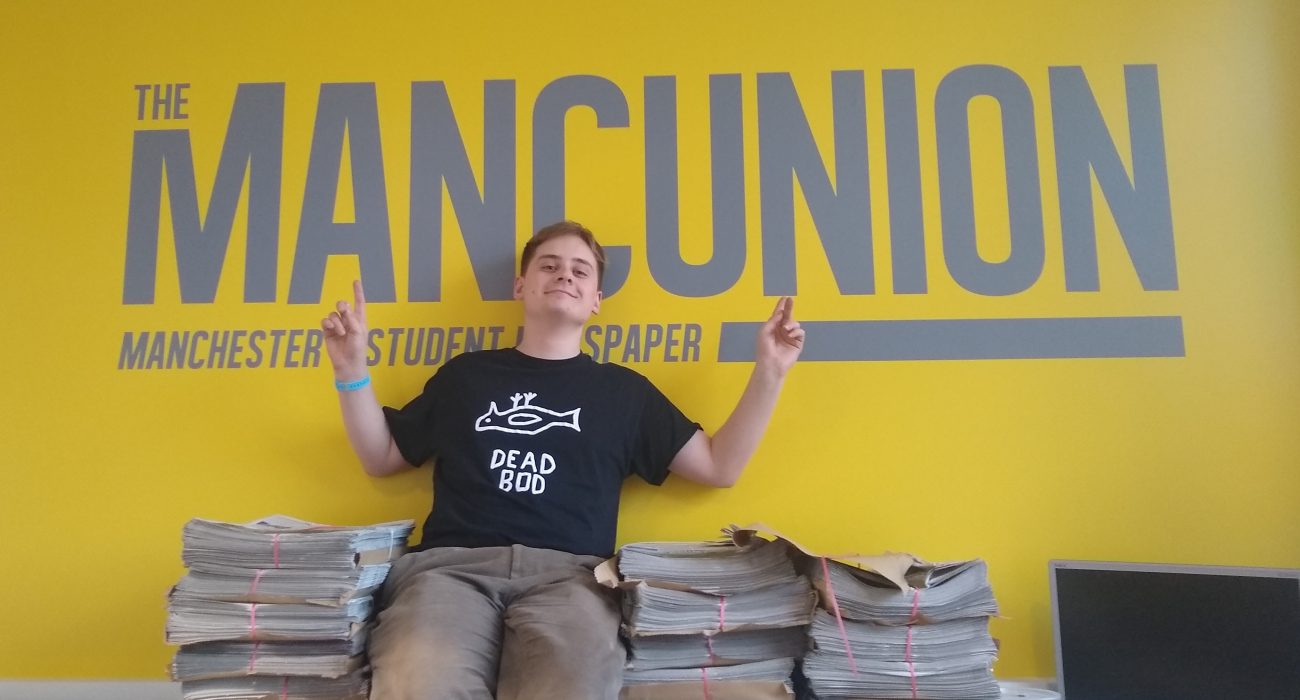 This is it: It’s the final issue. As such, we thought we’d save the best (if we do say so ourselves) until last – we’ve brought you an exclusive interview with the man, the myth, the legend that is Ethan Davies, Editor-in-Chief of The Mancunion and Head of the Manchester Media Group (MMG). From humble origins in Hull, he’s climbed to the dizzying heights of being (technically) my boss.

So, I find myself wondering, what does Ethan actually do? Well, apart from sitting in the office all day eating hummus, as he was doing throughout this interview, it turns out he actually does quite a lot.

He’s in charge of the Manchester Media Group, which broadly involves supporting the direction of Fuse FM and Fuse TV, including stuff like buying equipment and putting the committees in contact with the right people. He’s also an integral part of the Women in Media team – not just Venue Liaison – meaning he does a lot of the stuff that involves the SU’s endless minefield of rules and procedures, like sorting out those inevitable invoices.

However, his biggest responsibility is producing The Mancunion, from September until this, the final March issue. He estimates it takes up a whole four-fifths of his time, from sorting out any legal problems the paper might encounter to making sure all us section editors actually have stories for the week.

He also spends his Thursdays and Fridays sub-editing and publishing articles, alongside helping to design the paper itself, before it all gets checked over to make sure there aren’t any mistakes. On top of all this, all SU interns are expected to help out with student-focused activity like the elections or May’s Awards Ceremony.

“It’s an intern position, which there are about five or six of every year, and because we’re all either in the middle of studies or have just graduated, we kind of have our finger on the pulse when it comes to student opinion,” he explains.

When I ask his if he’s enjoyed this year, he takes a moment to think — and crucially eat his hummus.

“Was it playtime? No. But I have enjoyed this year. It’s been very testing at times, which I knew it would be [when I started], but overall it’s been pretty successful. For one, I can now budget for hummus. Two, the paper’s done really well and I’m really pleased with everyone because they’ve all pitched in.

“Myself and Amy, who’s our wonderful Deputy Editor, said we wanted to make it the best student newspaper in the country [when we started] and everyone seems to have gone for it. Everyone, from the paper deliverers to the section editors, has really helped each other and made sure nobody’s been left behind. The contributors have made the editors’ lives as easy as possible and the design team, for a new team, have been absolutely stellar.”

The design team has been one of the biggest changes that Ethan’s made this year, with the introduction of the culture section and photo essays, which he doesn’t think you’ll find in any other paper throughout the country. In addition, he’s also introduced the new marketing team, who have managed to grow The Mancunion’s reach by about 900%.

As mentioned, he has other duties, too. On the Fuse FM front, though they’ve faced challenges with equipment, Ethan believes they have faced up to them admirably. Going from a cupboard in the basement to a fully-fledged studio was always going to have teething problems, but this year has really been all about getting everything ready and working for next year, he says.

Fuse TV were given central funding during the refurbishment of the SU for new setups. However, for a variety of reasons, it’s only just being finished up now.

“If I had my time again I’d probably try and be a bit more pushy to get that completed; it’s probably my biggest disappointment of the year. I’m glad it’s there though, because the committee has done a great job this year so, next year, the people coming in will know more about the opportunities available to them.”

One of Ethan’s highlights of the year was the Women in Media Conference. If you didn’t go, you definitely missed out. It was a weekend full of workshops and talks from some incredible women in the media, and was a huge success.

“I’m quite a panicky person and to see it actually work was pretty good. Also, my mum came and she enjoyed it, so that’s a vote of confidence.”

“The Reclaim the Night issue was also another massive highlight. It was a really well-designed issue for one thing, it was really bold in what it was saying. There was also a lot of controversy around one of the exec officers, but we decided to go for a positive outlook on it and support the event rather than focusing on the controversy, in a way that a lot of national and regional newspapers wouldn’t have done.”

The paper has already won two regional awards this year, and hopes to win more in the nationals in a few weeks’ time. The only people that beat the paper to awards were Durham’s Palatinate, who were named the Best UK Student Paper last year, so there’s certainly stern competition in the Northern region.

As for why you should join MMG, “if you’re the kind of person who feels like they went out a lot in first year, stayed in a lot in second year, and now thinks it’s their last year and thinks they need to do something, you’re always welcome, and having that extra year’s experience really does help.

“Having said that, we’d love to have more first and second years to get involved. It’s nice to have a different set of friends to your house or your course, and you’ll get loads of employable skills, like learning how to work in an actual office.

“It’s not easy, because we want everyone to do as well as they can, but we have fun with it. We’re not cliquey, we just get on with it and try and make you a better journalist, presenter, or producer.

“If you do want to go into journalism after uni, you’ll find everyone has done student media in some form or another and, especially in Manchester, they’ll remember The Mancunion, or Fuse, and that network can really help you.”

Although the print run has finished for The Mancunion, Ethan still has months left in his role, so what does he envisage next?

“We’ve got some great ideas on how to improve the website and some cool things in the works that are currently under wraps, so stay tuned. The problem for the new team is that we’ve had such a great year, but you can’t always rely on having a story like ‘Clapgate’ to help get you there. You need to work out how you can keep people interested without a story that’s quite as dramatic as that one.

“Fuse TV are going to do really well next year, especially with the new equipment putting them on an industry level, and the fact that their volunteer pool has gone up by four-times this year.

“Fuse FM are quickly establishing themselves as a great events organisation, which is re-defining what a radio station should be. It’s not just people playing their favourite records every week, it’s now a real cultural hub.

“That’s one of the most exciting things about MMG. You don’t really know what’s going to happen until it does, because students have better ideas than a lot of people. The challenge is making sure that other students care enough about them.

“It’s kind of like if three years ago, if you’d worn Fila Disruptors around Fallowfield, you’d have looked really stupid. But after the first person did wear them, they caught on. So yeah, we’re like that.”

For Ethan personally, he’s looking forward to a break. He says that because he’s a June baby, he can afford to take some time off, which he will definitely be doing. It’s been a really busy and really rewarding year, but it’ll be nice to take a step back.

“It’d be a mistake for me to dive straight into something else because I don’t really know what I want yet. I’m young; I’m free,” he gleams.

When I ask him if he has anything to say to the world at large, he says he’d like to thank the readership for sticking with us all year, through the good times and the perhaps slightly less interesting times.

“Let’s face it, journalism can sometimes be boring, so thank you to everyone for actually reading throughout the year.”

“To the team, you’ve made this year as painless as possible. We’ve not had a single legal problem, badly designed issue, or a bad week for a section, so thank you for that.

“I feel like it’s really part of the student community and I’m really glad people care. We’re doing this [interview] just after the election controversy, but the only way issues in the uni can be changed is if you’re informed about them and you care enough to actually tell someone that you do care. If people can stand up and speak up it will get better.

“Read The Mancunion, listen to Fuse FM, and watch Fuse TV, because it’s your future on the line.

“If we start caring more, the world will be a better place.”

And on these poignant words, hummus finally finished, he leaves.