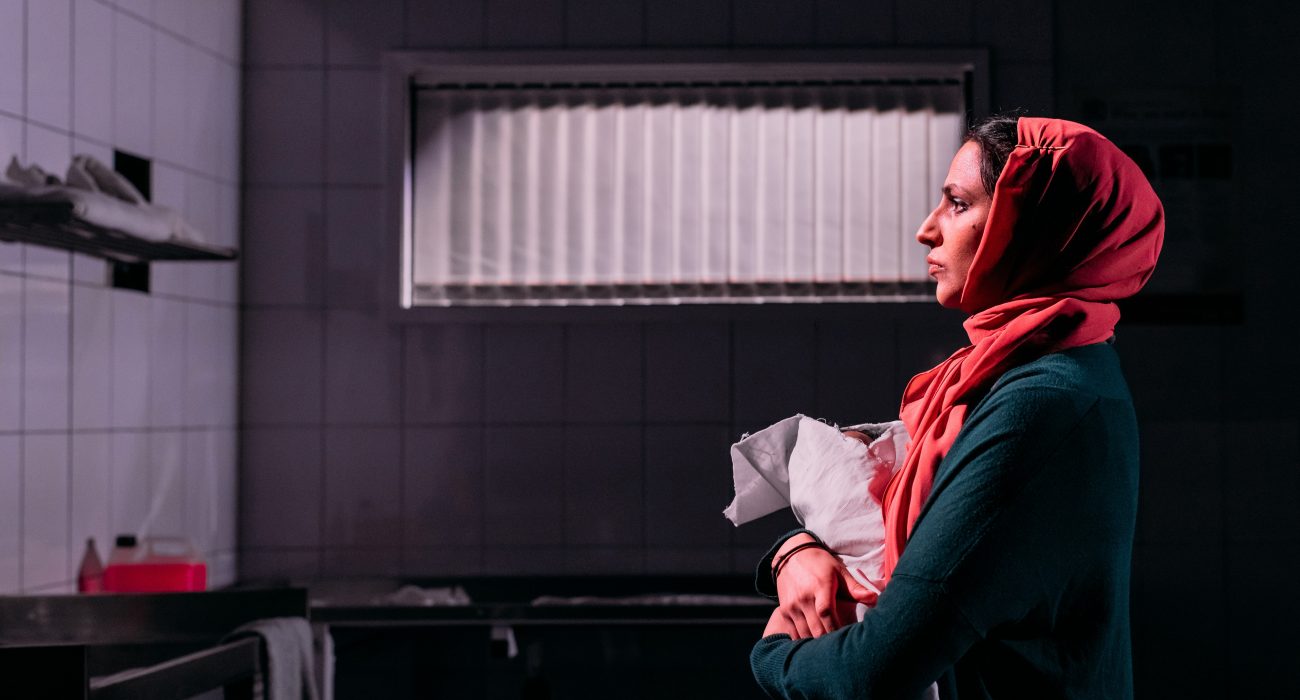 The Funeral Director is a new play by Iman Qureshi and directed by Hannah Hauer-King, fresh from its run at Southwark Playhouse (London). This was an emotional play which, through a series of drawn-out, naturalistic, personal scenes, discussed intersections between different minority groups.

The play opened with a woman, Ayesha (Aryana Ramkhalawon) crossing the stage and lovingly singing to a baby with beautiful lighting created a purple tint on her figure. It was as the stage brightened that we were introduced to the bitter truth: Ayesha runs a Muslim funeral home, assisted by her husband, Zeyd (Assad Zaman), and this baby was a corpse she was treating.

The inciting action for the plot occured when a young white man, Tom (Edward Stone) arrived at the funeral home, seeking to bury his Muslim boyfriend traditionally. Though only referred to as his “friend” and “flatmate”, it is evident to the audience, and to Ayesha and Zeyd that this was a gay couple, leading them to turn him away. This leads them to become involved in a legal battle on the grounds of discrimination.

However, it becomes clear to us that Ayesha has a personal relationship to the case, which we see through her passionless marriage and her closeness with a female childhood friend, Janey (Francesca Zoutewelle). Ayesha is a closeted lesbian and as well as following this main plot, the play is Ayesha’s journey of self-discovery and learning to balance her sexuality and faith.

The play provided a unique perspective on topics of homophobia and islamophobia, focusing on individuals in a small town rather than on a national level. Qureshi’s script is punctuated with funny moments such as when Zeyd buys Ayesha a sex toy, explaining it is not actually haram, a moment which apparently went down especially well when students from Muslim schools saw the play. These instances were necessary to create well-rounded characters who can be silly at times, yet they were not so frequent that they took away from the serious themes discussed.

It was also wonderfully refreshing to find a play that does not condemn Islam as absolutely homophobic, nor does it erase islamophobia. Many pieces of media suggest that Islam is an overwhelmingly repressive religion and LGBT people with a Muslim upbringing would have to cast off their faith. We learn that Tom’s boyfriend had still believed in Allah, even when his family disowned him for his sexuality, an Allah who was good and had created him this way, and when Ayesha comes out, she exhibits a similar belief.

The play makes a point of having Ayesha wear a hijab, even after coming out. This displays that being a Muslim and being gay are not mutually exclusive, incompatible things. Additionally, we learn Janey’s mother was hostile to her when she came out as a lesbian and stopped Janey being friends with Ayesha, partially because she believed they were in a relationship, but also for racist and Islamophobic reasons. Thus, we see homophobia is not solely a trait of the Muslim community in this town.

In the scene where she tells her husband she is a lesbian, Ramkhalawon’s acting was superior. We watched her through tears struggle to force the words out, then the sense of relief when she referred to herself as a lesbian for the first time.

One issue raised in the post-show Q&A, was the idea of Janey and Tom as white saviours who inspire Ayesha to come out. This was addressed by Hauer-King who explained the cast and crew discussed this and to try to solve it, kept an ongoing dialogue with Muslim communities. She explained how they would have both white characters make naïve and insensitive comments, like Janey saying she felt like a foreigner in her own town. These showed that while others may have had an impact on Ayesha, at the end of the day, they could not entirely understand her experience and it was she herself who powerfully came out.