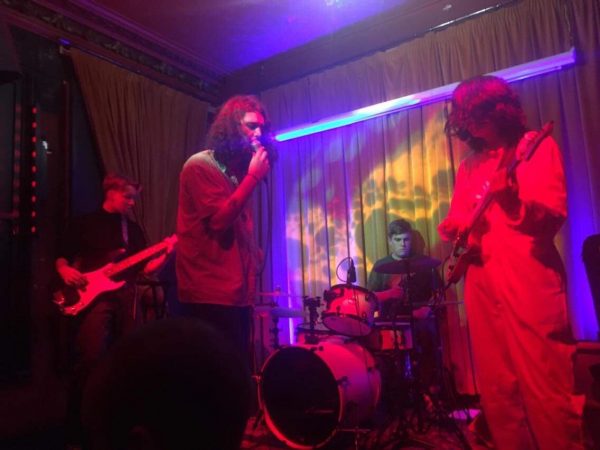 The city of Manchester, home to some of the finest and world renowned rock groups, continues its legacy with the “quintet rock outfit”, Yang Sweeps.

As Dolly Parton once remarked, the 9-5 shift constitutes “making a living.” Yang Sweeps, however, work off hours alongside their studies in an attempt to crawl out of their rapidly depleting overdrafts, and various debts to loan companies.

While the aspiration to make some ‘bags’ is part of the agenda, Yang Sweeps’ music strives to move away from the recurring and repetitive melodies of rock/pop music by exploring the genres of psyche rock to execute an alternative feel – the Yang Sweeps sound.

The Dad Rock EP, released earlier this year, echoes this distinct sound which gets feet moving and heads banging. The song ‘405’ appears to yield to an aspect of the band’s struggle, balancing work for the girl at home is something us students may not quite understand, however, this band knows the struggle, or appears to. Maybe they are actually dads who have seen it all and have returned to retell the tale…

Nevertheless, Yang Sweeps’ inspiration is somewhat contemporary, for those who are fans of Black Moth Super Rainbow, and Tyler the Creator, Yang Sweeps blend the new with classic guitar and chest-thumping drums. For those Manchester students who race around Soup Kitchen on vodka red bulls for Monday’s ‘Remake Remodel’ night, Yang Sweeps also finds inspiration in Prince, Ty Segall, Supertramp, and Slash.

After performing at a range of top venues such as Jimmy’s, Manchester Academy 3, Night and Day Cafe, and many more, it is only correct that the Yang Sweeps’ right of passage is to perform at the iconic Antwerp Mansion.

As a Manchester-based student band, Yang Sweeps humbly embraces their ‘meme’-ish nature. But guys, give yourself a break, we’ve all gotta start somewhere.

I have no doubt Yang Sweeps will end up featured on Soup’s Monday Night playlist, as my own dad remarked, “these guys sound like they should be way bigger than they are.”

Want to check out Yang Sweeps? The Dad Rock EP is available on Apple Music and Spotify, and follow them on Instagram here to explore their quest to fame.