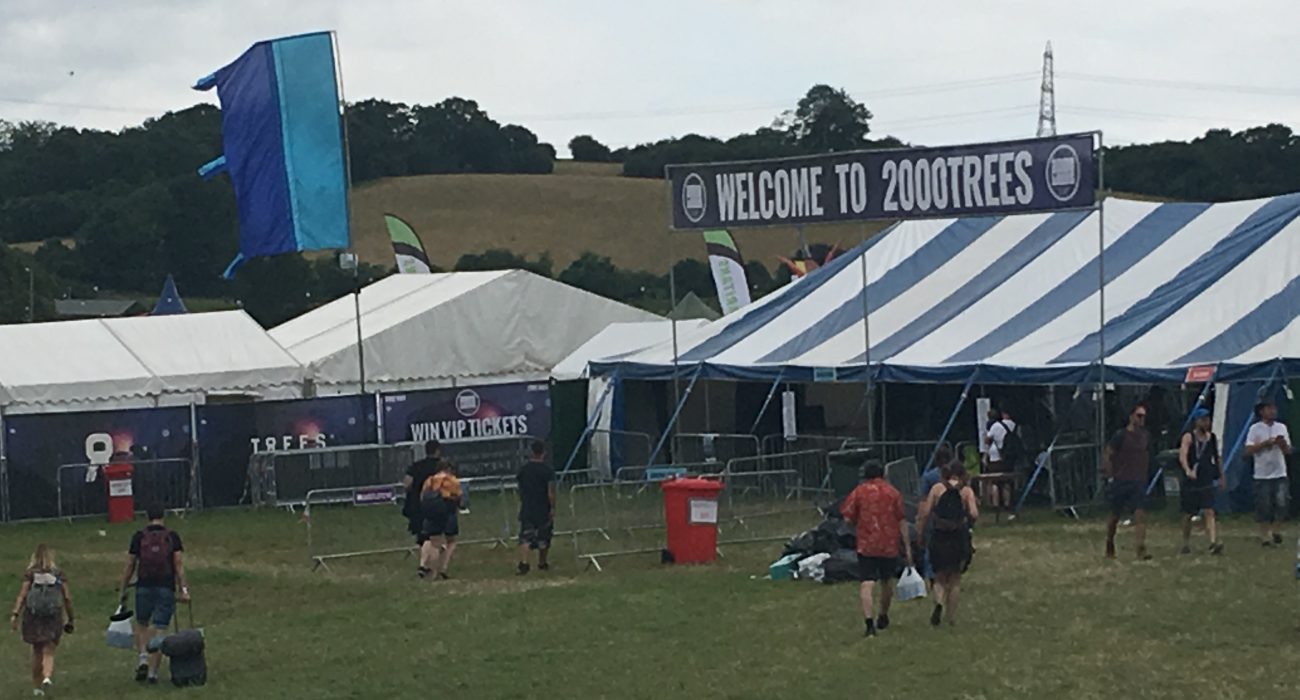 A farm in Gloucestershire sounds, to many, like possibly one of the most boring locations imaginable. However, 2000trees Festival proved all preconceptions false in their 12th year of running, with a veritable legion of phenomenal musicians over three days. The fortune of lovely weather furthered the fun for all involved by providing a lovely setting to watch acts on any of the five different stages spread across the site.

At first glance, the spread of options of things to explore seemed overwhelming, but an understanding of the area came quickly. Even without the stages, there were stalls aplenty with festival necessities; merchandise, all kinds of food (from Italian to sushi to burgers and even breakfast), and the opposite of a small number of bars! Even the massive crowds added to the excitement – far from being intimidating, the swathes of people simply having a good time and enjoying the music only furthered the laid-back but animated atmosphere. Opportunities were also provided at allocated times to meet certain bands; signings were handled efficiently and were well-organised whilst not being rushed.

The stalls themselves functioned on a convenient cashless system; once money was paid through a website, festival-goers simply needed to present the RFID cards on their admission wristbands in order to make payments. Although, any excess amounts left on accounts needed to be retrieved after the festival at a £1 charge, the argument that this is worth it simply for the ease of payment is a strong one.

Throughout the weekend, performers remained energetic and delighted to be there, as well as encouraging an environment of acceptance and positivity. Many acts mentioned their friends as recommendations for artists to watch later and the camaraderie between everyone in attendance was commented on by several musicians, including Sean McGowan and the memorably-named itoldyouiwouldeatyou. There were even particularly emphatic instances of aggressive positivity. The likes of Get Cape. Wear Cape. Fly praised the inclusive atmosphere of 2000trees whilst condemning discrimination in the wider world, whilst Josh Franceschi, lead vocalist of headliners You Me At Six, colourfully criticised the political situation at the same time as praising the crowd.

A main point of appeal for the festival is the constant stream of music to listen to, varying from the more well-known acts playing on the Main Stage to those playing The Axiom, and even the acoustic sets played during the Forest Sessions a little further towards the main campsite. The Forest even hosted performers playing other stages at other times, most notably Deaf Havana, Saturday’s headliner. Despite having a set that evening, Saturday afternoon witnessed a more casual and enjoyably chaotic acoustic performance, which had no pre-planned setlist and included a spontaneous singalong rendition of Robbie Williams’ ‘Angels’.

Standout performances occurred throughout the weekend across the site, from the headliners to some slightly lesser-known bands. As It Is particularly stood out on the Main Stage on Friday evening; their dark aesthetic contrasted stunningly with the golden sunset as they played hits from across their three albums. They pleasingly balanced harder songs, including the hardcore version of their song ‘The Question, The Answer’ from their most recent EP Anger: Reimagined, with a somewhat lighter tone. The showstopping headline act from You Me At Six was truly the only possible way to follow up. Songs echoed across the massive audience from the entire duration of the band’s career, ranging from a singalong to ‘Save It For The Bedroom’ from their debut album to tracks such as ‘Straight To My Head’ from their most recent album VI.

Another particularly memorable performance was given by Frank Iero and the Future Violents on Saturday night. With mosh pits and crowd surfing from start to finish, the set, which was played over at The Cave, was filled with energy and enjoyment throughout. Saturday’s headliners Deaf Havana were no less enthusiastic, and their music was audible from across the site.

Lesser known bands playing the Neu Stage and The Axiom appeared no less delighted to be performing, and brought their own energy and enthusiasm to their performances. The Bottom Line were a particular highlight, with upbeat songs which had even those with no knowledge of the band enthusiastically dancing along and aiding their vocalist in crowd-surfing. itoldyouiwouldeatyou brought hilarious comments to add to the enjoyable, positive atmosphere at their set.

With an enormous variety of performers and a phenomenal number of stalls to look at, there’s always something to do at 2000trees. The continuous music and constant variety across the stages throughout the day all but guarantees any music lover to find at least one act to suit their tastes across the weekend , and anyone exploring will certainly find their efforts rewarded. And, on the off chance that you can’t – there’s always the bars.