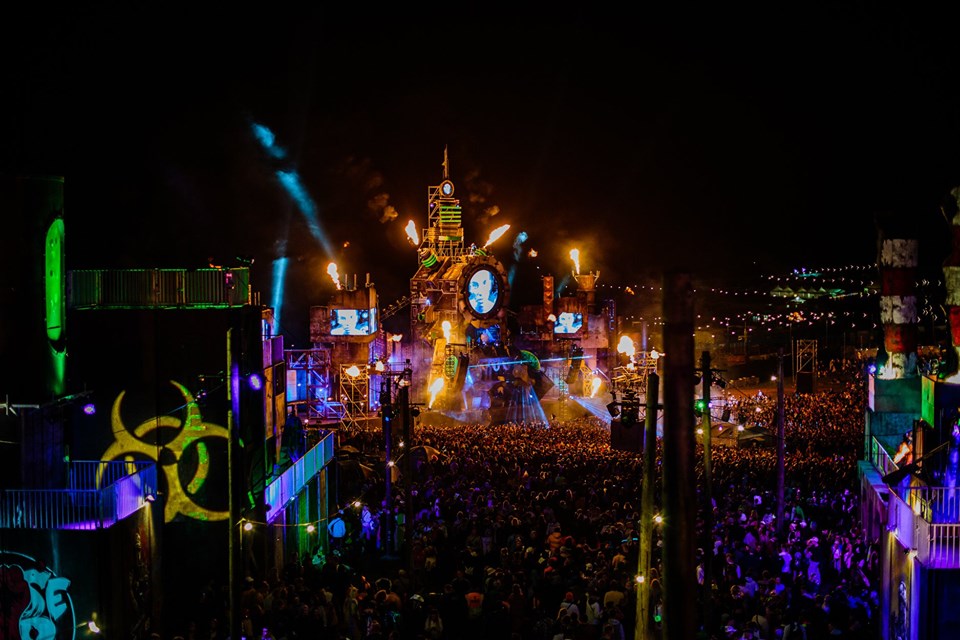 Boomtown enters a new decade, somehow surpassing the expectations gained over the last ten years. Truly a festival like no other, this is not your average trip to the “fair”. Across eleven districts there was certainty something for everyone. However, Boomtown went beyond putting on a weekend of music, with its festival ethos shifting focus towards protecting the environment.

Thursday night saw a strong start to the festival, with a superb performance from Little Dragon. Sat atop Whistlers Green, The Lighthouse stage provided the perfect venue for their unique brand of Electronica. The set was well suited to a Boomtown crowd, with more upbeat versions of songs getting the crowd moving. Improvisation gave their tracks greater depth while still recognisable as Little Dragon. Fan favourites ‘Ritual Union’ and SBTRK collab, ‘Wildfire’ went down a treat as expected.

Friday’s opening ceremony marked the official beginning to the festival. A colourful celebration of carnival culture lit up The Lion’s Den stage, projecting into the natural amphitheatre in which it was nested. The ceremony also conveyed a strong message concerning the ever-growing climate crisis. As part of their green mission, Boomtown, with partner charity Treesisters, pledged to plant a tree for every person in attendance. The sea of people at the ‘Lion’s Den’ would have made an impressive forest on their own, with the whole festival adding up to 66,000 trees!

Friday also saw the brand new Relic stage christened with a highly anticipated Shy FX set. The former headquarters of the fictional corporation, Bang Hai, has been left to ruin and has since merged with the surrounding nature. This was the place to find the biggest drum and bass names of the weekend. As the barriers came down punters charged for a chance of being at the front. Forty minutes in Shy FX’s set was going strong, however high winds were taking their toll on the exposed towers. Ripped from the stage a panel flew into the audience. Those affected seemingly shrugged it off and continued to dance, however due to safety concerns, the stage was unsurprisingly shut down.

The cancellation of Boardmasters festival made headlines the same weekend. Even with weather less severe than Cornwall, Boomtown took a battering from the elements, though the feeling throughout the festival was that clinging on in the wind and rain was preferable to a quiet weekend at home. Sets were temporarily moved from Relic, although it soon reopened to the delight of many a raver.

Those in the techno camp (rather than DnB) would find themselves at home at the Nucleus stage. At the centre of new district, AREA 404, the post-apocalyptic wasteland seemed perfect for techno on a massive scale. Highlights included huge sets from Carl Cox and Amelie Lens. However, topping them all was Four Tet, with Kieran Hebden taking the audience on a journey through electronica. Injected with a techno beat and set to an impressive light show, the whole affair was simply mesmerising. A masterful mix of tracks demonstrated why he is one of best on the scene.

By Saturday morning many festival goers had already been going hard for three nights, with the biggest one yet to come! So, who better to wake them up than General Levy at the Lion’s Den? Perhaps a set better suited to midnight rather than noon, his performance of ‘Incredible’ proved that “Jungle is massive”, no matter what the time of day.

The Lion’s Den boasts being the largest reggae stage in Europe, hosting everyone from legend, Sister Nancy, to the apparent head of the new generation of reggae, Chronixx. Saturday night saw two of the best acts back to back, with outstanding shows from Groove Armada and The Streets. With over two decades of big beat behind them Groove Armada stayed true to their name with one of the most enjoyable sets of the weekend. Hits like ‘I See You Baby’ and ‘Get Down’ never go amiss, with the crowd staying lively throughout. Finishing with ‘Superstylin’ the bar was set high… but Mike Skinner and Co were not to be outdone.

The Streets earned the title of act of the weekend. Every track felt like a classic with fans following every line. The 2002 debut Original Pirate Material featured heavily, having aged excellently. Skinner’s lyricism sums up the best and worst of British culture in a way that still stands true today. Even with success, The Streets remain connected to their audience with the mood staying casual. Antics from Skinner included champagne spraying, drinking fan’s Guinness and an obligatory crowd surf. More notably though was the waterfall cleanse. Skinner climbed into the stage side cascade to perform ‘It’s Too Late’ from above. A set full of highlights came to a close with an encore of ‘Blinded by the Lights’, followed by ‘Fit But You Know It’. Finishing on an unarguable garage classic sent the crowd flying off into the night, but you would be hard pressed to find anything to surpass their set.

Ms Lauren Hill seemed unfit to share the same stage the next night. Having gained a reputation for lateness at Glastonbury, Hill turned up a whole hour late to her headline spot. Some fans may have forgiven her due to her delivery of ‘Doo Wop (That Thing)’ and The Fugees classic, ‘Ready or Not’, during her shortened set. Still her treatment of fans felt insulting considering the quality of acts elsewhere that night.

For example, Downtown district’s Pagoda stage was host to DJ Patrick Topping that same day. Not only did Topping turn up on time, he also delivered a consistently solid Tech-house set for seven hours! Simultaneously the Town Centre was booming with beats from Hip Hop veterans Salt-N-Pepa. Is there anyone out there who would not dance to tunes ‘Shoop’ and ‘Push It’? More than anything, Lauren Hill was a lesson in exploring what the rest of the festival had to offer.

The closing ceremony felt like a sub-par climax compared to most of the weekend. However, how can a festival like Boomtown be summed up in a ten-minute show? Or even a thousand-word review for that matter? With one final message to “Leave no trace”, an outstanding five days of music came to an end. Many unfortunately did leave a trace, with tents and rubbish strewn across the South Downs site. Disappointing to see, but, with a 40% reduction in tents abandoned, the organisers must be given credit for their efforts to create a greener festival.

The excitement for Chapter 12 is already rife, and rightly so. Boomtown manages to create an immersive atmosphere unique to a festival that only seems to be getting better by the year.